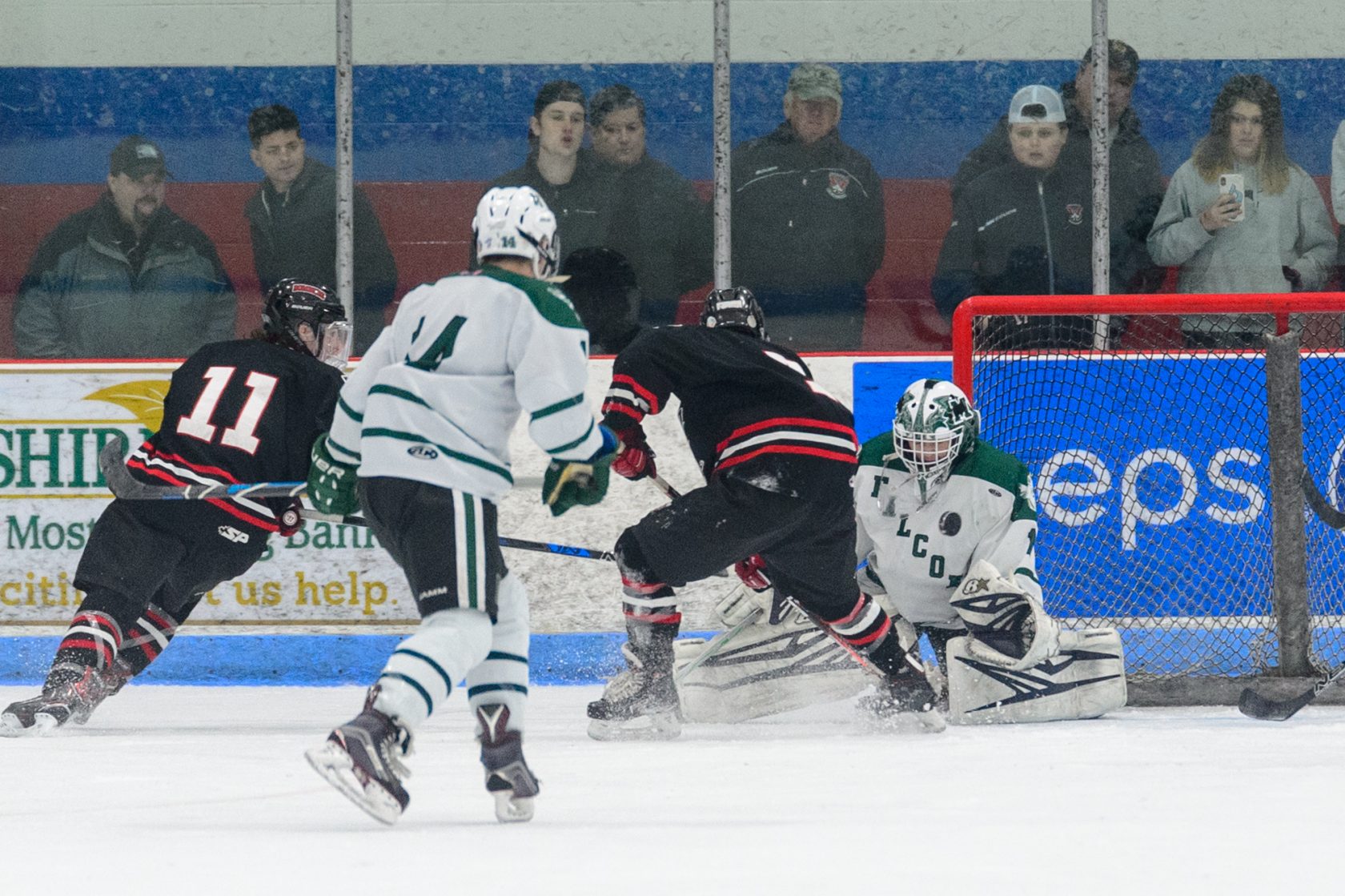 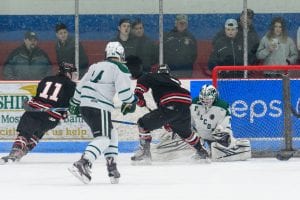 In the second overtime period with the sides at three apiece, Westfield’s Scotty Bussell (11) lifts the puck past the goalie for the game-winner against Minnechaug Thursday night at the Olympia Ice Center in West Springfield. (Photo by Bill Deren)

WEST SPRINGFIELD – Someone who might have stumbled into the rink at the Olympia Ice Center Thursday night might have dubbed No. 3 Westfield’s upset of second-seeded Minnechaug in the West Division 3 boys ice hockey semifinals a stunner, but everyone from the Whip City knows – and as longtime Bombers head coach Moose “C.B.” Matthews would say – that’s Bombers hockey!
Scotty Bussell hammered home the puck on a shot 1:39 into double overtime to lift Westfield to a thrilling 5-4 win in double overtime. The victory sends the Bombers into the finals against familiar foe, No. 1 Longmeadow.
“It was just a gritty goal,” Bussell said. “You can’t beat those, going to the net and picking up what’s left for you.”
Ryan Moorhouse and Gavin Carzello were credited with assists.
“Was it one of our better games this year? No!” Coach Matthews said. “(We had) chances on net, couldn’t finish. … but I’ve been here 30 years and (this was) one of the best. I’ve won a few state (titles) but (this was) one of the best.”
It was an electric start for both teams in front of a frenzied, standing-room only crowd that bubbled with enthusiasm.
Minnechaug (11-7-3) wasted very little time in establishing themselves as the favorite with a goal from Steven Mushenko 32 seconds into the opening period.
Less than four minutes later and just a few seconds into their first power play, Westfield (12-7-2) responded with a game-tying goal on a slapshot from Carzello. Moorhouse and Spencer Cloutier assisted.
Minnechaug reclaimed the lead nearly six minutes later when Peter Wurszt angled an opposite corner top shelf shot that slapped Westfield goalie C.J. Czarnecki’s glove, and trickled into the net.
Westfield responded with another game-tying goal, this one coming 3:13 into the second period on a beautiful shot from Spencer Cloutier on a bang-bang play set up by Bussell.
Minnechaug went ahead again with a power play goal from Mushenko, who stuffed a rebound in with 8:08 left in the middle frame.
While the first period saw both teams deliver their shots evenly at 10 apiece, Minnechaug had a clearcut advantage in the second, outshooting Westfield 13-2.
Westfield, having been to this rodeo more than once before, remained calm, cool, and collected a game-tying goal 1:14 into the third period on Matt Bacon’s shot. Kevin Hosmer assisted on the play. The Bombers finally took the lead on a goal from Carzello with 9:05 on the clock. Liam Webster earned the assist.
Minnechaug tied the game at 4-all with 76 seconds remaining on a goal from Austin Kareta.
Both teams played a scoreless tie with a 4-on-4 setup in the first overtime – Czarnecki made a few key saves – setting up the dramatic 3-on-3 finish.
“It’s just something you work for your whole life,” Bussell said, “to be able to come out here every day, practice hard, and be able to finish like that. It’s unbelievable. …It took hard work. We knew that we had to come out here, be the underdogs and that’s what it took. It’s just such an amazing feeling that you can’t beat.”