WILBRAHAM – The irony was obvious. American Legion Baseball’s Wilbraham Post 286 Blue, after scoring four times on wild pitches, tried for a fifth with two outs and the bases loaded in the bottom of the seventh. The fifth time was not a charm.
Post 124 catcher J.D. Huntley quickly caught up to Stefan Krol’s wild pitch at the short backstop and fed Krol, covering home, a perfect strike to get the incoming Wilbraham Blue runner from third. Game over: Westfield 13, Wilbraham Blue 10.
After losing an 8-2 lead, Westfield Post 124 (11-2) broke a 10-10 tie with three runs in the top of the seventh. Andy Daniels walked and moved to second on a balk. Brian Campbell tried to bunt Daniels to third, but walked on a full count. Next it was Nick Clegg’s turn to bunt and he successfully moved the runners to second and third with one out. Matt Hastings broke the tie with a sacrifice fly to right and Huntley added a second run with a single down the line in left, scoring Campbell. Huntley then scored on Krol’s deep double to center. 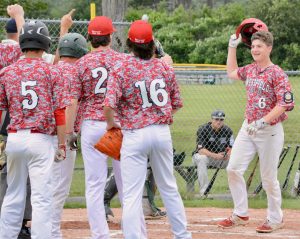 Westfield took a 2-0 lead in the first when Hastings walked, moved to second on a ground ball out, and scored on a Krol double. Krol later scored on a Wilbraham Blue error.
Post 124 added five more in the second, highlighted by Campbell’s 304-foot home run off the foul pole in left, scoring Jacob Butler. Butler had started the inning with a double to the fence in center. With one out in the inning, Hastings reached on an error and scored on Huntley’s single. Krol reached on an error before Jack Blake’s sacrifice fly scored Huntley. Krol scored when Anthony Riga singled over the third base bag.
Hastings drove in the three other Post 124 runs, with a ground ball out to the right side in the third and a long double to center in the fifth. His double was looking like a triple out of the box, but he had to back-track to first after missing the base.
John Daley started for Westfield, going four innings and allowing five runs on only three hits. He walked five and hit a batter while striking out seven.
Westfield will next host Greenfield Post 81 on Past Commander’s Night Friday at Bullens Field beginning at 7 p.m.
Prior to Friday night’s game, Westfield Post 124 will recognize four individuals – past commanders Jack Ashe and Butch Rines for their contributions, catcher Jonathan D. Huntley for his many achievements, and Post 124 manager and head coach Don Irzyk for being selected as the 2017 American Legion Department of Massachusetts recipient of the John Mulkern Educator of the Year Award.