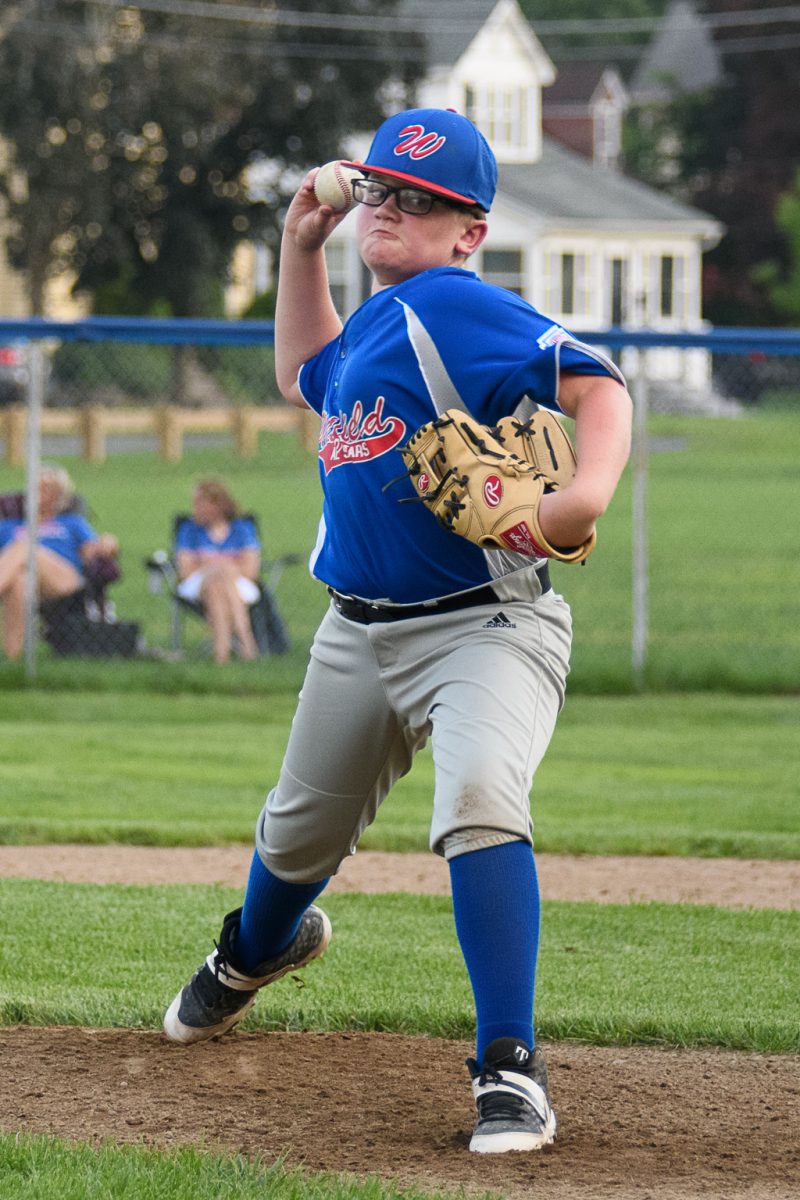 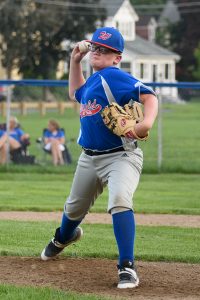 Pitcher Nolan Wondolowski (34) is all business on the mound. (MARC ST.ONGE/THE WESTFIELD NEWS)

WESTFIELD – On a night that ended with a nearby bolt of lightning, Westfield pitcher Nolan Wondolowski delivered an electric performance on the mound.
Wondolowski scattered three hits, struck out eight batters and walked four in five-plus innings to help Westfield earn a 7-0 shutout victory over Belchertown in the Little League Baseball District 2 semifinals Wednesday night at Ralph E. Sanville Memorial Field on Cross Street.
While Wondolowski kept Belchertown off the scoreboard, Westfield’s offense did its part to ensure a “W.” Anthony Sanchez recorded the team’s first hit in the second inning, plating Audrey Amaral, who reached on a walk, with a base hit through the left side.
Westfield loaded the bases in the fourth with a pair of walks from pinch hitters Zac Cook and Luke Cummings sandwiched around a single from Amaral. Sanchez forced in a run by drawing a walk. A wild pitch scored two more. Jacob Barnes followed with a walk and advanced two bases on wild pitches. A RBI single from Logan Csekovsky made it 5-0. A wild pitch, walks from Wondolowski and Porter Marchacos, and another bases-loaded walk, this one from Cook, brought the score to 6-0.
In the fifth, Cummings walked and eventually came around to score on a Barnes RBI single. Wondolowski gave way to the bullpen with no outs and one on in the bottom of the sixth. Just a few minutes later, lightning struck nearby halting the game. A short time later, the game was official.
Westfield advances to the championship game Friday at Strople Field in Longmeadow. First pitch is at 6 p.m.

WESTFIELD LITTLE LEAGUE 10S TOURNAMENT NOTES: Despite losing to Longmeadow in the District 2 championship on the road Tuesday night, the Westfield Little League 9-10 Year-Old All-Stars made a few highlight reel plays, including: Drew Bean and Jakob Elmer making several nice plays at shortstop, including a diving catch by Elmer to end the third inning; and starting catcher Austin Sadowski throwing out a Longmeadow runner trying to steal second as well as two unassisted outs at home as he twice raced to the backstop to pick up wild pitches, turning and running back to the plate, and tagging out two Longmeadow runners trying to score from third. Westfield’s 10s finished their All Star season 4-2 and scored 61 runs over six games, and qualified for the D2 final.