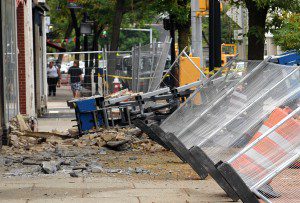 Debris is scattered along the sidewalk in front of 84 Elm Street after the facade of a building collapsed on a construction worker yesterday. The 21-year-old man from Saloomey Construction was inspecting the front of the building, which is owned by Hampden Bank, when the bricks broke loose tipping over the man-lift, which was 10-15 feet in the air. (Photo by chief photographer Frederick Gore)

WESTFIELD – Work to stabilize a crumbling Elm Street building has been put on hold while the owner establishes an acceptable plan, after hundreds of bricks cascaded on to the Elm Street sidewalk yesterday morning, when a worker started to remove some of the bricks which were in danger of falling.
The single story building at 80 Elm St., together with the adjacent two story building at 94 Elm St., became the focus of emergency efforts last week when police reported last Wednesday that bricks were falling from the north wall of the 94 Elm St. building into Arnold Street.
The superintendent of the city’s building department, Jonathan Flagg, immediately inspected the buildings and found that both were structurally unstable and potentially a threat to the public.
The two buildings have been eyed for demolition for years to make way for development of the property around the former J.J. Newberry’s store, which burned more than two decades ago.
The taller building, known as the Block Building, was acquired by the city years ago as part of the project, which will include an intermodal transportation center. The city has been in negotiations with Hampden Bank, the owner of the 80 Elm St., property, to purchase that property, too.
In response to the current emergency, Jeffrey R. Daley, the city’s advancement officer, appeared before the City Council on Thursday to request a $125,000 appropriation from the city’s stabilization fund to pay for the removal of the Block Building and, if necessary, the second building, as well.
Daley told the councilors, who ultimately approved the appropriation, that the city is required by law to take control of the property to protect the public if the owner does not, by noon the next day, develop a plan to deal with the emergency created by their building’s condition.
On Friday, Daley reported that the bank had elected to stabilize the building and had hired a contractor, Saloomey Construction of Westfield
After the long Labor Day weekend, the contractor was ready and started work but didn’t get very far before a section of the brick façade collapsed.
Daley said yesterday morning that the plan was to remove the façade, which was bulging and leaning over the sidewalk, brick by brick, but said “They got about five bricks into it and the whole thing collapsed.”
When the façade fell, the Saloomey employee on the job, Cory Chretien of Ludlow, was working from a scissors lift, which was knocked over by the falling bricks and landed on a car parked next to the sidewalk.
Chretien was immediately transported to Noble Hospital where he was found to have suffered only scrapes and bruises and was released after his injuries were treated.
An inspector from the federal Occupational Safety and Health Administration responded to the scene of the accident immediately but referred all questions to his office.
This morning, the area director for the agency, Mary Hoye, said that the agency does not comment on active investigations and said only that the inspection is to insure that OSHA standards were being followed prior to the accident.
Daley said yesterday morning on Elm Street that the accident would delay the start of work to demolish the Block Building.
“It’s delaying us because we’re not there (City Hall) doing the paperwork we have to do” to issue the demolition contract.
Daley said this morning that, as a result of the collapse, the bank’s contractor will have to suspend stabilization efforts until the bank comes up with a comprehensive plan to stabilize the building while protecting the public in the process.
“We have asked them (the bank) to put together a plan, with an engineer, about how they’re going to stabilize the building” Daley said.
“Jonathan Flagg will approve it to make sure they’re doing it the right way” he said.
In the meantime, Daley said, the contractor will be denied the use of the city’s streets and sidewalks as staging ground of any work.
While the bank is making a plan, Daley said city efforts to remove the Block Building are progressing.
He said that the city’s plan will be submitted to a state agency, the Division of Capital Asset Management, for approval.
Daley explained that the approval is needed to circumvent the usual lengthy procurement process to deal with the emergency without delay.
He said that he hopes that the state approval will be secured today so a contract can be executed and the demolition contractor can begin to stage his equipment before the end of the week.
Daley again declined to identify the contractor before the contract is finalized.