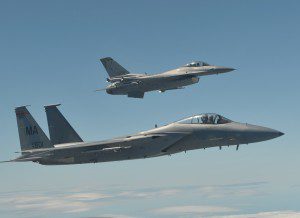 WESTFIELD – Funding is being sought for reconstruction of the main runway (2/20) at Barnes Regional Airport, work that may displace the F-15 fighter jets of the 104th Air National Guard Fighter Wing for the duration of the project.
City Advancement Officer Jeff Daley said this morning that the city is working with the Federal Aviation Administration (FAA) and the Massachusetts Aeronautics Commission, a Division of the state Department of Transportation, to secure the funding needed to remove the existing runway and install a new structure. The estimate of the projects is $21 million, with the city responsible for funding 2 1/2 percent of that total.
“We’re at the early planning stages,” Daley said. “The average life span of these runways is 20 years.  The current runway has been in use of 28 years, so it’s a very important project for the airport.”
Daley said the final engineering work is slated to begin in March, with the actual construction start programmed for July, pending receipt of FAA and state funding.
The runway reconstruction will not close the airport to civilian aircraft traffic.
“There will be no interruption to civilian aircraft operations,” Daley said. “Corporate and private aircraft will be able to use runway 15/30 during the reconstruction.”
“The F-15 needs a longer runway so they will not be able to stay,” Daley said. “The project timeline is for 120 days, so the preliminary plan is to use another airport (Westover Air Reserve Base) for flight operations, but all other Air Guard administrative function will remain at Barnes.”
“The new runway will be a top of the line, first call facility that will attract aircraft to Barnes,” Daley said. “We hope that the new runway and all of the other improvements made at Barnes will attract new tenants.”
Daley said the new runway will have a greater load-bearing capability, allowing a broad range of aircraft to access the airport.
“It will be more stable, so it will take heavier aircraft,” he said.
“The proposed plan is great for both the Guard and the City,” said Maj Matthew T. Mutti, Wing Exec Staff Officer for the 104th Fighter Wing Barnes Air National Guard Base. “We appreciate the support of the community and the state as we work toward making this plan a reality.”