(Editor’s note: With the holiday season more needed than ever after a year that has been challenging to say the least, The Westfield News asked several members of the WhipCity Wordsmiths to share a thoughtful recollection of years past. We hope this series of cherished holiday memories by local writers  will enlighten you and perhaps even remind you of a time from your past that you also treasure.)

Sisters Susan Buffum and Lynnmarie May both treasured the time they worked at Conner’s Office Products, Cards & Gifts – especially during the holiday season.

Buffum is an author/artist living in Westfield who has written 23 novels, 17 anthologies, and seven novellas. Her books can be found at Blue Umbrella Books at 2 Main St., and online on booksellers’ sites and on Amazon and Kindle. She and daughter Kelly Buffum are co-founders of the WhipCity Wordsmiths, Westfield’s writer/author social, support, and networking group which was established in June of 2017. Buffum is also a board member of Artworks of Westfield where she is the literary liaison.

May lives in Westfield and has had work published in literary journals and local papers as well as in many children’s magazines including Cricket, Clubhouse, Ladybug, Babybug, On the Line, and Story Friends. She is currently working on new magazine pieces, picture book texts, and a YA novel. She also writes 10-minute plays. May is a member of many writer’s organizations as well as the WhipCity Wordsmiths.

Buffum and May have written “Christmas at Conner’s on Elm Street” for our readers to enjoy.

“Christmas set up day always meant that the best season of the year was coming,” said Buffum. “There was always such energy in the air in the store at the holidays – and it seemed half of Westfield visited Conner’s for cards and gifts. We all worked together like one big family and still keep in touch to this day.” 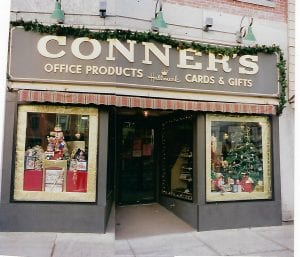 Buffum noted people tell her all of the time how much they miss Conner’s.

“Rosewood is there now, but I still think of Conner’s when I go into that storefront,” she said.

Christmas at Conner’s on Elm Street

My sister and I worked as sales clerks at Conner’s Office Products, Cards & Gifts at 34 Elm Street in downtown Westfield. The business was owned by George Reichert. It was a wonderful place to work year round, but for all of us employed there, Christmas was our favorite holiday.

During a single Sunday, the entire staff worked hard to transform the store into a Christmas wonderland. Prep work began on Saturday with stock being moved or boxed up and stored until the New Year to make room for the holiday items that had been ordered. The colorful backings on all the display areas were changed from Halloween/Thanksgiving orange to dark red. George and the stock boy carried up boxes labeled “Christmas” from the basement and brought down more boxes with the same label, plus hanging Christmas decorations made by Ann Reichert, from the loft area above the front entrance, crowding the aisles with the materials we needed to make the transition to the biggest holiday of the year.

Bright and early on the Sunday after Thanksgiving we all arrived at the store and the work began. George was in charge of decorating, but he also arranged all of the boxed Christmas cards on the shelves near the front of the store. One of us (usually Lynnmarie) would open the cartons of single greeting cards, which included a Hallmark map for how to set them out in the display racks opposite the office products wall. Then she’d start putting out the plastic wrapped packages of cards according to the type, following the map as closely as possible. In the main aisle the other ladies (Alison Reichert, Jane S, Jane R, Maryann, and Susan) were busy opening cartons filled with gifts and arranging them on the display shelves and the tables set up at the front of the store. The stock boy and delivery driver hustled to hang the greens and lighted wreaths. They also removed and broke down all the empty boxes, hauling them out to the dumpster so the ladies could keep working on the displays. There was a pause for lunch and then it was back to work until everything was out on display and the aisles were clear of boxes and set-up debris. The sound of the vacuum cleaner meant our work was nearly completed.

Walking into the store on Monday morning one would have thought the store had been magically transformed by elves. Sales were always brisk once Christmas had been set up, but the best was yet to come during Conner’s annual Holiday Open House and Sale when we dressed up in our holiday best and refreshments were served. We usually had a surprise arranged for the customers. One year it was Lynnmarie’s husband Michael playing holiday music on his acoustic guitar. Another year it was a visit from Santa Claus and his elf. On the table in the alcove normally displaying wedding invitation albums, a holiday tablecloth was spread. George’s famous meatballs were a tradition as was the Christmas punch. There was also a selection of cheese and crackers, usually some cookies, and another sweet treat such as Munchkins. The table was a congregating place for jolly customers.

Every year the ladies worked hard to create beautiful displays in the front window. It wasn’t as easy as it appeared to be from the street. The window areas were crowded and hot from the sun despite the wintery chill outside. There was limited space to work in, however, every year we created amazing, attractive windows that elicited plenty of compliments from our customers.

In 2007 the store closed. As the lights were turned off and the key was turned in the lock for the last time, we walked away carrying with us decades of memories. Some of the best of those memories were of Christmas at Conner’s when it seemed as if the entire city of Westfield passed through the front door to join us in celebrating the season.