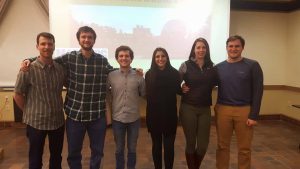 The press conference, organized by student volunteer for the Massachusetts Public Interest Research Group’s (MASSPIRG’s) Nichole Mowad and keynoted by Dr. Brian Conz, focused on the idea that fighting climate change would start with efforts by college campuses. Mowad said the significant energy consumption by colleges combined with an abundance of space to install solar panels and wind turbines makes them the perfect place to start.

MASSPIRG stated that their goal is to have WSU running their entire electrical grid on renewables, like solar power, by 2030, and to have 100 percent of the energy consumption supplied by renewables no later than 2050.

Conz, a professor in the WSU Geography and Regional Planning department, said that we need to change how we convince people to help the cause.

“Practice austerity and live simply,” Conz said. “Those are good lessons, but not a really good sell when you’re trying to win people over to the cause.”

Conz also mentions that WSU has signed on to the Climate Leadership Commitment, a program by the Second Nature organization for colleges to pledge to reduce their emissions and to prove that they have done so.

MASSPIRG has led many political efforts on campus in the past, including the bottle bill ballot measure in 2014 that was rejected by voters, and an ongoing effort to reduce the use of antibiotics in factory farms.

Students in attendance were invited to attend the Peoples Climate March in Washington DC on April 29. The march protests the Trump administration’s rollback of existing climate policies.