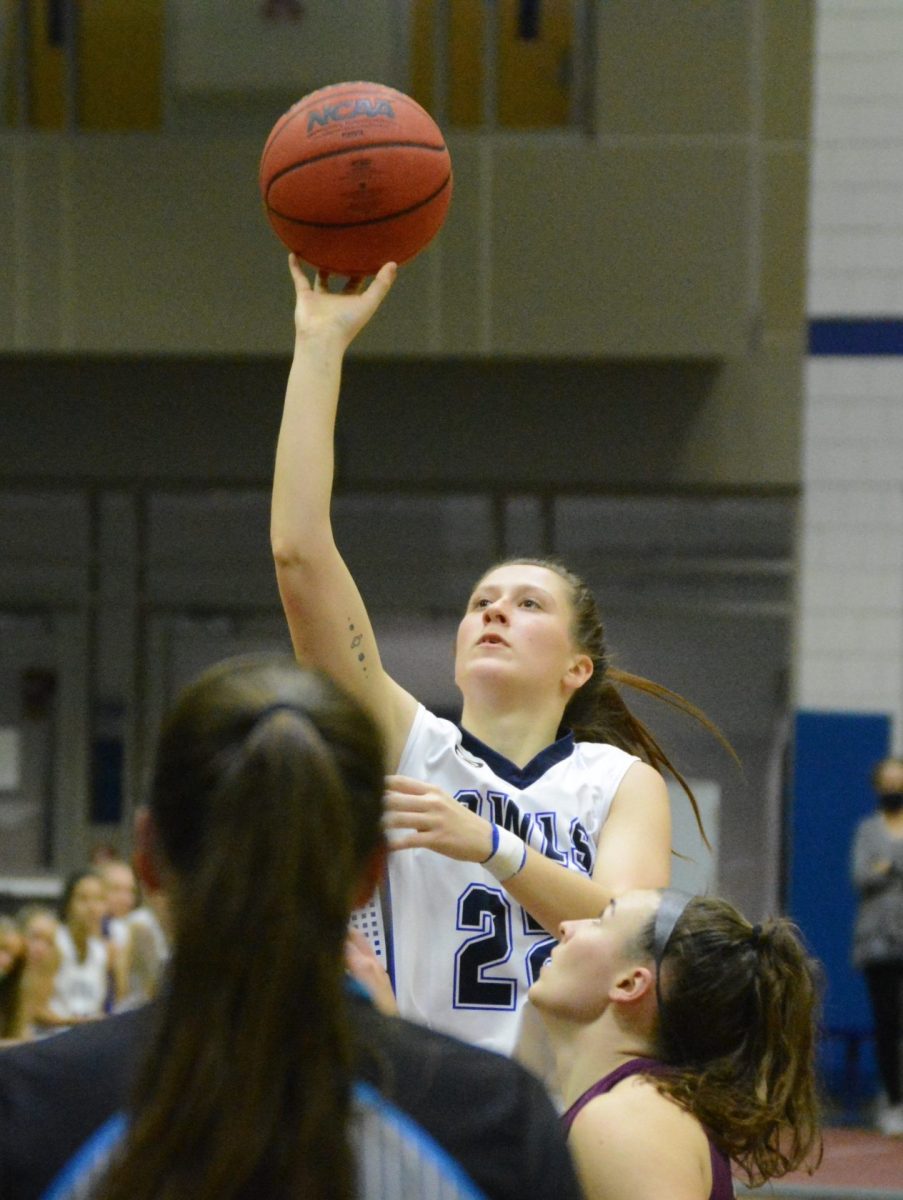 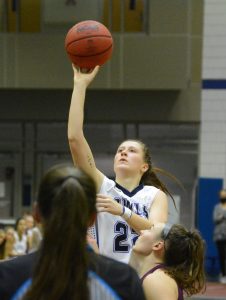 WESTFIELD – The Westfield State University women’s basketball team picked up their second victory of the season in an 84-63 win over Mitchell College (4-3) on a Saturday afternoon from the Woodward Center.
The Owls fell behind by double-digits in the first quarter until the defensive intensity picked up, starting with a pair of steals and lay-ups from senior guard Melissa Gray (Peabody) and first-year point guard Lila Labrie (Southampton) to cut the deficit to four after one quarter.
In quarter number two, the Owls held the Mariners to just eight points by forcing 11 turnovers and holding Mitchell to 17% shooting from the floor to put Westfield up eight heading into the break.
After a closely contested third quarter, the Owls dominated the fourth quarter, beginning with a 14-2 run, to outscore the Mariners 30-14. Gray poured in 10 of her 17 points in frame, which ballooned the lead to 21 points late in the game. She also contributed eight rebounds and five assists for the game. Labrie added 12 points, while senior forward Paris Wilkey (Lynn) was the third Owl player to finish in double-figure scoring with 10. Senior Jenn Rennich (Bedford) disrupted the offensive flow of the Mariners, forcing a team-high six steals. Sophomore Olivia Hadla (Westfield) made 3-of-6 shots from the field, draining two 3-pointers for eight points.
Mitchell forward Amina Wiley (New Rochelle, N.Y.) finished with a game-high 23 points. Junior Dede Stevenson (Hartford, Conn.) compiled 14 points, six assists and five rebounds while burying four of eight triples.
Westfield State feasted off of turnovers as the Owls forced 43 turnovers and doubled the Mariners in points off turnovers (36-18). The Owls also converted frequently on the fast break, out-pacing Mitchell 33-12. Both teams had relatively similar shooting numbers as each team shot 39% from the floor. The Mariners connected on six of 23 threes (26.1%) while the Owls made nine of 39 triples (23.1%).
Westfield State (2-6) will return Tuesday in a road match-up against NESCAC opponent Connecticut College at 7 p.m.

MEN’S HOOPS HOLDS OFF MITCHELL: Westfield State sophomore Kuany Teng (Manchester, N.H./Bradford Christian Acad.) scored 24 points to lead a balanced team effort as the Owls held off Mitchell College, 86-76 in a non-conference game at the Woodward Center on Saturday afternoon.
Teng shot 5-12 from behind the three-point arc and dished out five assists with three steals.
Westfield improves to 7-2 on the season, while Mitchell is now 3-4.
The Owls jumped out to a 37-24 halftime lead behind 14 points from Teng, and Mitchell shot just 9-35 (25.7 pct) from the floor and 0-6 from three in the opening stanza.
The pace of the game accelerated in the second half, and the Mariners trimmed the Westfield lead down to just four points, at 61-57 after a Dontae Pollard (Fort Walton Beach, Fla.) layup with 8:11 left in the game, and then to as few as three at 73-70 when Jalen Benson (New London, Conn.) hit 1 of 2 free throws with 3:24 to play.
But from there the Owls spurted away, using a 9-0 run fueled by a dunk and a putback from Brendon Hamilton (Worcester/Tech)to extend to 82-70 with 55 seconds left.
Hamilton, who ranks in the top 10 in the country in rebounds per game, had another monster game with 21 points, 19 rebounds and three blocked shots, while shooting 8-10 from the floor and 5-7 from the line.
Justin Rennis (Springfield/Central) added 16 points, Jeremy Remigio (Santo Domingo D.R./Providence (RI) Central) had 11, and Joe Meade (Westfield) came off the bench to provide 10 points and 10 rebounds, along with four assists and four blocked shots.
Alfonzo Stokes (Bloomfield, Conn.) finished with 24 points to lead the Mariners. Hunter Baillargeon (Norwich, Conn./St. Bernard) and Pollard each added 14, and Benson had a solid all-around game with 13 points, eight rebounds and six assists.

O’SULLIVAN WINS 3,000 METERS AT SPRINGFIELD INVITATIONAL: Westfield State University senior Amy O’Sullivan (Greenfield) picked up the start of the indoor track and field season right where she left off, winning the 3000 meters at the Springfield College Invitational to highlight the Owls’ performances on the day.
A national qualifier in cross country, O’Sullivan clipped the tape in 10:41.87 today, nearly four seconds ahead of her closest competitor. Teammates Kayla Whitcomb (Hubbardston/Quabbin Reg.), Mia McDonald (Westfield), and Kerin Johnson (Weymouth) all cracked the top 10 in a 21-runner field in the 3000.
Allison Downin (Hudson) took a third-place finish in the 1000 meters in 3:43.70.
The Owls’ Savannah Campbell (Walpole) finished fourth in the 400 meters in 1:06.45.
Westfield will be back on the track next Saturday at the Pioneer Winter Invitational meet at Utica (N.Y.) College.

KACZOR, OWLS FINISH SECOND AT BRIDGEWATER INVITATIONAL: Junior swimmer Wiktoria Kaczor (Belchertown) won two individual events as the Owls placed second in an eight team field at the Bridgewater Invitational on Saturday afternoon. The Owls placed the top two swimmers in both the 100 and 200-yard breaststrokes as Kaczor won both events (1:12.78 and 2:39.67) while first-year Karoline Warzybok (Chicopee) was the runner-up in each.
First-year Alexa Richter (Westfield) won the 50-yard freestyle, placing with a time of 26.29. She also was a second-place finisher in both the 100-yard backstroke (1:04.35), where she fell short of first place by only .27 seconds, and 500-yard freestyle (5:38.75).
Junior Kat Ferri (Springfield) was victorious in the 100-yard butterfly by finishing with a time of 1:07.12. She also placed within the top three at the 400-yard IM at a mark of 5:22.76. Kaczor earned second in the same event.
Richter, Kaczor, Ferri, and Warzybok also had success in the 200-yard medley relay and the 200-yard freestyle relay. The Owls won the medley relay with a combined time of 1:58.69 and placed second overall in the freestyle relay, narrowly missing first place by .12 seconds.
The Owls scored 330 points overall, 57 points ahead of third-place finishers Rhode Island College. Bridgewater State won the meet with a score of 507.
Westfield State will have one more meet before the winter break as they travel to Plymouth State on Sat., Dec. 11 at noon.

HOCKEY TIES DARTMOUTH: The Westfield State ice hockey team tied UMass Dartmouth, 3-3, in a MASCAC clash from Hetland Arena in New Bedford on Saturday afternoon.
After a scoreless first period, the Owls found the back of the net three times in a span of five minutes. Senior captain John-Michael DiGregorio (Montreal, Quebec) scored his third goal of the season to open the scoring. 48 seconds later, junior forward Joseph Carbone (Marshfield) extended the lead to two goals with his third of the year. UMass Dartmouth would be quick to answer, however, as graduate student Melker Kroon (Hawthorne) cut the deficit in half 45 seconds later. The scoring barrage would continue late into the period as senior forward Jake Ratcliffe (Auckland, New Zealand) would bury his fifth of the season with 1:14 remaining in the period to put the Owls back up two goals.
In the third period, the Corsairs fought back as junior Michael Perrone (Mt. Sinai, N.Y.) would deposit a goal just two minutes after the intermission. The Owls would hold the lead late into the game, until graduate student Dillon Radin (Long Beach, N.Y.) would tally the equalizer with his team-leading ninth goal of the season on the power play with 2:07 left in the game. Both teams were held scoreless in both overtime periods to split the game at three apiece.
Owls senior forward Paul Frys (Portland, Ore.) would add two assists, while Ratcliffe, Wyatt Lawrence (Sexsmith, Alberta), Mathieu Jones (Gatineau, Quebec), and Andrew McCormick (Canton, N.Y.) all recorded an assist.
Sophomore goalie Kevin Chandler (Hanover) compiled 22 saves for the Owls as Dartmouth net-minder Daniel Davidson (Surrey, B.C.) stopped 29 shots on net.
A total of 117 shots were taken during the game (57 on net) as the Owls put 32 shots on net to the Corsairs 25. Dartmouth held a slight edge in the face-off circle by winning 33 of 62 draws.
Westfield State will play two more games before the holiday break as the Owls host Stonehill College on Tuesday at 7:35 P.M. followed by Assumption College on Thursday at 7:35 P.M. Both games will be played at Amelia Park Ice Arena. – Courtesy of Westfield State University Sports