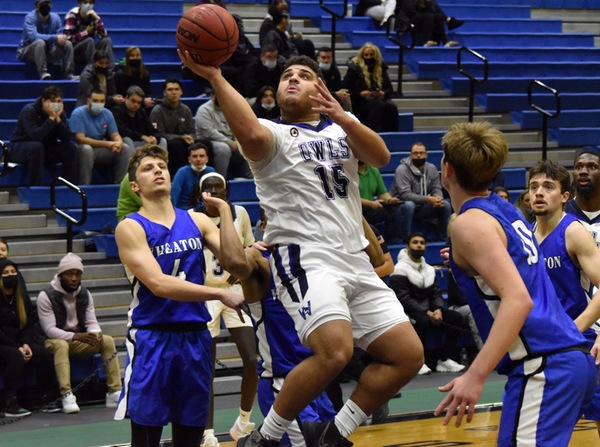 WESTFIELD – Westfield State outscored the visiting Wheaton Lyons 54-38 in the second half on their way to a 91-73 victory at the Woodward Center on Thursday.
The Owls improved to 8-2 on the season. Wheaton dropped to 5-6.
Brendon Hamilton (Worcester/ Worcester Technical) led the way for Westfield with another double-double, pulling down 13 rebounds and tallying a team-high 22 points. The Owls dominated the paint behind Hamilton and Joseph Meade (Westfield) who added nine boards in the win.
Westfield led for the entirety of the first half with the high water mark coming halfway through the frame on a Justin Rennis (Springfield/ Sabis) 3-pointer that pushed the advantage to 13. Rennis finished with 18 points and blocked three shots. 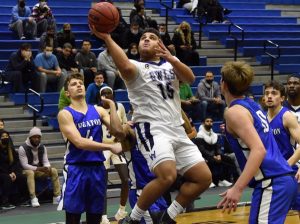 The Lyons clawed back into the game when Lima Marckenley (Roslindale, Mass./ Xaverian Brothers) heated up behind the arc. Marckenley nailed four 3-pointers in the first half to bring the visitors within two at the break, 37-35. Marckenley finished with a game-high 26 points and was 6-11 from downtown.
Both teams traded baskets for the first five minutes of the second half before an Alex Carlisle (Saint Johnsbury, Vt.) three pointer gave the Lyons their first and only lead of the night (49-48) with under 15 minutes to play. The Owls responded a minute later with a JT Thompson (Columbia S.C./ Dutch Fork) jumper assisted by Hamilton and never looked back, outscoring the Lyons 43-24 from that point on.
Westfield point guard, Jeremy Remigio (Santo Domingo, DR/ Central High School) was 6-9 from the field for 13 points and connected on eight assists. Kuany Teng (Manchester, N.H./ Bradford Christian Academy) was the only other Owl to score in double figures with 10, he also grabbed seven rebounds.
Carlisle finished the night with 16 points. Ty Murphy (Dedham, Mass./ Xaverian) added 13 off the bench in the setback and Evan Cook (Dunstable/ Groton-Dunstable) secured a team-high nine rebounds and four assists for Wheaton.
The Owls finished with a 48-20 advantage in points in the paint and were 22-28 from the charity stripe.
Westfield State heads to New York City this weekend for the CUNY York tournament. They open with Keystone College on Fri., Dec. 10 at 5 p.m. This was Wheaton’s last game of the fall semester wrapping up their non-conference slate. The Lyons open their NEWMAC schedule in the new year on Wed., Jan. 5 against Coast Guard.

COLLINS LIGHTS LAMP TWICE AS OWLS GROUND SKYHAWKS: Westfield State’s Justin Collins (Wilmington) scored two goals and assisted on a third to power Westfield State to a 4-1, non-conference men’s ice hockey win at Amelia Park Arena on Tuesday night.
Westfield improved to 5-4-2 on the season, while Stonehill fell to 4-7-1.
The Skyhawks got on the board first with the lone goal of the opening period as Mike Seoane (Norwell) tipped Teddy McElany’s (Walpole) shot from the point past Westfield State goaltender Valtteri Valtonen (Helsinki, Finland) on the power play. 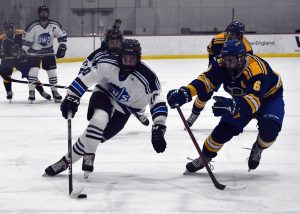 But from there, the Owls stayed out of the penalty box for the rest of the night, and Valtonen made all the plays in finishing with 37 saves on the evening.
Collins tied the game just 56 seconds into the second period on the power play, as Jason Diamond (Lakeville, Conn.) and Mattheiu Jones (Gatineau, Quebec) did the dirty work in front of the net before slipping the puck out to Collins, who one-timed a shot from the right face off spot.
Collins added his second goal of the night in transition, as Peter Izzo (Oakville, Ont.) sent the puck ahead to Matt Pelletier (Westfield), who dropped a pass for Collins, who again fired from the right faceoff circle for the goal and a 2-1 lead with 15:59 left in the second period.
Collins fed Chuck Costello (Philadelphia, Pa.) cutting to the net later in the period for a 3-1 lead. Cory Morris added a late empty netter for the 4-1 final. Diamond finished with a pair of assists for Westfield.
Chase McKay (New Port Richey, Fla.) took the loss in net for the Skyhawks, making 35 saves in 58:54 between the pipes.

CONN COLLEGE RALLIES PAST WESTFIELD STATE: Westfield State led 51-43 heading into the fourth quarter, but the Owls couldn’t shut the door on Connecticut College as the Camels pulled out a 66-60 win in a non-conference women’s basketball game in New London, Conn. on Tuesday evening.
The Owls were outscored 23-9 in the final frame as Westfield shot just 3-19 from the floor and 1-10 from three-point range in the final 10 minutes.
The Camels netted the first nine points of the fourth quarter, taking a 52-51 lead on a free throw from Audrey Shaev with 6:39 left in the game, then took the lead for good on a layup from Emily Tripp a minute later.
The Owls were led by 25 points from Melissa Gray, who moved into fourth place on the Owls all-time scoring chart with 1,485 points, passing Jill Valley ’17 (1475). Gray is now 10 points away from matching Ellen Carey ’92 in third place and 41 away from the school’s career mark.
Olivia Hadla (Westfield) was the only other Owl in double figures in scoring with 10 points. She also tied for a team-high in rebounds (6).
Conn College was led by 14 points from Molly Cronin and 10 from Rebecca Oberman-Levine.
Westfield State will play one more game before the holiday break, hosting Western New England College on Saturday at the Woodward Center. – Courtesy of Westfield State University Sports