The Schools Department received the grant, called the Massachusetts Skills Capital Grant, through the Workforce Skills Cabinet, according to Westfield Schools Superintendent Stefan Czaporowski. The money will go toward working on the interior portion of hangar two located at Barnes Regional Airport, which is used for the Aviation Maintenance Technology program at WTA.

“It was a lot of hard work on the side of the school department and grant writing to apply for this money,” Westfield Mayor Brian Sullivan said.

“A lot of kudos to the superintendent and his staff,” he added.

The city also received this particular grant last year, according to Sullivan.

The hangar is used by students to house airplanes and related technology but work has to be done outside by the students currently, according to Czaporowski.

With the interior being renovated though, students will be able to work inside once finished.

“We want it to be able to be used year-round,” Czaporowski said of the hangar.

Czaporowski said that the grant money will go toward a number of interior components, which will make the hangar more hospitable.

“We’re going to do the sprinkler system and heating system, probably some of the plumbing and electrical work,” he said. 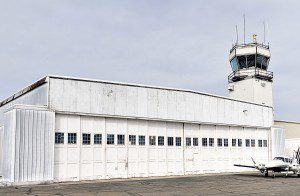 According to Czaporowski, the grant process was competitive, with 66 applicants pursuing the grants.

Work began toward the end of 2014 on the exterior and finished in April 2016.