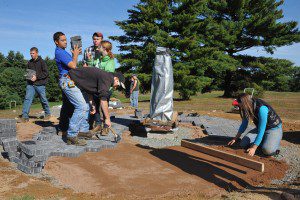 WESTFIELD – To commemorate the five year anniversary of the dedication of the Danell-Stevens Memorial monument, East Mountain Country Club will be hosting a Wreath Laying Ceremony at the monument site on Saturday October 14, 2017 at 1 PM.

Members of the pilot’s families and members of the Westfield American Legion Post 124 will be participating in the ceremony.  The ceremony is free and open to the public and transportation to the monument site on the golf course will be provided for the elderly and disabled.

“It is hard to believe it has already been five years since the dedication,” said East Mountain Country Club co-owner Mark Perez.  “We are planning a simple ceremony of remembrance with a 21 gun salute, the playing of taps and a wreath laying by members of the pilot’s families.”

The Danell-Stevens Memorial monument was dedicated on October 20, 2012.  It was built in tribute to Lieutenant Robert H. Danell and Captain Fred H. Stevens, two US Air Force pilots who lost their lives in the skies above what is today the East Mountain Country Club in Westfield.

On October 19, 1952, Lieutenant Danell and Captain Stevens were flying with a team of four F-86 Sabre jets from Westover Air Force Base at an Air Show at Barnes Municipal Airport in Westfield.  Near the end of the show, Lieutenant Danell and Captain Stevens were involved in a mid-air collision, killing both pilots instantly.  Over 5000 spectators were on hand for the Air Show at Barnes that day.