HUNTINGTON – The Gateway Regional School Committee met Wednesday for a regular meeting that was not one of the joint budget meetings with the member towns, although some town representatives were in attendance, with the impact of the increasing dialogue and collaboration apparent throughout the discussion.
Gateway Superintendent Dr. David B. Hopson spoke about the revised strategic improvement plan for the district, which he said was simpler than the first version and easier to follow. The plan reflects the challenges of how to provide an exemplary education with decreasing enrollment and financial constraints within the state and member towns. 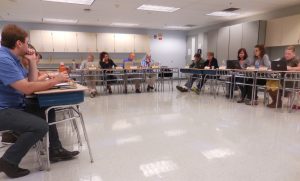 The Gateway Regional School Committee met on Wednesday in Huntington.

Among the obstacles listed are declining student enrollment, the aging of towns’ populations, the need for the district to have parity with salaries/benefits, decreased economic activities in towns, home schooled (including a large Mennonite population in the district), school choice, and charter schools garnering students.
Competencies cited in the plan include the central location, updated facilities, great staff/student ratio, student opportunities to participate in athletics and other activities, students known by staff, business functions rated highly, high cost efficiencies, and highly rated in-school safety.
One of the recommended actions is to hire a consulting firm to review district operations and to use the information for cost effective district sustainability. Collaboration with other districts, the towns, and regional organizations to support the sustainability of small districts is also in the plan.
The potential for towns to regionalize their own services thus decreasing costs and for revenue growth with the help of Community Compact funding are noted as positives, as is the potential for increased state funding through the Rural School Initiative and sharing educational services with other school districts, all currently being studied by the district and the towns.
Ultimately, the district seeks to increase school choice students coming in and entice home-school students back by increasing online class offerings, and promoting  its low class sizes, 1 to 1 technology, great facilities and staff.
More evidence at the meeting of the increasing dialogue with member towns was reflected in a request from the towns to attend School Committee executive sessions on union negotiations which are set to begin for a new three year contract. Hopson clarified the request, saying they wouldn’t attend the negotiations themselves, but executive sessions that discuss them. He said there is one town representative, Dan Jacques of Montgomery, who is a part of the negotiating team.
Huntington member Ron Damon said he would want to see a limit on how many townspeople attend the executive sessions, and also have the same representatives attend all the sessions. Aaron Welch of Huntington said he would support having each town send one representative.
Lyndsey Papillon of Russell recommended sending a formal invitation to the towns to appoint someone as the representative. Huntington selectman Darlene McVeigh also recommended explaining in the invitation that whoever comes to the executive sessions, must not discuss them. School Committee chair Michele Crane of Russell said they could go back to their towns and hold an executive session, where they could discuss in broad terms the executive sessions of the School Committee.
Melissa Nazzaro said the goal would be to have the towns see the process and the steps that are taken. She said transparency is easier if you’ve seen all the steps.
Hopson said only the first date for union negotiations has been set, but he hopes to have more meeting dates in the near future. Damon and Welch both expressed interest in participating in the negotiations.
Welch also reported on a Massachusetts Association of School Committees (MASC) luncheon which he had attended. He said they spoke about trends and challenges facing schools over the next ten years. Welch, who is new to the School Committee this year, said it made him more excited to attend the MASC conference in November.
Hopson said a new state requirement has come out on records retention, which he said has staff concerned. “It looks like we will have to figure out a way to archive voice mail, social media and all websites,” he said, adding that he was especially concerned about the challenge in archiving social media. He gave the example of Twitter, where not only the tweets would need to be archived, but also all the metadata.
“We have to sit down and figure out which social media to use,” Hopson said. He also said there is a problem with outside teacher websites, which were previously allowed by the district, and which he said would cost $400 a month to archive. “I’m not sure we can keep them,” he said, noting that some teachers had developed very good websites.
Sarah Foley of Middlefield suggested looking at how other districts are complying, and Hopson said he was going to speak with Westfield, which is using one of the recommended programs. Foley also asked if this was another state mandate. Nazzaro said that some of the requirements were changed in January, which she called “small little tweaks in the law” that have created overwhelming tasks for cities and towns.