WESTFIELD—Residents were given information and advice from experts and others during a panel discussion related to the city’s water yesterday.

What was billed as a fundamental, basic understanding, of the issues facing what some are concerned about Westfield’s water supply ended up being a more intensive chemical and science discussion.

Westfield Residents Advocating For Themselves (WRAFT) held a PFAS Panel Discussion at North Middle School on Southampton Road Wednesday evening to provide residents with additional information regarding polyfluoroalkyl substances (PFAS) that were previously found to be in two city water wells. The panel included researchers discussing potential impacts of PFAS on humans, as well as information on what the community can do from members of Testing for Pease, a community action group who grappled with PFAS contamination in their community. 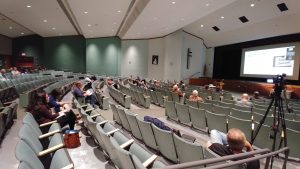 The crowd at the PFAS Panel Discussion at North Middle School Wednesday evening.

“The issue Westfield faces is not unique to Westfield,” Ward One City Councilor and opening speaker at the event, said. “We know that more needs to be done to protect the future quality and quantity of our drinking water.”

Those who spoke included Dr. Laurel Schaider, a research scientist for Silent Spring Institute, a researcher-led group “dedicated to science that serves the public interest,” according to their webpage, and focuses on environment and women’s health among their agenda, and who also leads Silent Spring’s Cape Cod water quality research.

Also, Dr. Courtney Carignan, who is an environmental exposure scientist, epidemiologist and assistant professor in Food Science and Human Nutrition, Pharmacology and Toxicology at Michigan State University, according to her biography for the event. Her research includes looking into human exposure to chemicals such as PFAS, and their impacts.

Then, WRAFT also had Alayna Davis speak. Davis is a member of Testing for Pease, a community action group that works to educate and advocate for Pease residents, where certain PFAS levels in certain water wells were also found. The group also worked with politicians and others to successfully get blood testing approved for the chemicals for residents.

According to Schaider, who provided background information of PFAS, there are over 3,000 PFAS on the international market. She said that they are very diverse and hold properties such as water and oil resistance, which makes them useful for different purposes.

They can be found in a number of household products, including carpeting, upholstery, waterproof apparel, nonstick cookware, as well as in fast food packaging, Schaider noted.

They are also found in aqueous firefighting foam (AFFF), which was previously used on Barnes Air Reserve Base and other bases for training and fire suppression purposes, as well as in some wastewater and from production facilities, according to slides presented by Schaider.

Production of two PFAS’ known as PFOS and PFOA used to occur in the US, according to Schaider, and these were what was found previously in high levels in two of Westfield’s wells. However, she said that production of these two compounds was phased out of the US and “production shifted to China.”

“That seems better,” she said. However, “it doesn’t mean the chemicals are breaking down.”

Carignan, who spoke of the potential health impacts related to PFAS, said that “most of what I’m going to talk about on health data is PFOA,” during her portion.

She noted that the potential health impacts of these substances include possible endocrine system issues, as well as thyroid issues and possible immune system impacts related to vaccines.

Other potential impacts listed by Carignan included cholesterol levels and potential neurodevelopment impacts. In addition, she noted that PFOS and PFOA are considered possible carcinogens.

Carignan suggested that residents who are concerned should talk with their physicians, as well as provide them with additional information on potential health issues related to PFAS.

Davis, who was from Testing for Pease, spoke about her group’s involvement in the process and how community members can work together to advocate. She also highlighted how the community was able to get blood testing for residents.

Davis said that contamination was discovered in May 2013 at the former Pease Air Force Base, where AFFF was reportedly used. The location was closed in 1991 but became the “Pease International Tradeport” after that closure, she said. She also noted over 250 businesses and nearly 10,000 people worked daily at the Tradeport.

Three wells were shut down at the location due to PFAS contamination.

Davis said that the New Hampshire Department of Health and Human Services (DHHS) became involved early in the issue, but did not recommend blood testing for the community.

Davis said that Andrea Amico, also of Testing for Pease, worked on contacting the DHHS, then when that stopped she continued to work, creating a petition, contacting the local newspaper and talking with politicians, among other avenues.

In June 2015, the first round of testing was done, Davis said. Testing found that Pease residents had elevated levels of PFAS compared to the general population, Davis noted.

Following this, Davis noted that federal involvement also occurred, which led to two health studies being proposed for Pease.

Davis noted that residents who are concerned should work to communicate and advocate. In addition, researching the information is key.

“You need to become your own expert in a way,” she said.

Also, she noted to connect with experts and politicians, form community groups like WRAFT and provide information to doctors.

According to Kristen Mello, WRAFT member, the discussion was meant to provide information WRAFT members found helpful for residents that her and other members received at a conference in Northeastern University in June.

She thanked the presenters, adding that no speaker fees were paid.

“They did this out of their own generosity and care of the families,” she said.