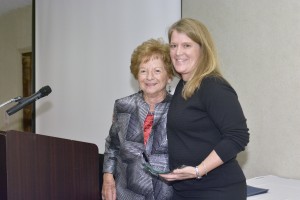 Bill Cloutier and Catherine Aborjaily were awarded the YMCA Spirit Award.  The YMCA Spirit Award is bestowed upon those individual who have an outstanding dedication to the Y and are cause driven leaders. The Y’s CAUSE-DRIVEN LEADERSHIP approach is the practice of leading in a manner that advances the club’s cause to strengthen communities through their work in youth development, healthy living, and social responsibility. 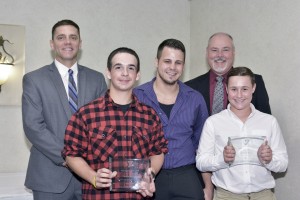 The Program Volunteer Award went to Tom Lane and his dedication and commitment to the YMCA Masters Swim Team.   Justin Haluch and Andrew Dion were honored with the Youth of Year Award for exhibiting outstanding character and reflecting the values of the YMCA.  The Volunteer of the Year was awarded to Debbie McCarthy for outstanding dedication to the YMCA.  Specifically her role as the Facilities Committee Chair and spearheading numerous  projects at facilities on Court Street and at Camp Shepard.

Also recognized were  6 individuals who served the YMCA for a combined total of 70 years. 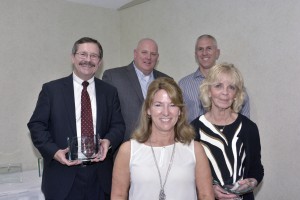 Each is being presented the YMCA Mission Award for their generous commitment of time, support and inspiration as a member of the YMCA Board of Directors.They have truly been incredible stewards of the resources that have been entrusted to them and the YMCA of Greater Westfield is a better organization today because they chose to serve.  They are Chris Carey, Eric Hall, John Shaver, Karen Webb, Brian Scanlon and Lisa Sullivan.

Lisa Sullivan is currently the  Vice-President and will be serving as president next year.   With a special vote by the Board of Directors her “off-year” has been deferred to 2020 so she can fulfill her duties as president without interruption.