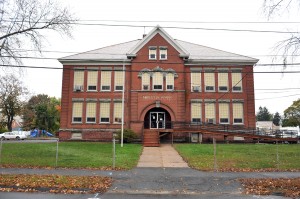 City officials have announced there will be a public hearing on the Ashley Street school on Nov. 16. (Photo by chief photographer Frederick Gore)

WESTFIELD – The city has initiated the permitting process for the new Ashley Street school with a petition to the Zoning Board of Appeals.
The ZBA has slated a Nov. 16 public hearing for dimensional special permits needed for the school project. The hearing will be conducted in the City Council chambers.
Wednesday night, the ZBA members accepted the application for dimensional special permits, needed on the west side of the proposed 96,000-square-foot school, where the city’s land abuts that of St. Peter/St. Casimir Parish.
City zoning requirements for a Residence B zone, in which the school would be constructed, mandate a side-yard set back of no less than 15 feet.
A corner of the school’s southern wing is within eight feet of the church property, while the middle wing is within 12 feet of the church parking lot.
The frontage setback along Ashley Street (the south face of the building) and the side yard setback along Cross Street (the east side of the school) are both in compliance with the zoning requirements. The north face of the building fronts the Cross Street playground.
The ZBA permit is the first of several that will be required as the school building project moves forward. Several of the permits, such as Planning Board’s site plan review, typically require public hearings at which residents can present concerns related to the project and the site.
Mayor Daniel M. Knapik said Thursday that the city will submit a site plan after the ZBA process is completed.
“We have to have the permits in place” to move the project forward,” Knapik said. “After the ZBA process, a site plan will be submitted to the Planning Board. It’s a pre-existing use of that property, so it may not need a special permit.”
Knapik said that the project is in the process of review by several city departments and commissions, including the Board of Public Works, which will have to approve curb cuts for the bus holding lane along Cross Street and the drop-off lane along Ashley street.
The Water Commission, Traffic Commission, as well as the police and fire departments, are reviewing technical aspects of the project.
Knapik said that the water main under Ashley Street has adequate flow to service the new building, but a larger water line will have to be installed.