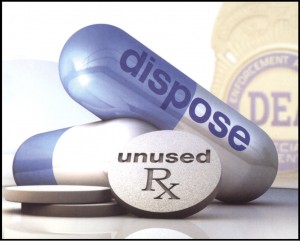 City police will be on hand at their 15 Washington Street station on Saturday, from 10 a.m. until 2 p.m., to collect – with no questions asked – any unused or expired prescription medications, as they participate in a nationwide initiative, coordinated by the federal Drug Enforcement Administration, to combat abuse of prescription drugs.

WESTFIELD – Local residents who have leftover, expired or unwanted medications will have another opportunity to safely and responsibly dispose of those drugs on Saturday, Oct. 29, at the city’s police station at 15 Washington Street from 10 a.m. until 2 p.m.
The collection Saturday is part of “Got drugs?”, a nation-wide effort by the federal Drug Enforcement Administration to prevent the misuse of prescription medications, which has removed hundreds of tons of medication from circulation across the country in previous collections.
In Westfield, the collection will be handled by police detectives and Det. Brian Fanion, the department’s property officer, said that the collection opportunity will be offered because of the response to a similar collection earlier this year, in April.
His supervisor, Det. Lt. David Ragazzini said “The last one was a tremendous success and we took in more than a hundred pounds of pills.” He said that any unused or expired prescription medications will be accepted – with no questions asked – but said that drugs which will not be accepted are liquids, aerosols, transdermal patches and sharps.
Non-prescription medications will also be accepted, Fanion said. “We can take over-the-counter stuff if they’re expired or if people just want to get rid of them to keep them out of the water supply” he said.
Both local police and DEA spokespersons agree that misuse of prescription drugs is a huge problem and support the effort to get unneeded medication out of circulation.
A DEA statement reports that a 2009 national survey showed that “more Americans currently abuse prescription drugs than the number of those using cocaine, hallucinogens and heroin combined.” The report also states that “teens who abuse prescription drugs often obtain them from family and friends, including from the home medicine cabinet.”
Local legislators also endorse the program. In a press release, state Sen. Mike Knapik, R-Westfield, state Rep. Don Humason, R-Westfield, and state Rep. Nick Boldyga, R-Southwick, lauded the program and pointed out that “Prescription drug abuse is a growing problem, particularly among teenagers and young adults.”
Humason said “There is a high street demand for some of the popular prescription medications out there, such as painkillers, anti-anxiety medication, or sleeping aids” and urged residents to take advantage of the opportunity dispose of them properly.
Boldyga pointed out the possible health risk of improper disposal of medication. “Flushing medications down the toilet has the potential for releasing chemicals into local water supplies.”
Local health officials have said previously that discarding drugs as trash may allow the drugs to leach into ground water from landfills.
Michael Suckau, the city’s director of public health, said in April that pharmaceuticals, both prescription and over-the-counter products, are becoming recognized as emerging contaminates to public water supplies. He said that thus far only trace amounts of drugs have been found but the drug collections are important to prevent the problem from becoming acute.
The collection in Westfield will be inside a vehicle bay on the south side of the station from 10 a.m. until 2 p.m. Other collection sites in the area include the Southwick Town Hall and the Huntington transfer station.
Ragazzini said “If you don’t need ‘em and you have ‘em, it’s a great opportunity to get rid of them.”