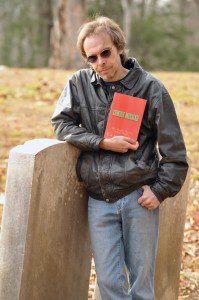 Eric Mead, of Westfield, stands near an unknown gravestone with his new book “Zombie Messiah” which is available through retailers like Amazon and Barnes and Noble. Mead debuted his first book “Coffins and Cocoons” in the summer of 2012. (Photo by chief photographer Frederick Gore)

WESTFIELD – Westfield native Eric Mead has written his second novella, “Zombie Messiah,” which is now available for Kindle.
Mead said the short story, which can also be ordered in book form, is set in Westfield. His first novella, “Coffins and Cocoons,” was also set in his hometown.
“I like this place,” Mead said of his selection of Westfield as a backdrop. “There are a lot of historic places here.”
While Westfield is not named specifically in the story, “Zombie Messiah” includes references to Westfield landmarks and is set in the New England Confederation at the end of this century after the zombie apocalypse.
Mead said he is a fan of zombies – movies, books, anything related to the zombie genre.
“I love zombies,” he said.
Zombies are very popular right now with the success of movies such as the “28 Days” franchise and the television series “The Walking Dead”, which Mead called “brilliant.”
Mead said his zombies are a bit more traditional than those depicted in contemporary fiction, and they’re a lot more scary.
“I am faithful to the old-school George Romero zombies,” Mead said, referring to the director of the original 1968 “Night of the Living Dead” movie.
Mead’s wife helped him craft his zombies.
“My wife started talking about the things she didn’t like about zombies and how they’re not that scary,” said Mead. “Mine are scary.”
Mead said his wife approved of his zombies and even Mead’s children, ages 15 and 18, agreed they were scary.
“My 15 year-old says it makes other zombies scarier,” he said.
Mead’s zombies include an unusual heroine in the character Grandma, an ex-Marine who leads the charge against the zombies in Westfield.
“My wife says my book is a feminist zombie story,” said Mead, whose first novella also has strong female characters.
Mead, 44, was a photojournalist for 18 years before retiring from the field to pursue his writing.
“I have always loved to write,” he said. “I am fortunate to be in a place in my life that I can do this.”
Because Mead does count his blessings to be able to do what he loves for a living now, he is giving back by donating a portion of the proceeds of “Zombie Messiah” to The Wayne Foundation.
The Wayne Foundation was co-founded by writer/actor Kevin Smith (“Clerks”) with the mission to provide young women who have fallen victim to commercial sexual exploitation and domestic trafficking with a means of leaving the sex industry for good.
Mead said he chose that charity because most charitable organizations are very large, and he wanted to have a bigger impact.
“I wanted to give to a charity I thought I could really help,” he said.
“Zombie Messiah” is available both for Kindle and in print through Amazon.com and through booksellers such as Barnes and Noble.