EAST LONGMEADOW – An amazing run by one local youth football team has come to an end.
The Westfield Junior Bombers trampled the competition by ground and air for one incredible regular season run, capturing a divisional championship along the way, and representing the Whip City in the SAFL Super Bowl.
Westfield held off the Springfield Youth Football Tigers for as long as possible in the Super Bowl at East Longmeadow High School, yielding just one touchdown in an 8-0 loss.
The Westfield Junior Bombers took the field with force.
Schabowski, Rodriguez, Cimini and Scott stood ready to rumble in the backfield, with Avalle, Leclair and Adamite providing relief. 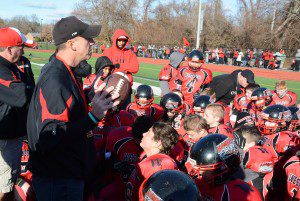 The offensive line fought off blitzing defenders throughout the day.
Daly, Lamountain, Ochoa, Bates and Gardner battled over the line of scrimmage with Carey, Fernandez, and Shink stepping up to assist on plays.
The first offensive series ended with a punt by Dixon that was recovered off the back of a Springfield Youth Football Tigers’ back by Gardner, giving the Bombers another first down.
Schabowski took to the air with several pass attempts throughout the first half to Mike and Matt Collins. Sturmer and Dixon were defended by the toughest Mother Nature had to offer with her gusts of wind taking the ball far off target. The offense advanced down field and fought for every yard, just coming up short of time put it in the end zone.
The defensive front of Bates, Ochoa, Carey, Ward, and Fernandez gave the SYF offense a run for their money. The defensive backfield held their own throughout the game with Cimini and Scott at cornerbacks; Rodriguez, Avalle, Matuszczak, and Lambert rotating at linebacker; and, Adamites and Sturmer making several key tackles deep in the secondary, preventing the Tigers from getting key first downs on several plays.
SYF received the opening kickoff of the second half around the 40-yard line. As the Tigers advanced the ball to midfield, the Bombers’ defensive line closed in, causing a fumble deep in the backfield.
The broken play allowed for the unseen running back to escape and evade a towering defensive line, scrambling out along the sideline into the end zone for a touchdown. A two-point conversion gave the Tigers an 8-0 advantage.
Westfield failed to go quietly into the night.
The Junior Bombers continued to battle up and down the field, play after play, cheered on by Bombers’ Nation. However, Mather Nature’s wind gusts acted as the 12th man, thwarting any attempt of a successful air strike.

The Junior Bombers drop back for a pass against the Springfield Tigers in the SAFL Super Bowl Saturday at East Longmeadow High School. (Photo by Lynn F. Boscher)

“Although these Junior Bombers were not successful in their first arrival to the SAFL Super Bowl they are winners in the hearts and minds of all of (Bombers’ Nation),” Westfield head coach Mike Durkee said. “We would like to thank each and every one who attended our games this season.”
The Junior Bombers Varsity team finished the regular season 7-1, posted a 2-1 playoff record, and recorded seven shutouts, which was unmatched by any other team in the NFC Division.
“(The) support (our team received) helped encourage these players to grow and make great strides as young men and more importantly as a team,” coach Durkee said.
Westfield rode the wave of its cheering section in a quarterfinals overtime victory, an avenging its only loss of the regular season by defeating the same team to be crowned SAFL NFC Divisional champs.
“Having the chance to advance to the SAFL Super Bowl with the greatest group of fans, and wonderful cheerleaders was second to none,” Durkee said. “It will sure be the fuel to the fire to get back to the championship game with a winning outcome. Thank you to all those who helped make this a journey great and never to be forgotten.” – Courtesy of Westfield Youth Football