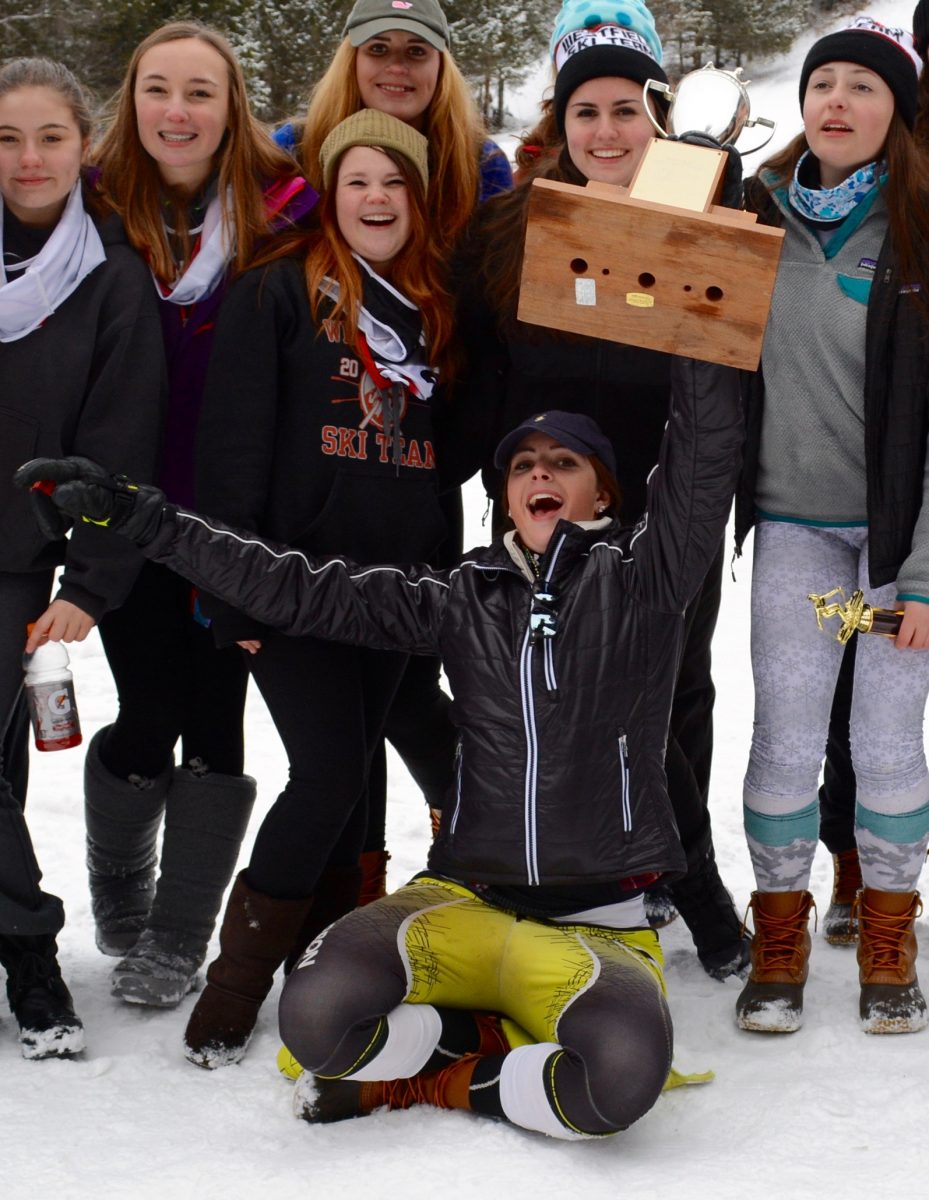 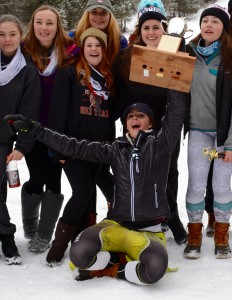 CHARLEMONT – It was a slippery slope for skiers attempting to navigate the course at Tuesday’s Pioneer Valley Interscholastic Athletic Conference individual championships at Berkshire East.
That did not pose a challenge to two local high school teams – the St. Mary Saints and Westfield Bombers – who proved to be a model of consistency, not only throughout the regular season, but also when the stakes were higher.
“It was a banner season for our girls,” Westfield High School ski coach Monique Piotte said of her undefeated girls’ ski team, which also produced an individual silver and bronze medalist at the championships. “We have a lot of depth, a great core, and some phenomenal leaders. It all fell right into place.”
All season long, Westfield skiers Grace O’Connor and Rebecca Stephens jockeyed for the top three spots, often trading places from week-to-week. The “friendly” race between the two teammates was so close that they were tied heading into Tuesday’s competition.
“We work really well together,” said Grace O’Connor, who placed third overall (59.26 combined time) in the PVIAC championships. “We are good friends, and we love skiing together.”
The two skiers, who were named co-MVPs for their team a year ago (a sign of what was to come in 2016), have formed a bond with additional time spent racing Tri-State races.
“When one of us falls, the others all step up,” said Stephens. Stephens was the overall female runner-up Tuesday, finishing with a combined time of 59.18.
Agawam’s Jillian Scherpa won the overall individual championship in 56.62.
The two skiers and the rest of the Bombers’ hopefuls will make one more run at a team title when they travel to Wachusett Mountain for the state championships.
Said Stephens: “We’re going to have fun, and ski fast. States is the end of the road.” 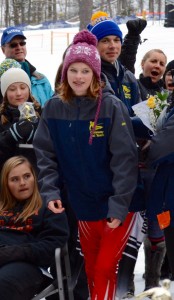 Gateway’s Jessica Garriepy emerges from a crowd of skiers during Tuesday’s awards ceremony to accept her award at the Pioneer Valley Interscholastic Athletic Conference individual championships. (Photo by Chris Putz) 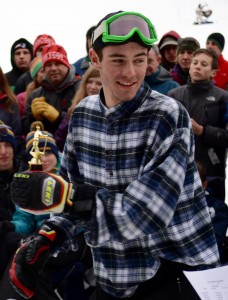 For the Saints, it was their second straight regular season championship. What is even more impressive is that the program has only been in existence for two years.
“We don’t have the depth of a Longmeadow or Mohawk,” St. Mary ski coach Andy Lussier said. “Our core group of boys have the fundamental skills of good racers. They’re good athletes too. That comes into play.”
Lussier has created a solid foundation for his skiers with a training regimen at Blandord Ski Area. The team has grown over time. The positive results have come quickly.
Said Lussier: “It’s good to watch these kids cheer each other on.”
Other notable finishes included Westfield’s Neil Sheehan, who placed fifth on the GS. 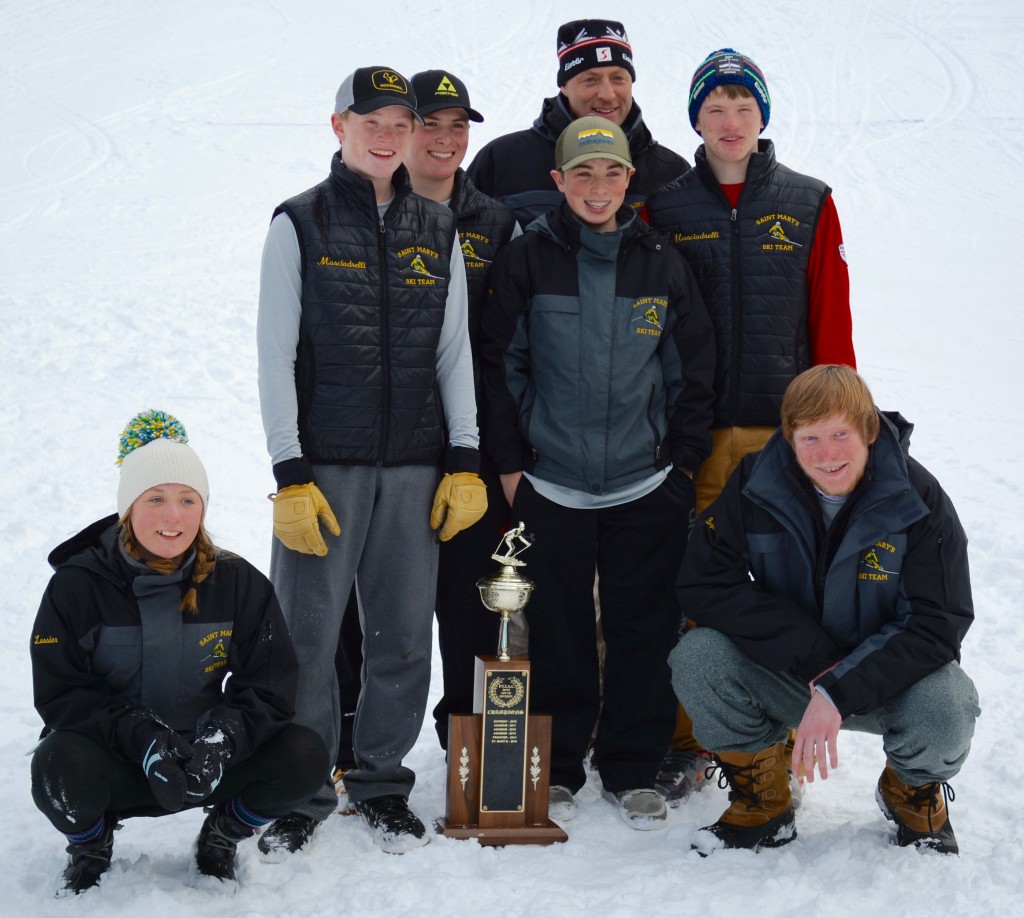 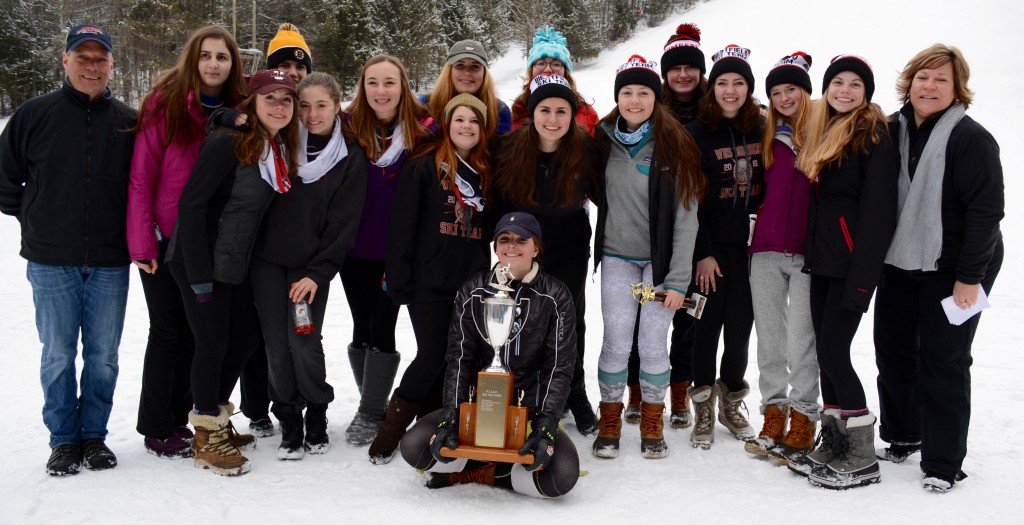