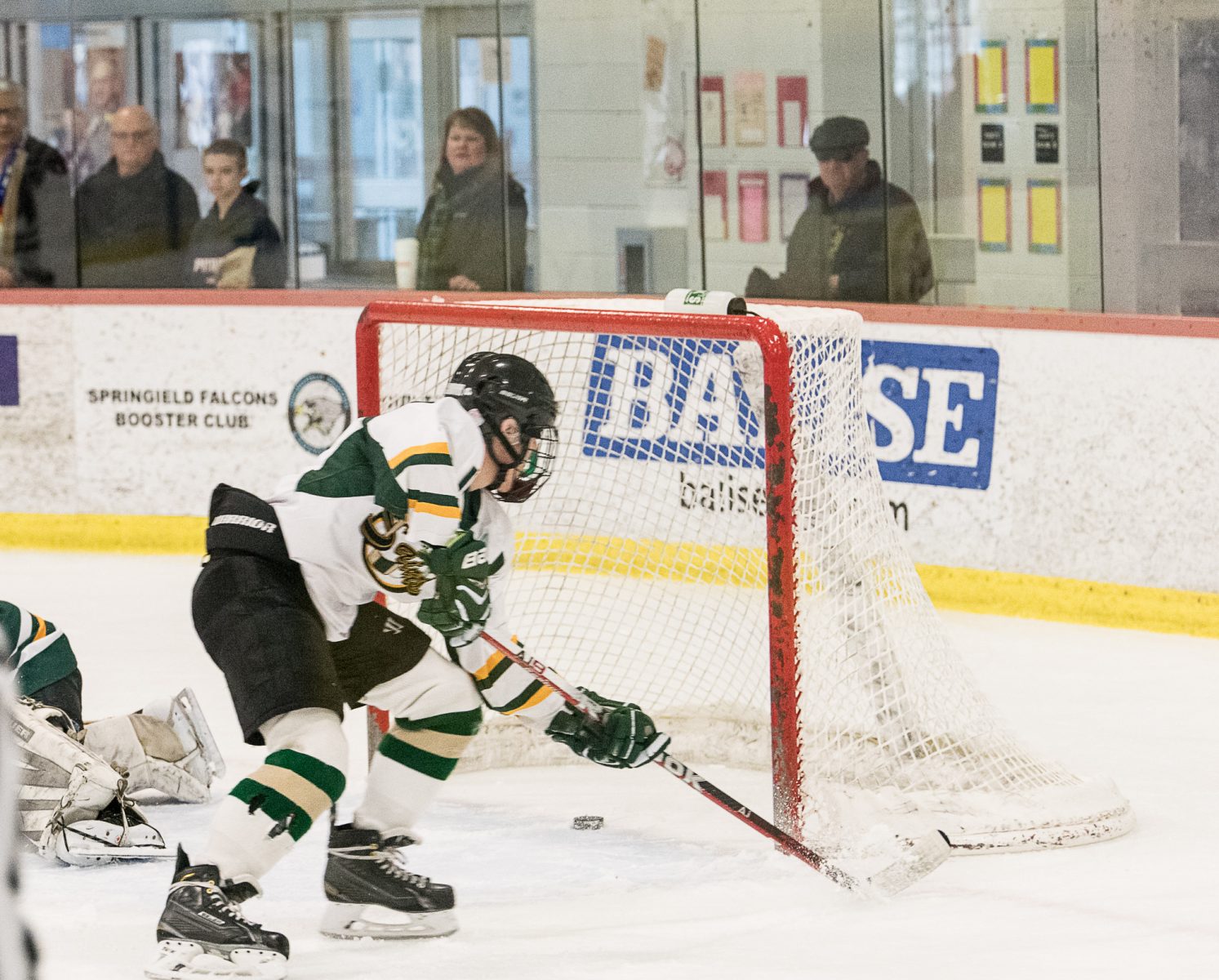 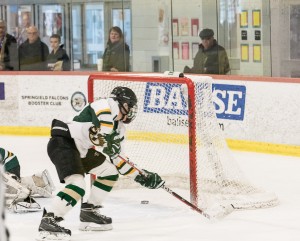 St. Mary’s Shaun Gezotis blazes past the defense en route to scoring one of three first-period goals in a game earlier this year. The Saints are one of three local hockey teams which will face a unique set of challenges this postseason. (File Photo by Bill Deren)

WESTFIELD – Local high school players, teams, coaches, and fans have had more than a day now to ponder their upcoming winter tournament matchups.
The challenge, though, got a bit tougher for one team – the St. Mary Saints’ boys ice hockey team – which learned that it will be without the services of four players for the team’s Division 3A tournament opener due to a paperwork snafu made by the school’s athletic directors’ office.
Those four players, whose names were withheld by school officials have been deemed ineligible to play in the postseason opener.
“Because of an administrative error, the (four) players were supposed to sit out two games earlier in the season and only served a one-game suspension,” St. Mary High School co-athletic director Rob Lepage said.
The suspensions were originally handed down during the regular season following several penalties incurred during a contest.
“As a result,” Lepage said, “they will be serving their second game on Tuesday.”
No. 6 St. Mary (10-9-1) will play third-seeded Wahconah (14-4-1) Tuesday at the Olympia in West Springfield at 6 p.m.
“The remaining players look forward to playing their best against Wahconah in the tournament,” Lepage said.
This season has also been a challenge of sorts for the Westfield High School boys’ ice hockey team.
Westfield (9-10-1) avoided being knocked from the playoff chase by winning a tiebreaker (win percentage) against Ludlow to claim the fourth and final postseason spot in the season’s final week. The Bombers will take on the top-seeded Longmeadow Lancers (15-4-1) Thursday at the Olympia at 8 p.m.
The Longmeadow (WHS Co-Op) girls’ ice hockey team – fueled by several Westfield players – will also attempt to navigate a rocky road as the Lancers have to travel all the way to the Cape for an opening round game against No. 16 Dennis-Yarmouth (13-7-1) Wednesday at Tony Kent Arena at 7 p.m. The Lancers (11-6-1) were seeded 17th.
HOOPS’ NOTES: The 10th-seeded Southwick Rams (15-5) earned a playoff road contest against No. 7 Granby (14-6) Monday in the West Division 3 girls’ basketball tournament … No. 12 Westfield Technical Academy (11-9) will take on the host fifth-seeded Franklin Tech (15-4) in a Division 4 boys’ hoops’ tournament opener Tuesday night at 7.