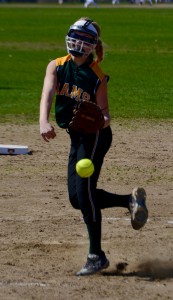 SOUTHWICK – It may have been a morning tilt, but the Southwick High School softball team was firing on all cylinders from the outset Monday at Blunt Park in Springfield.
The biggest question to ponder was which shined more brightly – the sun or the Southwick Rams?
Southwick pounded out eight runs, and junior ace Emily Lachtara tossed a complete game, two-hitter as the Rams shut out the Central Golden Eagles 8-0 at Blunt Park in Springfield. 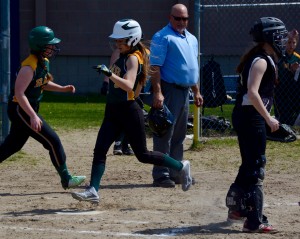 The Rams score a run as the Central catcher, at right, looks toward the field of play. (Photo by Chris Putz)

Southwick’s Brittany Penland went 2-for-4, smashing a home run and driving in three runs. Katelyn Sylvia (2-for-4) and Sydney Rogers (1-for-3) each finished with two RBIs for the Rams, and Nikki Willey had a hit and batted in a run.
Lachtara amassed a whopping 17 strikeouts. She allowed one walk, and hit two batters.

Edinger, Auclair belt homers in blowout victory
Gateway 31, Renaissance 19
Gateway stormed out of the gate in the season opener with 31 runs at the Gator Pit. Chelsea Eginger and Ava Auclair each blasted three-run homers, and collected five RBIs apiece.

Franklin downs Tigers
Franklin Tech 9, Westfield Technical Academy 1
Franklin Tech scored two runs in each of the second and fifth innings, before exploding for five runs in the sixth inning to pull away at home.
Alex Sparks (double), Chris Boyden, and Andrew Daniels had the lone hits for Westfield Tech.

Heeter hot for Gators
Belchertown 10, Gateway 2
Tyler Heeter (2-for-3, double, run scored) and Brett Turban (1-for-3) managed Gateway’s only hits of the day. Josh Webster was hit by a pitch and scored a run.
Belchertown pitcher Johnny Camerota twirled a one-hitter and struck out eight in five innings.

LATE RESULTS
BASEBALL
Chicopee 5, Westfield 2
Chicopee scored three runs in the third inning, and one each in the fourth and fifth innings to hand host Westfield a loss Saturday. The Bombers managed just one run in each of the first and third innings.