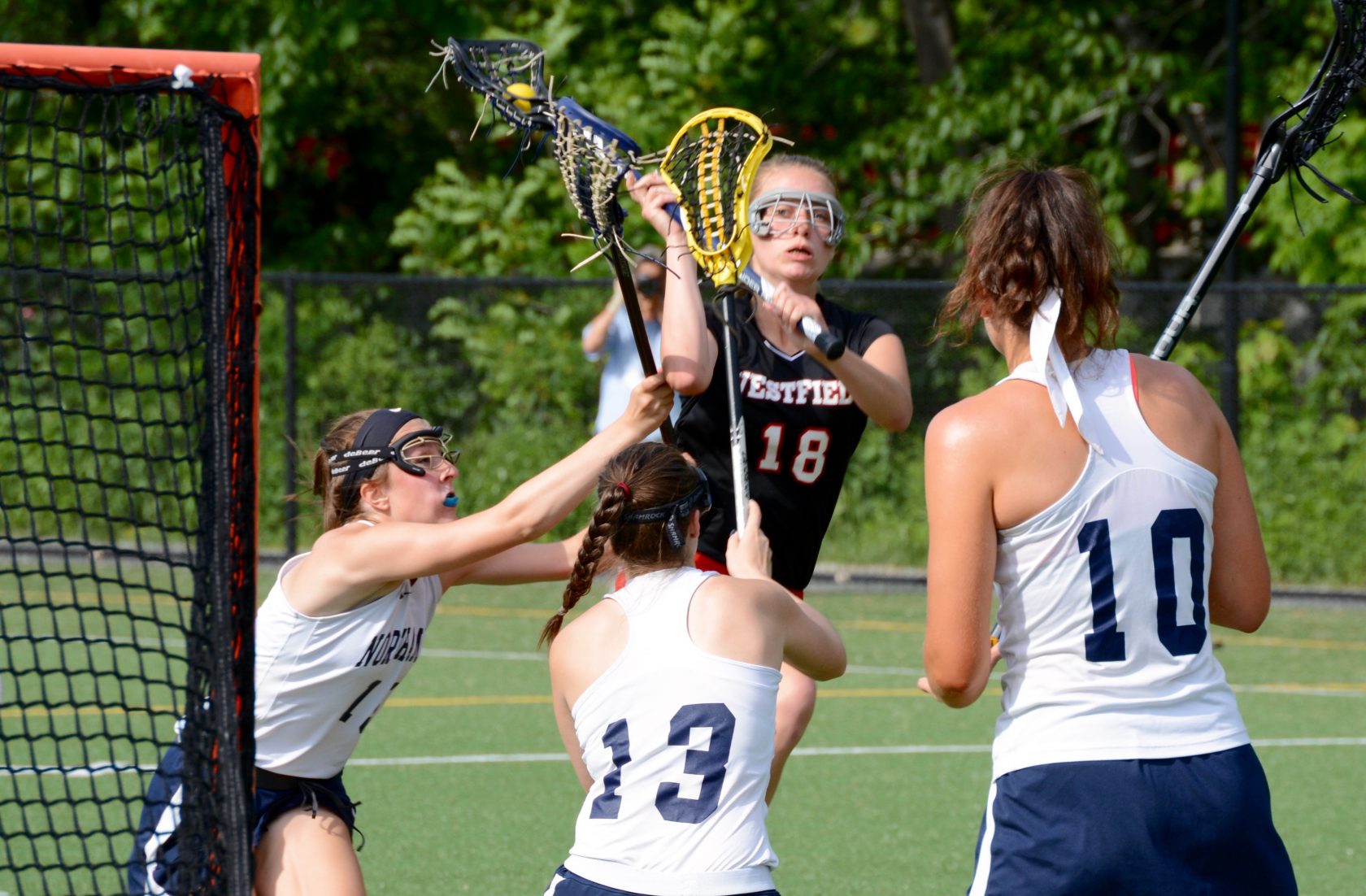 NORTHAMPTON – The Central/West Division 1 tournament came and went in the blink of an eye for the Westfield Bombers girls’ lacrosse team.
No. 11 Westfield ran up against a tough opponent, sixth-seeded Northampton, in the opening round of the playoffs Wednesday at Smith College. The Blue Devils built a 15-3 first-half lead, and cruised to a 20-10 win.
Abby Baldwin fueled Northampton’s early success, scoring four of her game-high five goals in the first half. Ursa Heidinger and Sophie Melcher recorded hat tricks for the Blue Devils. 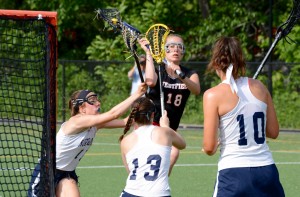 Westfield’s Rachel Gelina (18) attempts to launch a shot past a wall of Northampton defenders. (Photo by Chris Putz)

“They’re very good at the draw and I think that was the key, in the first half especially,” Westfield coach Paul Fenwick said. “Every draw correlated a goal for them, and same thing with us. We won four draws – we have four goals. They won 14 draws – they had 14 goals.”
Northampton scored two goals in the opening seconds of the game. Westfield responded with one of its own, an individual effort from Olivia Chaoush in the second minute. The Blue Devils came back with four straight goals for a 6-1 lead.
Hannah Jarvis did all she could to keep Westfield close early, scoring goals with 17:56 and 11:28 remaining in the first half, both times cutting the opposition’s lead to four.
Northampton went on a tear over the last 11 minutes of the first half, scoring eight unanswered to take a 15-3 lead into the half.
Facing a double-digit deficit and the brink of elimination, Westfield fought back with a few late goals.
Chaoush made a brilliant run from her own zone, sprinting about 65 yards down the field with the ball and dishing off to Jarvis who slammed it home with 6:05 remaining in regulation. Lexi Wood and Rachel Gelina followed with scores for Westfield in the waning minutes.
“We had a nice spurt,” coach Fenwick said. “We fought all the way to the end.”
Jarvis, Gelina, and Chaoush each finished with three goals apiece.
“It’s a start,” said coach Fenwick regarding his team’s first tournament appearance since 2012.
“We want to be here all the time and it’s got to start somewhere,” he said. “First we got to get there. Obviously the next goal is we want to win that first matchup. I think that comes with working harder during the season, get a better seed, and a closer matchup … We made some great steps in the right direction.”