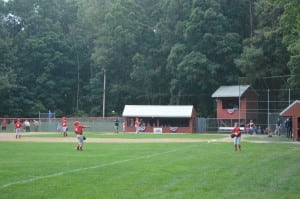 WESTFIELD – Heavy commercial vehicle exclusions on Paper Mill Road were on the agenda at the Legislative & Ordinance Committee on Thursday evening in the form of information drafted by Assistant City Solicitor Shanna Reed on behalf of the Traffic Commission, requesting that the Mass. Department of Transportation study a 24-hour heavy truck exclusion for Paper Mill.
Reed said the state had previously approved the Traffic Commission request for a heavy truck exclusion on Paper Mill, granting a 13-hour exclusion from 6 p.m. to 7 a.m. When the state recommendation came back to the City Council, residents said they had wanted a 24-hour exclusion on the residential street, which has an elementary school and ball fields on it.
The Traffic Commission then voted again to ask the state for the 24-hour heavy truck exclusion. Reed said in order to send the request to the state, the City Council has to approve it.
Ward 6 Councilor William Onyski, who chairs the L&O committee, said that he recommended keeping the 13-hour exclusion, and not going to 24 hours, because the people on Holyoke Road told him the Lane Quarry trucks would then be diverted to Holyoke Road. He said he didn’t feel that it was fair to “take the problem out of one pocket and put it in the other” by moving it to Holyoke Road. He acknowledged that both roads were in his ward, and that some residents were going to be unhappy with his vote.
Onyski then invited residents in attendance to speak to the matter. Joann Barnes of Paper Mill Road asked for support in amending the times of the exclusion. She ran down a list of meetings requesting the heavy-truck exclusion going back to 2016, including votes taken by the Traffic Commission and the City Council in support of the earlier request which had been sent to the Mass DOT.
Barnes said the MassDOT had some criteria that needed to be addressed in that request, including very specific language. She said the initial request to the state agency did not specifically request a 24-hour exclusion. MassDOT came back finding that the truck traffic did affect the quality of life in regards to the residential neighborhood, elementary school and baseball field, and suggested removal of truck traffic between 5 p.m. and 7 a.m. The Traffic Commission then voted to exclude 2 ½ ton and bigger trucks from the roadway from 6 p.m. to 7 a.m., Barnes said.
James Leahy of Paper Mill Road said he understood the concerns of the residents on Holyoke Road. He said that Police Chief John A. Camerota was in agreement with the residents that no big trucks should be on the road. “24 hours is what we need, not at night. That means trucks will be going when kids are in school and in the park,” he said, adding that it is a quality of life issue, and he was looking for the City Council’s support.
Jonathan Lane of E. Mountain Road and John S. Lane & Son said he opposed any restriction on Paper Mill Road. “There are only two ways to get in and out of the quarry. If you exclude Paper Mill Road, 100% of the trucks will go down Holyoke Road, and then have to make a left,” he said, which is difficult to do . He said currently 20% of his trucks, 30 to 40 trucks a day, go up and down Paper Mill to the quarry.
Lane also said he would be in favor of the move if the trucks could get under the bridge at the bottom of E. Mountain Road. He also said the trucks are loudest when they stop, such as at the 4-way stop at Joseph Ave. He suggested removing the stop sign and lowering the speed limit.
Lane also said the exclusion would have an economic impact, making John S. Lane & Son less competitive. Chief Camerota said the quality of life issues on Paper Mill are three to four times the problem Holyoke Road would have, which doesn’t have a school or park. He also agreed with Lane that raising the bridge at E. Mountain Road is the answer, but said nobody was pushing for that.
Camerota said the problem was not the trucks coming from Lane’s, but those cutting through from Wal-Mart that should be using the designated truck routes. “That’s what we’re dealing with every day. They shouldn’t be going down Holyoke Road,” he said.
Ward 1 Councilor Mary Ann Babinski, who was in attendance, said she heard two ways the city might be able to help alleviate the problem. One was by initiating an action plan to start the process of raising the bridge at E. Mountain Road. The second was to enforce the truck routes, and make sure the businesses are working with the city.
At-large Councilor Matt Emmershy agreed that part of the solution would be in keeping Wal-Mart and open-road truckers out of the area and force them onto the truck routes, which would also benefit Springdale and Holyoke Roads.
At-large Councilor and L&O member Nicholas J. Morganelli, Jr. asked how Wal-Mart trucks ended up on Papermill Road, and suggested openly communicating with the companies.
Camerota said there are signs for the truck routes and for the low bridge, but the truckers follow their GPS systems which show them the shortest routes, and they are not reading the signs. He said they had reached out to the businesses, but most of the trucks are independents.
Camerota told the committee that if they present the request to the state, the state has the experts to deal with some of these issues, and would come up with recommendations for the city.
Onyski said that the state was given the 24-hour exclusion and came back with the 13-hour recommendation. He agreed that maybe the language was not specific enough, as they had stressed the overnight exclusion in the request.
Morganelli said there’s got to be a way to contact GPS companies to list the truck exclusions and truck routes. “Until then, I’m going to support this. I have kids that play at that school and play Little League,” he said.
Ward 4 Councilor and L&O member Michael Burns also said he would support the motion after listening to the Chief and to the residents. The motion to recommend asking the state to study amending the exclusion to 24-hours passed 2-1, with Onyski voting against it. The request will now go to the City Council for a vote.