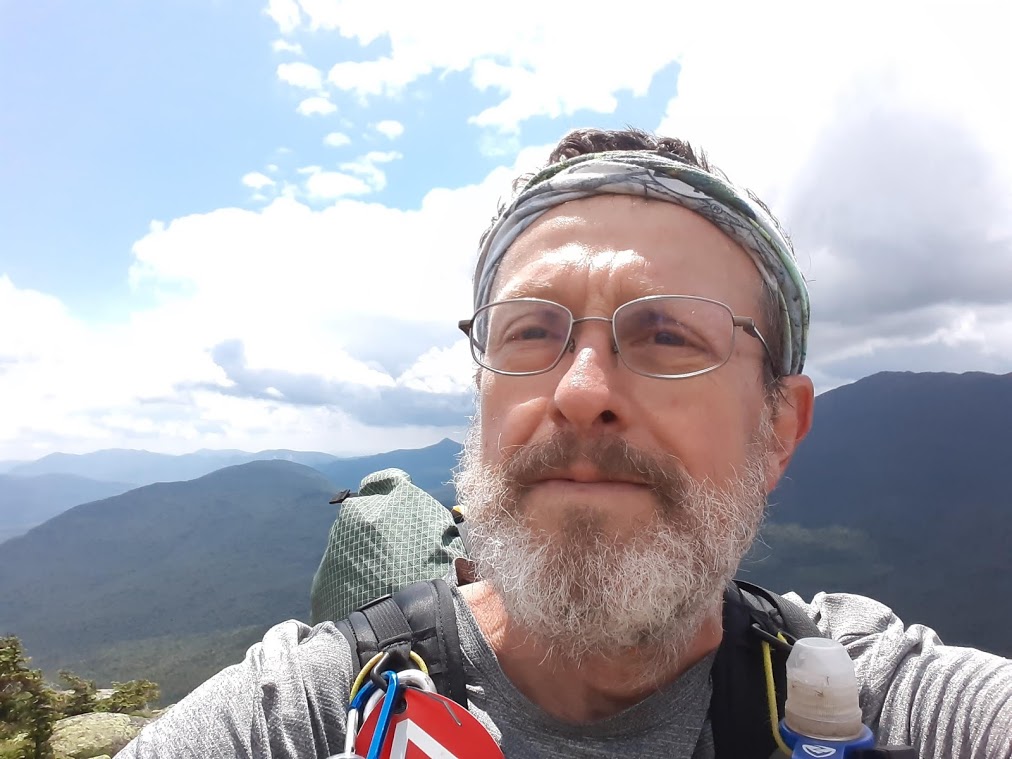 WESTFIELD-While more than 3,000 people from across the globe each year attempt to “thru-hike” the entire Appalachian Trail footpath, city resident Peter Fattorini accomplished that feat within 176 days. 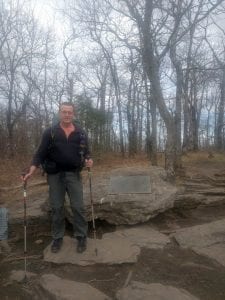 Peter Fattorini of Westfield began a 176-day trek on the Appalachian Trail from Springer Mountain in northern Georgia on Feb. 26. (Submitted photo)

From “horrible, pointy rocks” in Pennsylvania to “spectacular views” in Maine, Fattorini ended the journey on Aug. 20 at Katahdin, Maine after having experienced the 2,190 miles of trail in all kinds of weather. The Appalachian National Scenic Trail, known as “A.T.,” traverses 14 states along the crests and valleys of the Appalachian Mountain Range.

“I knew about the high attrition rate of people attempting a thru-hike but only about 25 percent achieve it,” said Fattorini, noting if some hikers injury themselves they try to return the next year and pick up where they left off. “I sprained my ankle but walked it off in Virginia.”

Starting alone in Springer Mountain, Georgia on Feb. 26, Fattorini said it was “fairly cold” in Georgia and North Carolina and saw whiteout conditions on one day.

“That day I was hiking with a couple of other people and made it to a shelter,” said Fattorini, noting that three-sided shelters are located approximately eight miles apart on the trail. “I didn’t stay that often in the shelters unless it was raining or bad weather conditions existed.”

Fattorini, who trekked an average of 12 miles a day, said he always had a “plan and a back-up plan” in the event he moved faster than he anticipated.

“It’s a lot of work,” he said. “I could walk 15 miles a day when I started out but once I came to New Hampshire and then Maine, my pace slowed down due to the high ups and downs and rocks.” 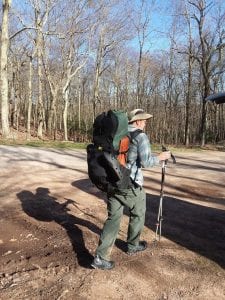 Peter Fattorini going back on the Appalachian Trail after resupplying in town. (Submitted photo)

Since Fattorini was a teenager, he knew one day he would hike the Appalachian Trail.

While he was on the trail, he turned 64.

“When I first told my father (Louis) he asked if I was crazy,” said Fattorini. “We bought maps so he could track my progress and I would call once or twice a week. By the end of the trip he said he was so proud of me.”

Fattorini also had his wife Catherine’s support, as well as his daughter Lori Gramolini, and sons, Anthony, Vinnie, and Dominic.

“I had always prepped my family that I was going to hike the Appalachian Trail one day,” said Fattorini.

An early retirement package from United Technologies Corporation last May allowed Fattorini to set his sights on this lifelong goal – and prepare his body, mind and spirit for the challenges ahead. His career had focused on the space and sea, including building backpacks for space suits, space hardware for the space shuttles, and more recently, space station logistics for the Mars project.

“Everyone has a trail name when you hike the Appalachian Trail,” said Fattorini, adding his trail name was Space Rock. “Space was from my job and rock is another name for Peter.”

After retiring, his training kicked into high gear – carrying a 40-pound backpack loaded with sandbags and bottles of water.

“I have trails behind my house so I would go up and down the hill or walk with the backpack every day,” he said, adding that training built up his legs and core. 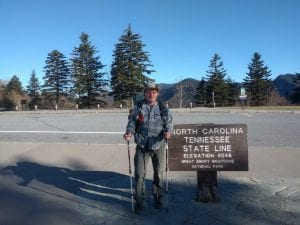 Once the trek was underway, Fattorini said he kept in contact with his wife daily through a two-way Garmin inReach satellite device that had an SOS feature in the event disaster struck.

“Being a family guy it was important to me to stay in close contact with Cathie,” said Fattorini.

Fattorini admits there were highs and lows while on the trail, however, he always toughed it out. 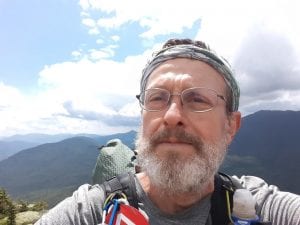 Peter Fattorini takes a selfie in the White Mountains of New Hampshire along the Appalachian Trail. (Submitted photo)

“The high highs are when you are on a mountain top on a gorgeous day and it’s beautiful and you realize you are living the dream,” said Fattorini. “The low lows include waking up and it is raining and you pack up and are walking in the mud and dealing with bugs and slippery trails.”

Fattorini acknowledged there were a few days when he would come to a road and consider calling off the trip.

“I realized you don’t quit on a bad day,” he said. “Always give it one more day. There are times that it gets tough and the next day the birds are singing and you forget about the bad day.”

Highlights of the trip included a brief visit from his wife, daughter and grandchildren in Virginia who had rented an Airbnb for a few days so he could connect with them. Also, one friend hiked with him in Pennsylvania for a couple of days and another friend invited him to stay at his place in Vermont for one night.

Fattorini was also impressed by the “trail angels” he encountered along the Appalachian Trail.

“There are people along the route known as trail angels who set up card tables with food, coolers, drinks and snacks to offer free to hikers since they know we are going through a lot of calories,” said Fattorini, adding, “most people” he encountered on the trail were nice because everyone had a common goal. 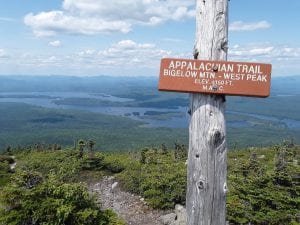 “I was never uncomfortable while hiking but there was a rumor spreading that there was a murder on the trail,” said Fattorini who was in northern Virginia at the time. James L. Jordan, 30, of West Yarmouth, Mass., was charged in the fatal stabbing of one person and wounding another after a hiker’s GPS device sent out an emergency signal in southwest Virginia.

While his encounters with hikers along the path were cordial and supportive, his only unusual animal encounter was with a grouse.

“I had one of the strangest times in the woods when I noticed something brown running toward me,” said Fattorini. “It was a grouse and I thought it was going to bite me in the leg because it came just six feet from me then stopped and turned around.”

Fattorini surmised the grouse was herding its chicks.

“I did see rattlesnakes in Pennsylvania and New York and moose in Maine but I did not see any bears,” said Fattorini, adding shortly after he returned home a bear ran across his driveway when he putting out his trash can.

Fattorini, who served as an assistant outdoor leader and a scout leader for 20 years with Westfield Boy Scout Troop 109, said all of his years hiking and taking scouts – including his sons – on hiking trips to national parks prepared him for this ultimate journey.

“I learned from this experience that I was mentally prepared and capable of taking on the challenge,” said Fattorini. “I didn’t have any fear of anything and I didn’t let anything get in my head.” 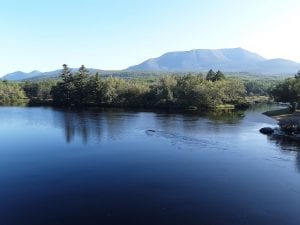 Peter Fattorini took this photo of the northern terminus of Katahdin, Maine from the Abol Bridge in Maine. (Submitted photo)

Fattorini added he enjoyed listening to the wind, birds, and the streams.

“A lot of people had podcasts on as they were walking to kill time,” said Fattorini. “For others like myself, I was rethinking my life and was very thankful for all of the support I had and from my wife for helping out.”

Fattorini also acknowledged a higher power that was an important part of the journey.

“I did a lot of praying on the trail and I thanked my God every day,” he said. “I was thankful I was able to make it and was overjoyed when I reached Katahdin.”