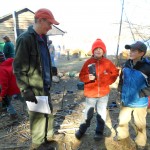 Troop 821 Senior Patrol Leader Jonathan Huntley speaks to Jack Koske and Nathan Black from Webelos Pack 110 based at Highland Elementary School in Westfield as part of their ”Webelos Welcome” event on Saturday at Camp Moses in Russell. (Photo by Amy Porter) 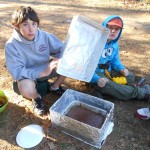 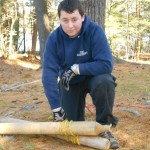 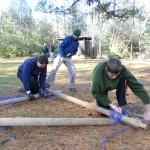 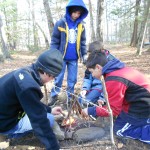 RUSSELL – On Saturday, Boy Scouts from Troop 109 and Troop 821 in Westfield gathered at the Horace A. Moses Scout Reservation in Russell for two separate camps aimed at showing Webelos and other boys from the community that scouting is fun.
Troop 109, based at St. Mary’s Parish in Westfield, was running the Survivor Man Adventure Camp for the fifth year in a row. Boys in grades five through eight in Greater Westfield were invited to participate in building and crossing rope bridges, making primitive survival shelters and an obstacle course, fire building, and other outdoor challenges.
Dave Flaherty, Troop 109 Scoutmaster and Westfield City Councilor, said the purpose of the camp is to get kids that are the right age exposed to the fun stuff in scouting.
“Many of them are not scouts,” Flaherty said. “Historically, we’ve brought in more kids who are not exposed to scouting.”
One of the young people brought into scouting through the Survivor Man Adventure camp was Nick Albano, 14, the head Boy Scout in charge on Saturday. Albano, who was building the Monkey Rope Bridge with several other scouts, said, “About two and a half years ago, I saw a flyer for the Survivor Man Adventure and came here. This was by far my favorite event,” Nick said, pointing at the bridge, which he explained is made by building two A-frames, tying them together, and running three ropes to walk across the bridge.
After the camp, Albano joined Troop 109 as soon as he turned 12.
“I worked my way up from New Scout Patrol to Patrol Leader, then in December of last year ran for Senior Patrol Leader, the highest leadership position, and was elected by popular vote.” said Albano.
As Senior Patrol Leader, Albano said, “I run the planning meeting every month, the Patrol Leader’s Council, and we plan the events for upcoming months.  At this event, I make sure that everything gets done, and everybody knows what they’re doing.”
Twenty-five participants signed up for Saturday’s event, which Albano said was a smaller number than anticipated, “But we’re still going to have fun,” he said.
Other recent events sponsored by Troop 109 include a challenging hike in the White Mountains the weekend of the October snow storm; a 50-mile hike in the Zion and Bryce canyon in Utah in April; and a 100-mile canoe trip in the Adirondacks two summers ago, the latter two being Nick’s favorite adventures to date.
As for how scouting has influenced him, Albano said, “I really want to join the military now, most likely the Air Force.”
Troop 821 Scoutmaster Joe Mitchell, Westfield Veteran’s Services Officer, said they called their camping event “Webelos Welcome.” Thirty-six boys were in attendance for activities including fire building, shelter building, hatchet throwing and baking brownies in a cardboard oven over charcoal.
Jonathan Huntley, 12, is Senior Patrol Leader for Troop 821, which is based in Our Lady of Blessed Sacrament in Westfield. Mitchell said Huntley was one of their youngest Senior Patrol Leaders, and was doing a “phenomenal job. It’s a demanding job keeping boys 18 to 11 on task,” Mitchell said.  Troop 821 rotates the position every six months, to give more boys the opportunity to develop leadership skills.
“Usually, I’ve been leading the meetings,” Huntley said. “This is the first big campout since I’ve been Senior Patrol Leader. It’s very important to get the Webelos involved, to get more coming into our troop. It’s also fun to do this stuff,” he added.
As for Huntley’s future goals, he said, “I’m hoping to make Eagle Scout by 14. I’m already Star, and there are two more ranks left before Eagle.”