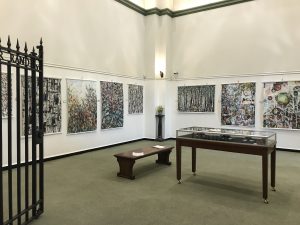 WESTFIELD — The Jasper Rand Art Museum at the Westfield Athenaeum reopened this week for the first time since the start of the COVID-19 pandemic, with a new exhibit of watercolors, mixed media and pottery by local artist Insun Russell.

Her show is titled “Surrounded by the Forest” and can be viewed during regular Athenaeum hours. A wine and cheese gallery reception is slated for 6-7:30 p.m. Thursday, Sept. 16, allowing visitors to meet Russell, socialize and view the exhibition.

“The reason that I think this exhibit will be of interest to the community is that Insun has developed a unique style based on her impressions growing up in Korea, learning techniques characteristic of Asian art, and then combining that with her experience living in the United States and absorbing many of the ideas embodied in 20th century Western art,” said Athenaeum Executive Director Guy McLain in a news interview last month, adding, “Artists give us unique ways of seeing the world, and given Insun’s unusual history, she brings a highly original perspective to her art.”

Russell, who was born in Seoul, South Korea, studied at Hongik University in Seoul. She met her husband, Bill, while he was serving in the U.S. Air Force there in 1976. The couple married in 1977 and relocated to the United States, where she continued her studies at Santa Monica College. They later moved to the town of Russell, where her husband has family ties. Her son, Jeremiah, is married and serves in the United States Army as a helicopter pilot.

During the exhibition, which runs from Sept. 7 through Oct. 30, visitors can sign a guest book and give their feedback. The show is sponsored by Westfield Gas & Electric and Whip City Fiber.