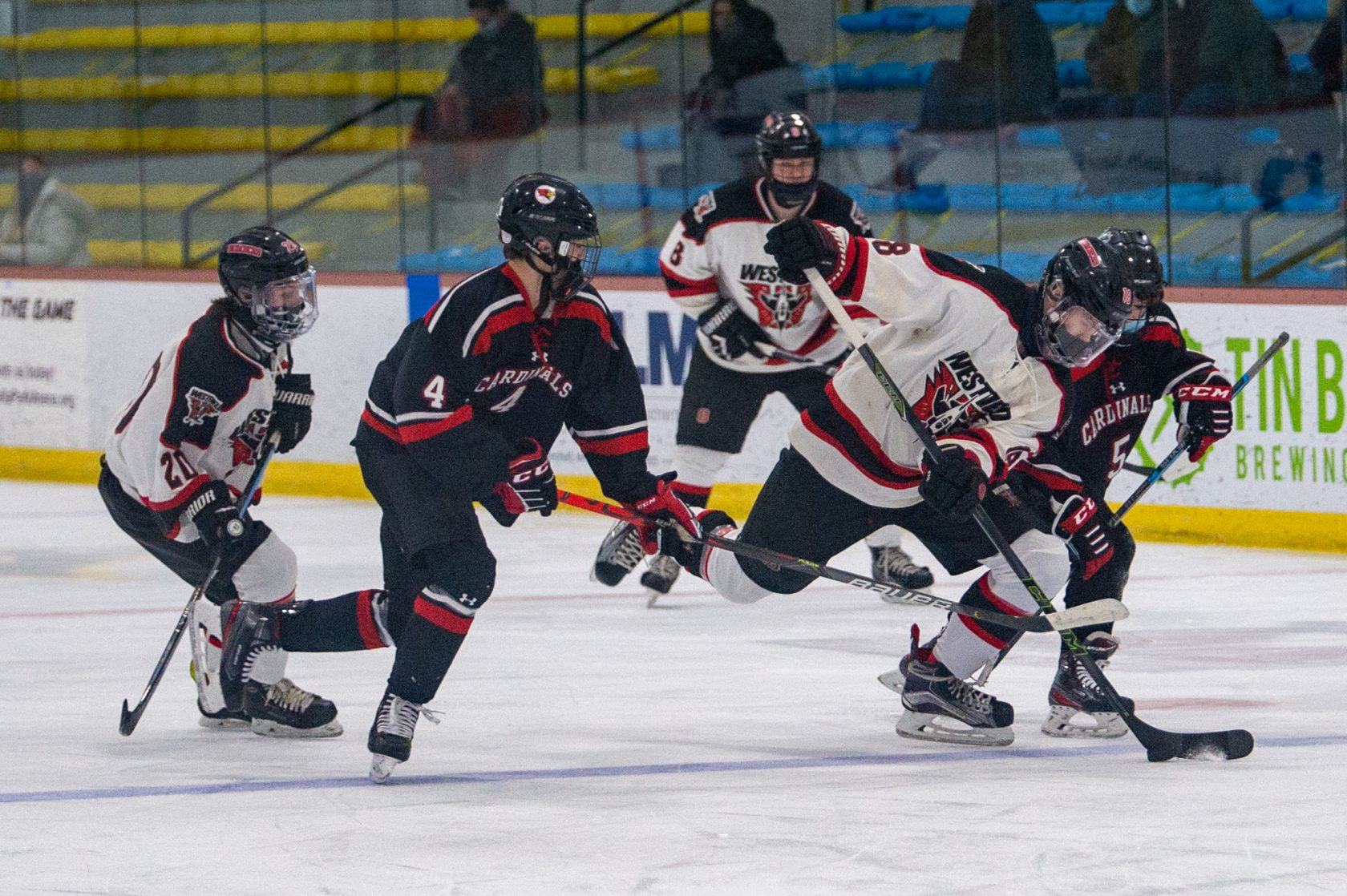 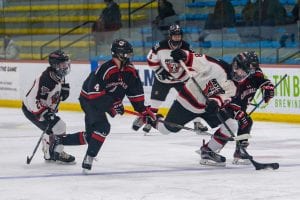 WESTFIELD – The Westfield High School boys ice hockey team finally found a cure to their recent ailments, a healthy dose of Aidan Fitzgerald and a spectacular defensive effort led by Bombers goaltender Sean Rowbotham.
Fitzgerald recorded a hat trick and Westfield held off Pope Francis 4-1 in a penalty-marred hockey game Friday night at Amelia Park Arena.
It was the first win for Westfield (2-2-1) since a season-opening win over Agawam. Since that victory, the Bombers had tied the West Springfield Terriers 2-2 and suffered back-to-back losses to the Longmeadow Lancers.
“We took advantage for the first time on somebody’s turnovers,” Westfield boys ice hockey coach David Pelletier said. “We’re showing progression and growth. Effort equals results. Our players have been giving the effort. Now they’re finally getting results.”
Pope Francis tested Westfield early when the Bombers had to play shorthanded twice after committing penalties. The Bombers passed, successfully killing off penalties early in the first.
Westfield then took advantage of its own power play a short time later when Fitzgerald plucked the puck out of the front of the net and chipped in a goal with 5:15 remaining in the first half. Tyler Kutt and Brandon Shuman assisted.
Thirty seconds later, Pope Francis scored the equalizer against first half goaltender C.J. Czarnecki. Westfield’s defense briefly bent, but did not break, limiting its opponent’s scoring opportunities despite both sides drawing two more penalties apiece over the final five minutes of the half.
Things got a bit chippier between the two teams in the second half with officials calling a multitude of penalties and ejecting a Pope Francis player. Fitzgerald scored two more goals, one with 13:49 remaining in the second half (Connor Fitzgerald assisted) and another with 4:23 left (Kutt and Mike Antonellis assisted). Kevin Hosmer tacked on an insurance goal with 3:46 left on the game clock. Matt Kotfila assisted.
“We had a lot of young guys step up; we had a lot of senior guys coming back making good plays. Overall it’s a good team win,” Aidan Fitzgerald said.
Westfield second half goalie Rowbotham made several big plays down the stretch, and earned the victory in net.
“We played as a team instead of individuals,” Rowbotham said. “We just came out flying and we didn’t want to lose today. We’re sick of it.”
With a renewed outlook of optimism, Westfield will continue look to capture a healthy dose of wins from here on out.
NOTES: Westfield followed up Friday night’s contest with a 2-2 tie against Minnechaug Saturday at the Olympia in West Springfield. The Bombers rallied from a 2-0 deficit with two second half goals, one each from Connor Fitzgerald and Brandon Shuman. Aidan Fitzgerald had two assists. Shuman and Fitzgerald also each had one.

BOYS BASKETBALL
Brownies down Bombers
Agawam 46, Westfield 38
Colin Smith exploded for nine of his game-high 11 points in the second half, and Agawam held off Westfield Friday night. Brian Strange led the Bombers with 10 points.