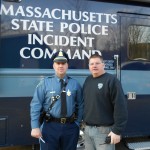 On Friday evening, a drunk driver took out a telephone pole in Huntington, effectively eliminating the 667 Verizon exchange for Huntington and parts of Chester.
At 11:20 pm Friday, 21-year-old Nathan Callahan of Chester rolled his 2006 Jeep Wrangler into the pole, located in front of the Huntington Public Library, taking down phone lines. He then left the scene, and was arrested a short time later by the Russell barracks state police, and charged with operating under the influence of liquor – second offense, negligent operation of a motor vehicle, marked lane violation, leaving the scene of a property damage accident, and resisting arrest.  He was taken into custody in the Russell barracks, and will be arraigned on Tuesday, according to state police.
Huntington Police Chief Robert Garriepy said, “He took out the one pole you don’t want to take out.”
Initially following the accident, Verizon 667 exchange numbers were down, along with 911 for those customers.  Comcast customers with the exchange were still functioning.   State Police Lt. Andrew Bzdel, in charge of the response, said the telephone pole was the main trunk line, carrying 1800 pairs of wires.  After the accident, only 378 were still functioning.  Bzdel explained, “Once they start splicing the wires, the 378 remaining will go down. Hopefully, they’ll have it back up in three days,” he added.
A mobile command center was set up at the Huntington Department of Public Works on Saturday at 3:00 p.m. for the duration of the outage.  State police will be working with the Huntington police, fire and emergency services and the Massachusetts Emergency Management Agency (MEMA) all under one roof inside the Massachusetts State Police Incident Command vehicle “in order to have a unified command,” according to Bzdel. State police have also hired extra patrols that will be driving with their lights flashing to be visible to people who need them, Bzdel explained, saying residents should not be alarmed.
Garriepy said the mobile command center costs half a million dollars, and will “connect us with the outside world.” As to who will pay for it, Garriepy said, “Right now, we’re not sure.”
Verizon crews worked through the night over the weekend and service was completely restored as of Sunday night, according to reports.