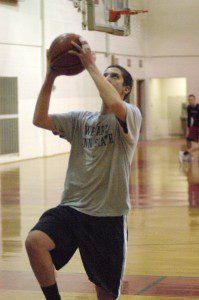 The Westfield Bombers take part in Day 2 of tryouts for the boys’ basketball program Tuesday. (Photo by Chris Putz)

WESTFIELD – There is no “I” in T-E-A-M is a cliché nearly eveyone is sports is familiar with. That old saying will take on a renewed meaning for the Westfield High School boys’ basketball team during the 2014-15 season.
If Westfield is to make a return trip to the postseason for the first time in two years, the Bombers – who return nearly every player from 2013-14 – will need to distribute the ball more evenly than ever before.
“This is the first time that we don’t have a true center,” said Westfield coach Bill Daley, whose team has just one player listed over 6-feet, 2 inches. “If we play the right way and share the ball, we have a chance to be really good.”
Westfield returns of eight of 10 players who each saw significant minutes last season, including senior guard Isiah Headley, a three-year starter who has shown flashes of brilliance during an injury plagued career. 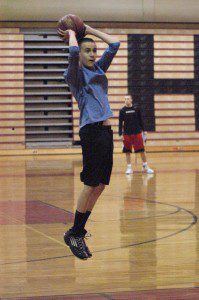 Seniors Colin Dunn, Manny Golob, Richard Barnett, Nick Hall, and Eric Laplante each return, and juniors John O’Brien and Chris White are each expected to have a role in determining the team’s final outcome this season.
Some combination of those players is expected to push the ball in an up-tempo, 3-point shooting offense, and apply a non-stop full-court press on defense.
That style of play should suit the Bombers just right in the Suburban League, which poses one legitimate threat in Chicopee, according to Daley. Two-time defending Western Massachusetts Division I champ Putnam, which returns three key starters, and Central, a rock-solid championship contender, should dominate the landscape of high school boys’ hoops, which leaves Westfield and others to carve out a name for themselves among the rest., he said.
“On paper, Putnam is unbeatable again,” Daley said. “Other than that, I think we are right there with anybody. That being said, I think we are on the cusp either way … If we’re playing late into March, it will not be unexpected.”
Last season, Westfield stumbled out of the gate with an inexperienced, unproven group of ballplayers, still playing in the shadow of former Bombers’ teams which reached the finals in consecutive seasons (2009-11).
By season’s end though last February, Westfield had grown into a strong unselfish group of players who grasped the team concept with relative ease. The Bombers finished the season 9-11, missing out on the tournament by just one win.
“We got better and better and better,” said Daley, who completed one of his finest coaching performances. “It was fun to coach.”
Westfield is hoping to pick up where it left off last season. The Bombers will get an early indication of that when they tip off at Agawam on Dec. 15.
Said Daley: “If we really don’t care who scores, we are going to be in good shape.”
The season is just about to take shape.