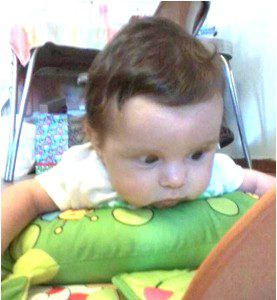 An Amber Alert has been called off after a 14-week-old girl, Gaebria Kozaczek, above, was found in Virginia. (Photo courtesy Massachusetts State Police.)

WESTFIELD – State Police have called off an Amber Alert in the Commonwealth that was issued in response to a request by Westfield police who were searching for a city woman, Cheryl Kozaczek, 28 of 80 Woodmont St., who was believed to have abducted her 14-week-old daughter, Gaebria.  The 3-month-old was found safe in Virginia.
Troopers reported earlier today that state police in surrounding states had been alerted and an Amber Alert was also issued as they searched for the missing infant beyond the borders of Massachusetts.  State Police spokesperson David Procopio said at approximately 2:24 today that State Police were investigating “credible information” that Cheryl Kozaczek headed south with the baby down the Eastern Seaboard toward the Mid-Atlantic states. Information was shared with departments around the country, in hopes of narrowing the search for the child.
City police were notified at 5:51 a.m. today by the infant’s grandmother that her daughter Cheryl had taken the infant and her gray Toyota Tacoma pickup truck.
The child was living with her grandmother, who has legal custody of the girl, and her mother at her grandmother’s home.
State Police report that the young woman left her home with her baby about 1 a.m. this morning.
Westfield Police Capt. Paul Nunez said this morning that he was told that the young woman was “not mentally stable.”
Photographs of the woman and her daughter were made available by State Police who also issued a representative image of a gray Toyota Tacoma pickup truck.