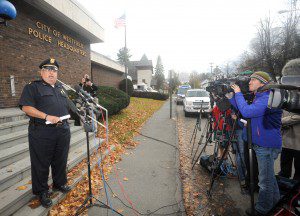 Westfield Police Capt. Hipolito Nunez faces a battery of television cameras Wednesday afternoon as he announces that an Amber Alert had been issued after a 14-week-old infant was apparently kidnapped by her mother. The baby girl was located and her mother was arrested later in the afternoon by Virginia State Police on Interstate 95 near the North Carolina border. (Photo by Carl E.Hartdegen)

WESTFIELD – A 14-week-old infant apparently abducted by her mother was found safe yesterday afternoon when Virginia state troopers, acting on the basis of an Amber Alert, made a traffic stop on Interstate 95 about 15 miles for the North Carolina border.
The Amber Alert had been issued by Massachusetts State Police late yesterday morning at the request of city police who had been working on the child’s abduction since 5:51 a.m. when the child’s grandmother, who has legal custody of the girl, Gaebria Kozaczek, reported that her daughter had apparently taken the baby and fled in a pickup truck stolen from her.
The State Police acted on the request and issued the Amber Alert that notified police departments nationwide of the missing infant.
The State Police advisory noted that there is “reason to fear for the child’s safety and well-being” and, at a 2 p.m. press conference, Police Capt. Hipolito Nunez explained that the suspect, Cheryl Kozaczek, 28, is mentally unstable.
He said the child’s grandmother had been granted custody of her granddaughter because of the younger woman’s mental health issues and said that Kozaczek had been living with her mother, brother and the baby’s father at a Woodmont Avenue address.
He said that it is not known why the woman fled with her baby but the woman’s mother told police that her daughter was upset about an upcoming court appearance.
Nunez said that Kozaczek has been living in the city for a relatively brief period since her daughter was born and does not have friends in the area.
Her mother told police that her daughter had spent time in California and speculated that she may have been trying to return there but a 1:16 p.m. update from State Police reported that they were “investigating credible information that the suspect headed south from New England along the Eastern Seaboard to the Mid-Atlantic Region.”
A subsequent State Police update, at 4:23 p.m. was more specific and said that information developed showed that Kozaczek “was likely in Maryland, and shortly thereafter that she was continuing to head southbound through the Richmond, Va., toward points south.”
The report went on to say that Virginia and North Carolina state police were advised of the suspect’s movements.
North Carolina troopers staged near the border in anticipation of Kozaczek’s arrival but were not needed as the stolen vehicle she was driving was stopped by Virginia State Police at about 2:45 p.m. on the southbound said of Interstate 95, in Emporia, about 15 miles from the border with North Carolina.
Westfield Police Det. Lt. David Ragazzini said a short time later “The good news is that the child is safe,” and went on to say “We’ll have to deal with the logistics of getting her back here.”
Warrants had been issued in Westfield District Court on charges of kidnapping of a minor by a relative and larceny of a motor vehicle so Kozaczek will face those charges when she is returned to the Commonwealth.