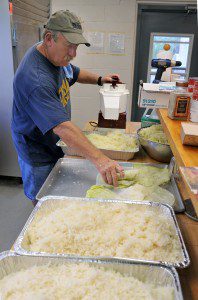 Trent Taylor, a volunteer cook for the upcoming Dozynki Festival, shreds fresh cabbage that will be used in the kapusta this weekend. The event is a major fundraiser for the Saint Joseph’s Polish National Catholic Church in Westfield, with festivities starting at noon on Sunday. (Photo by chief photographer Frederick Gore)

WESTFIELD – The St. Joseph National Catholic Church’s Dozynki, a Polish Festival, is set for this Sunday and will feature homemade Polish fare.
Parishioners were cooking up a storm this week, preparing and making 400 pierogi and 1,200 golumpki, as well as cabbage soup.
Trent Taylor spent yesterday morning shredding cabbage for soup and said a dozen volunteers helped prepare this year’s feast.
“We always make the pierogi, but Fr. Joe usually makes the golumpki,” Taylor said of St. Joseph’s Pastor Fr. Joseph Soltysiak. “He had knee surgery though, so we’re all pitching in.”
The volunteers used all Soltysiak’s ingredients – tomato soup, ketchup, stewed tomatoes and spices for the sauce  – mixed with rice and ground beef  wrapped in a perfectly steamed cabbage leaf.
Taylor, a member of the church for 30 years, said 120 pounds of cabbage was used for the pierogi alone.
“Today we went through 28 heads of cabbage the size of basketballs,” said Taylor.
The chefs began cooking the cabbage, beef and rice for the golumpki Wednesday so everything would be cooled off for mixing, wrapping and baking Thursday.
“It takes about two-and-a-half hours to cook,” Taylor said.
Preparing for Dozynki is a labor of love for the parishioners.
“It’s a tradition,” said Ed Brcyz.
Admission to Dozynki is free.  However games, raffles and food come at a reasonable cost, said Taylor. Polish singers and dancers will entertain crowds. Fare includes cabbage soup, cabbage and cheese pierogi, golumpki, hot dogs and hamburgers.
“Our organizations, such as the altar servers and youth group, will also have booths with fundraising games,” said Taylor. “This is one of our biggest fund raisers of the year.”
The event takes place Sunday from 12-5 p.m. at the St. Joseph Social Center behind the church on the corner of Main and Clinton streets.