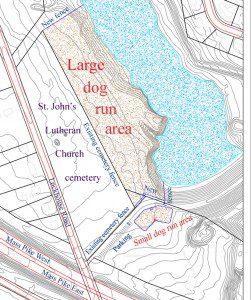 A new plan for a dog park in the city features two dog run areas on and adjacent to the currently unused Arms Brok Park off Lockhouse Road. (Graphic by Heather Miller, assistant city engineer)

WESTFIELD – The members of the city’s Flood Control Commission were handed an option for use of property under their control adjacent to the Arms Brook Reservoir when city engineer Mark Cressotti presented them with a plan at their meeting last week to use part of the property as part of a dog park under consideration.
More than a year ago, members of the Friends of the Westfield Dog Bark, working with the Parks and Recreation Commission, had considered utilizing part of the unused Arms Brook Park for the dog playground that they were trying to build.
The Friends are still working to create a dog park in the city and, after considering other locations in the interim, have returned to Arms Brook with the blessing of Mayor Daniel M. Knapik.
Knapik said during an interview yesterday that he remembers Arms Brook Park years ago when he worked for the parks department and said “It’s a really cool place not too many people know about.”
“It’s a taxpayer asset” he said. “We should get it to the shape that people could use it.”
The Friends found, when they considered the area a year ago, that the property off Lockhouse Road is under the control of two separate city authorities, the Flood Control Commission, which controls the dam and the banks of western side of the reservoir, and the Parks and Recreation Commission which controls the area of the former park which older residents remember.
The Friends have, since the group was founded, enjoyed the support of the park officials, primarily through that commission’s chairman, Kenneth Magarian.
When asked about the newest plan, Magarian said “We support that 100 per cent.” He added, “We’re going to do everything we can to help.”
A year ago, the suggestion to use property at Arms Brook for a dog park floundered because of infrastructure costs.
The Friends have been raising money for project for about two years and have gathered sufficient funds to pay for fencing, mulch and other amenities at a dog park but the cost of making a driveway and a parking area at the former park seemed beyond their means.
However, Knapik said that a gravel driveway and parking area, as well as some of the other needed improvements, could be installed with city assets.
The current plan calls for two fenced areas where off leash dogs, and their handlers, could play, exercise and socialize.
The entrance to the park is located between the turnpike overpass and the eastern boundary of the St. John’s Lutheran Church cemetery.
Under the current plan, an existing rudimentary driveway would be widened and refurbished and a row of parking spaces would be laid out adjacent to the driveway.
A small fenced enclosure at the end of the driveway would be created as a supervised play area for dogs while a much larger, wooded area would also be available for dogs which could run free in the woods.
The cemetery’s eastern fence would define the edge of the public driveway while the cemetery’s northern fence would serve as one of the borders of the large dog run. The shore of the reservoir would mark the second long boundary of the larger play area leaving only relatively short stretches of fencing to be erected on the shorter eastern and western borders.
On the east side of the large play area, the fence which would be erected would connect with the fence of the smaller dog run to contain users and discourage them from trespassing on the face of the flood control dam. A locked gate would allow access to the dam for maintenance workers.
The members of the Flood Control Commission expressed a variety of concerns when the proposal was presented.
“I have questions, lots of them” said the commission’s chairman, James Phillips.
Commission members primarily expressed concern about detrimental effects of persons and dogs walking on the face of the dam and but also mentioned other issues.
“Do we have to worry about degradation of the embankment?” asked Phillips.
Cressotti replied “I don’t believe the use would threaten that.”
Other concerns mentioned were the possible erosion of dam’s southern bank and the movement of silt into the reservoir, the possible spreading of diseases among intermingling dogs at the facility because some may not have been inoculated, traffic concerns about users leaving the park where the turnpike overpass limits visibility of oncoming traffic and Phillips also questioned the environmental effects of dogs which are allowed to “swim and pee and poop in the water” although he did acknowledge that the dam does not retain drinking water.
Cressotti pointed out that the commission’s responsibility is the dam itself and reiterated that foot traffic is not a serious threat to the integrity of the dam, unlike the use of mechanized vehicles in the area which is a real concern.
He said use of ATV’s in the area would probably be curtailed as “The use by responsible parties will deter the misuse that goes on.”
He said that maintenance concerns would be addressed by the Friends of the Westfield Dog Bark.
He said that the benefit of an organized group of persons interested in the area is that “There’s a friends group to go to and say ‘This isn’t being maintained or kept up’” if there are problems.
Cressotti and the commissioners agreed that most of the problems mentioned are the responsibility of other agencies, such as Conservation Commission and the Traffic Commission.
The commission was not asked to vote or approve of the proposal at this stage of the process but commissioners said they would like to hear from the Friends.
“I think there are several concerns that I’d like to hear their answers to” Phillips said.
Cressotti was asked to invite a representative to the commission’s next meeting, on Aug. 15.