Last summer, I attended the opening night of Berkshire Theatre Group’s Broadway-bound Children of A Lesser God, which dealt with issues faced by deaf people, had deaf actors in the cast, and attracted a larger than usual proportion of deaf and hearing-impaired audience members. Some ushers signed, and two ASL interpreters took to one side of the orchestra section to sign the performance for those audience members who wanted it. It was a unique experience for me to participate in. I became interested in the way that theatres now do what they can to make all audiences comfortable. 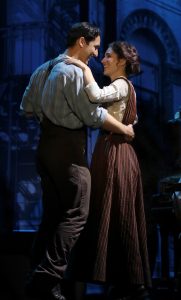 Goodspeed’s Rags will have an open caption performance on December 1. Sean MacLaughlin and Samantha Massell star in the musical hit. Photo by Diane Sobolweski.

Berkshire Theatre Group  also caught my attention with their sensory-friendly performances. They describe it as “a production that is slightly modified to accommodate individuals with sensory-input disorders, such as people on the autism spectrum. At this performance, you will notice relaxed “house rules;” people may need to get up, move around, and leave the theatre during the performance. There is no expectation that the audience will be completely quiet during the performance. Our goal is to create an environment where people with autism or sensory needs, along with their families, can enjoy coming to the theatre together and will feel comfortable, supported and free to be themselves”.Other venues have jumped on this bandwagon. 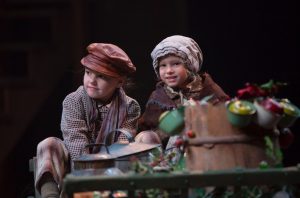 Hartford Stage has a sensory-friendly performance of A Christmas Carol on December 2. Photo by T. Charles Erickson.

The Springfield Symphony Orchestra is getting rave reviews for its new Real Time Concert Notes, which delivers program information by text to a patron’s cell or tablet as the performance progresses. The Hartford Symphony Orchestra has a new Intermix series, which features musicians mingling and performing in a non-traditional setting. Their next event, Alleged Dances, brings audience and musicians together at the Onyx Spirits Company in Hartford, on February 22. Both of these programs make classical music attendance more user-friendly.

Our area theatres and concert halls already provide a  myriad of services for theatre-goers who may need larger-type programs because of vision issues,  or hearing amplification. 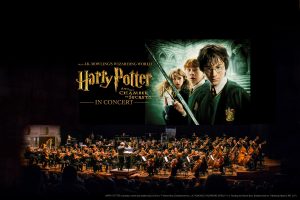 The Hartford Symphony Orchestra will present Harry Potter and the Chamber of Secrets™ in concert at The Bushnell  in Hartford on April 13-14. This is the second concert in the Harry Potter Film Concert Series. The HSO will perform John Williams’ unforgettable score from Harry Potter and the Chamber of Secrets™ while the film plays in high-definition on a 40-foot screen. Tickets go on sale Monday, November 20 at 10AM at TheBushnell Box-Office, via phone at 860-987-5900 or online at www. hartfordsymphony.org.

The Harry Potter Film Concert Series, which is another magical experience from J.K. Rowling’s Wizarding World, kicked off in June 2016 with Harry Potter and the Sorcerer’s Stone and is scheduled to include hundreds of performances across more than 35 countries around the world through 2018.

In Harry Potter and the Chamber of Secrets, cars fly, trees fight back and a mysterious house-elf pays Harry a visit to warn him of what lies ahead this year in the world of wizardry. This year at Hogwarts, spiders talk, letters scold and Harry’s own unsettling ability to speak to snakes causes his friends to doubt him. It’s a year of adventure and danger when bloody writing on a wall announces: “The Chamber of Secrets has been opened.” Saving Hogwarts will require all of Harry’s, Ron’s and Hermione’s magical abilities and courage.

Earning a Grammy nomination for the score, the music composed by John Williams became an instant classic, conjuring beautiful and soaring motifs continuing the adventures of Harry Potter on his magical journey. 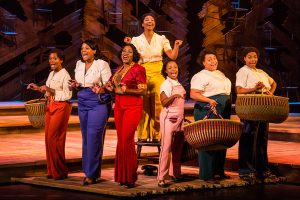 The Color Purple Plays The Bushnell

The Color Purple, whose new production by John Doyle was the hit of the 2016 Broadway season, and winner of the Tony Award for “Best Revival of a Musical” has started its national tour. It visits Hartford’s Bushnell on December 6-10. Adrianna Hicks stars as Celie, the role originally created by Whoopi Goldberg in the film, and by La Chanze and later Cynthia Errivo on Broadway. Darnell Abraham, who won standing ovations nightly as Coalhouse Walker in Barrington Stage’s Ragtime, is also in the cast.

The Color Purple is a musical with a book by Marsha Norman and music and lyrics by Stephen Bray, Brenda Russell, and Allee Willis. Based on the 1982 novel by Alice Walker, the show follows the journey of Celie, an African-American woman in the American South from the early to mid-20th century. The musical premiered in Atlanta, and Oprah Winfrey, who starred in the film, was one its producers who brought the musical to New York. The original Broadway production ran from 2005-2008, earning eleven Tony Award nominations in 2006. The enthusiastically acclaimed Broadway revival opened in late 2015 and ran through earlier this year. It featured Jennifer Hudson in her Broadway debut.

Free Broadway on 34th Street. Several Broadway musical will perform  at the 91st Annual Macy’s Thanksgiving Day Parade, which will be broadcast on NBC November 23 beginning at 9 AM ET. 2017 Best Musical Tony winner Dear Evan Hansen, will perform along with Anastasia, Once On This Island, and SpongeBob SquarePants, The Broadway Musical as well as the Radio City Rockettes.

The Hartford Gay Men’s Chorus performs its annual holiday concert, From Tinseltown to Times Square: A Holiday Adventure on December 8-10, at the Wadsworth Atheneum Museum of Art’s Aetna Theater in Hartford. The concert features songs from an array of beloved holiday films and Broadway smashes, including Home Alone, How the Grinch Stole Christmas, and Elf the Musical. For details:  http://www.hgmc.org.