Billy Cordes, of Westfield, recently competed in the 53rd Head of the Charles Regatta with The College of the Holy Cross varsity rowing team. This year there were 2,271 entries gathering in Boston from all over the globe. The Head of the Charles attracts up to 400,000 attendees and is hailed as the largest regatta in the world.
While admitted to Holy Cross for his academic credentials, Cordes made the team as a walk-on this year.
“Joining a Division I sport, I knew there would be a very high expectation level and it has been exhilarating to be back on a team,” Cordes said. “The weather in the fall makes for a beautiful morning practice as we head to the lake at 6 a.m. to get on the water while there is no wind. As the season progresses, we will still practice six days a week, however, we will move inside to the ergonometer room since the mornings will get too cold. Holy Cross’ fantastic coaches make every day worth its while.” 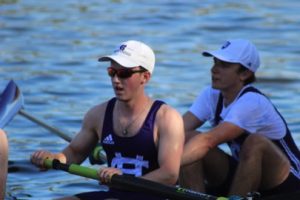 Holy Cross is a founding member of the NCAA Division I Patriot League. The Patriot League is known for placing as much emphasis on academic and leadership success as athletic achievement, and has been recognized as a refreshing approach to collegiate varsity sports. Holy Cross is renowned for its consistently high graduation rates of its student-athletes — among the best in the nation.
A graduate of Suffield Academy in 2016, Cordes was part of the school’s inaugural crew team his junior year. He credits Suffield for developing the program and his coaches, Tom Salamone and Evan Ciecimirski for teaching him the sport.
“Suffield constructed a workout facility to give students the ability to widen their band of interests and allowed for a diverse coed team to be born,” Cordes said. “The rowing tanks and erg machines drastically helped with translation of practice to the water. The practices at Suffield taught me the important lesson of persistence.”
Currently in his sophomore year at Holy Cross, Cordes is an Economics major and is also in the Pre-Dental Program. While in high school, Cordes was a frequent contributing writer for “The Westfield News Student Think Tank.”