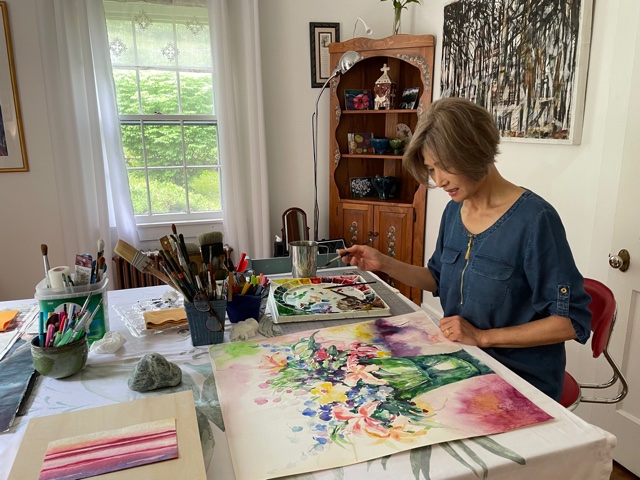 WESTFIELD-Artist Insun Russell is putting the finishing touches on paintings she will be exhibiting when the Jasper Rand Art Gallery reopens Sept. 7 at the Westfield Athenaeum.

“As the director of the Athenaeum I feel that this institution has a unique opportunity to bring high quality art to the Westfield community,” said Guy McLain, executive director. “We are extremely fortunate in Western Massachusetts that there are a number of important artists living in our area.”

McLain said the Athenaeum is “perfectly positioned” to highlight the important work of these artists. 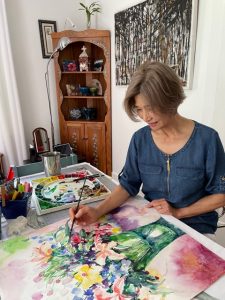 “The Athenaeum has traditionally served as the center of learning and culture in Westfield, and we have a large gallery perfectly designed to show art,” he said, adding the art gallery will function like a commercial gallery.

In a recent interview with Russell in her home atop a picturesque hillside in Russell, she discussed her passion for painting and the gratitude she has for being chosen to lead off the new exhibition series at the Athenaeum.

“The first time I had a show at the Athenaeum was 20 years ago,” said Russell, who has lived in this town for 29 years.

What she enjoys most about the home she shares with her husband Bill is the beauty of nature that surrounds her at every angle.

Her show is titled “Surrounded by the Forest” and will feature watercolors and mixed media in mostly 10×12 and 14×20 scenes,  and all will be available for sale. She also expects to have one or two 18×24 works to display.

The show opens Sept. 7 during regular Athenaeum hours. A wine and cheese gallery reception is slated Sept. 16 from 6-7:30 p.m., allowing area residents to meet Russell, socialize, and view the exhibit.

“The reason that I think this exhibit will be of interest to the community is that Insun has developed a unique style based on her impressions growing up in Korea, learning techniques characteristic of Asian art, and then combining that with her experience living in the United States and absorbing many of the ideas embodied in 20th century Western art,” said McLain, adding, “Artists give us unique ways of seeing the world, and given Insun’s unusual history, she brings a highly original perspective to her art.”

Russell noted she sets aside time every day to paint in her home studio.

“Every two hours I stop and go outside to enjoy the beauty of the day,” she said. 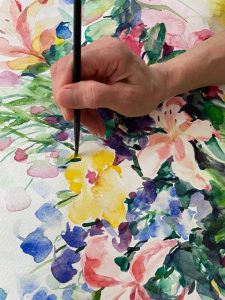 Russell, who was born in Seoul, South Korea, initiated her art studies at Hongik University in Seoul. She met her husband in Seoul while he was serving in the U.S. Air Force there in 1976. The couple married on Nov. 29, 1977. After relocating to the United States, she continued her studies at Santa Monica College and then they chose to make their home in Russell since Bill has family ties to the hill towns. They have one son, Jeremiah, who is married and serves in the United States Army as a helicopter pilot.

“Her thought-provoking work reflects the influences of both Asian culture and Western Modernism, and her art can be found in collections from Los Angeles to Cape Cod,” added McLain.

In addition to Russell’s approximately 15 paintings that will be showcased, she will also display some of her small pottery sculptures that provide her with delight when she creates them. The sculptures will be presented in a glass case within the gallery.

“Since childhood I have seen sea urchins and have drawn inspiration from them in my sculptures,” she said. 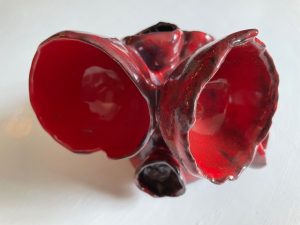 Artist Insun Russell will also display a variety of pottery sculptures during her exhibition titled “Surrounded by the Forest” at the Westfield Athenaeum this fall. (LORI SZEPELAK PHOTO)

During the exhibition which runs from Sept. 7 through October, she will also have a guest book and welcomes feedback from visitors.

“All of my paintings evolve from nature,” said Russell, noting she relishes capturing the beauty of nature she sees from her travels to the ocean as well as stepping outside of her home to view the forest floor in just a few steps.

“I am so grateful to be able to paint and share the figures I see from nature,” she said, adding, “it is a gift that I treasure.”

Russell, a member of ArtsWEST, based in Westfield, also is thankful for her longtime friendship with fellow artist Marie Flahive.

“Marie has always encouraged me since we first met and I consider her a very good friend,” said Russell. 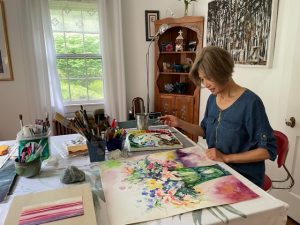 In the coming months, exhibitions also planned include “Highlights of the Westfield Athenaeum Art Collection” from November to January, and “Ruth Kjaer: The Myth of Utopia,” from January into March.

“Over the past century-and-a-half, the Westfield Athenaeum has actively collected landscapes, still-life paintings and portraits by Westfield artists,” said McLain, noting that many of the portraits are some of the city’s leading citizens.

McLain added that Kjaer is recognized as one of the most important artists currently active in the region.

“Over the course of more than 40 years she has created a significant body of work known for its originality and willingness to address issues facing American society in the present era,” he said.

As part of future exhibitions, McLain noted that in addition to receptions, lectures will also be incorporated into the theme of each show.

For more information on the exhibitions and how to submit one’s own work for a future show, visit westath.org or call (413) 568-7833.

“Now that we are again able to open our doors we are dedicated to providing the community an opportunity to see the work of these artists in an environment that allows viewers to truly contemplate and understand the work of these visionaries,” said McLain.