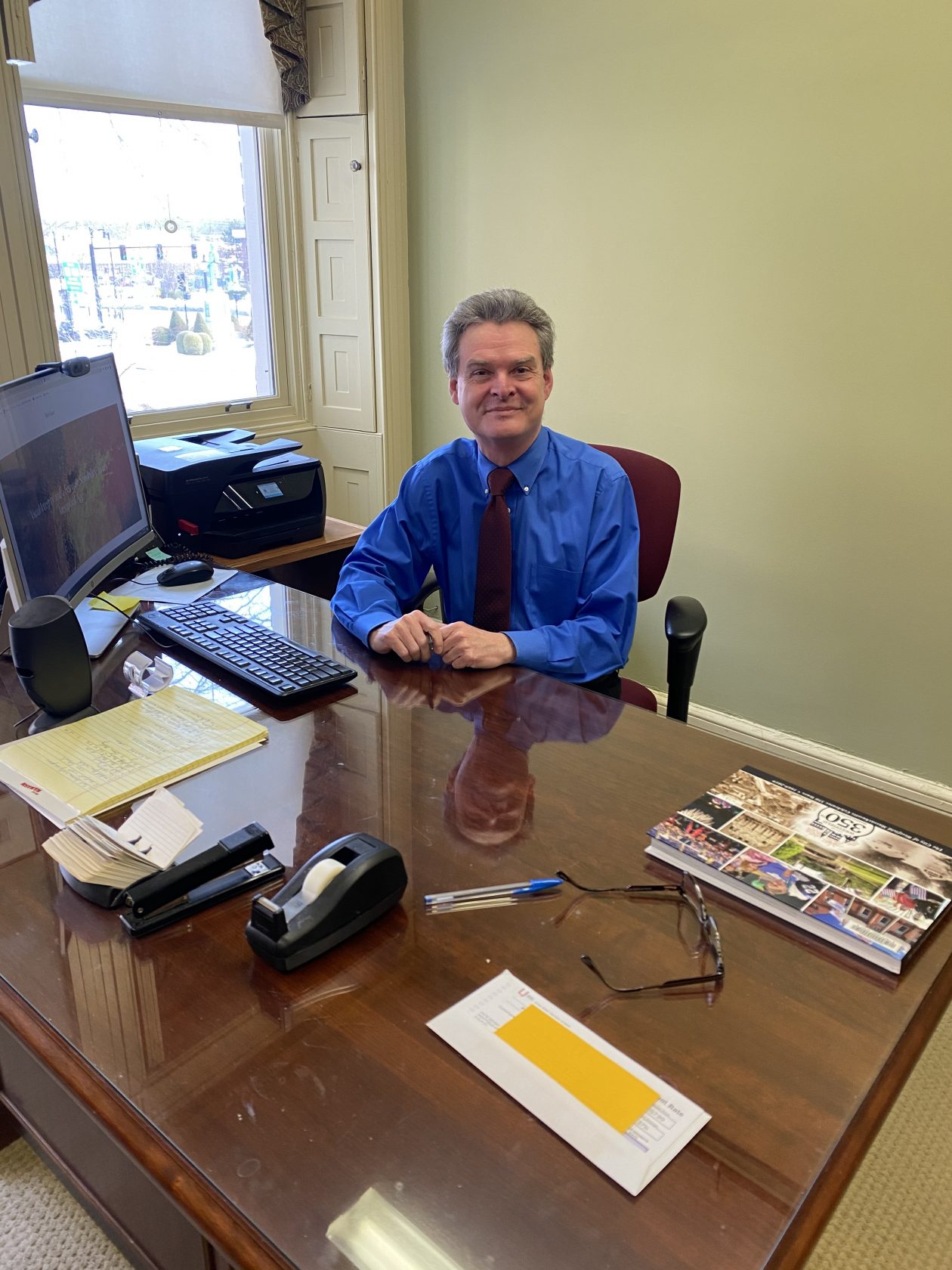 WESTFiELD-Guy McLain is ready to take the Westfield Athenaeum’s long history to a new level as he embarks on a journey of exploring the varied opportunities with the local citizenry that will enhance library services and programming and open up dialogue for creative endeavors for patrons of all ages.

“The Westfield Athenaeum is a very important community resource and I hope to see us really ramp this up with even more library services and programs, as well as collaborate with other organizations in the city to work together on projects,” said McLain, who took the reins as Athenaeum director on Feb. 8. 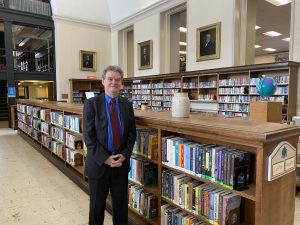 McLain said he is welcome to any and all input from local organizations and associations that wish to collaborate on future endeavors.

“I really want to work with a variety of organizations involved in the arts, history, and business to find ways we can collaborate to have more of an impact,” said McLain. “I encourage organizations to reach out and I invite anyone to call me on how we can work together. Even if we can’t do something immediately, we can look for opportunities and discuss ideas.”

McLain, who resides in Easthampton, first discovered his love for history when he was sent to Germany while serving in the U.S. Army.

“I think my love for history really hit me when I was in the military and as part of the U.S. Army Band,” he said, adding, “One of the first concerts we played was in a small town in Germany celebrating their 800th anniversary in 1977. The band was set up next to an old castle tower that was built around 1200. That was the experience that did it for me.”

McLain said while he spent six years in the Army and three of those years in Germany, traveling around Europe was an “incredible education in itself.”

“As good as my University of Massachusetts undergraduate education was, the experience in Europe was more educational,” he said.

Over the years, McLain has served as director of the Lyman and Merrie Wood Museum of Springfield History, the director of the former Connecticut Valley Historical Museum, and in 2005, designed the flagship exhibits to launch the Wood Museum. He later merged the two museums and expanded holdings to form a premier museum and research facility.

As director of the Wood Museum for more than a decade, he oversaw the library and archives of more than 2 million documents.

McLain’s library experience also includes work as librarian for the Springfield City Library’s Rare Book and Special Collections, where he oversaw the preservation and maintenance of more than 15,000 rare books dating from c.1475 to the 20th century, as well as 50,000 books and sound recordings for the art and music collection.

Additionally, he directed the design of the library and archives for the Houston Holocaust Museum in 1996. As the Curator of Collections, the Research Center, and the Archives, he managed the installation of audio-visual equipment and computers, implemented a collections development policy, established procedures for care, preservation, and rotation of artifacts, set up a volunteer program, a bookstore, and established an oral history program.

“Mr. McLain’s aspirations closely align with ours as he is dedicated to a mission of helping institutions prosper, grow and serve the public more efficiently,” said Susan Drummey, president of the Athenaeum’s board of directors. “This appointment ensures robust leadership continuity on the strategic plan, physical building improvements, community services, programs and staff development.” 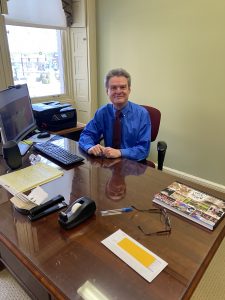 Guy McLain, seen in his office, is the new director of the Westfield Athenaeum. (WESTFIELD ATHENAEUM PHOTO)

McLain said what drew him to the director position was the Westfield Athenaeum’s reputation and “incredible collection.”

“My past career has gone back and forth with libraries and museums,” he said, adding, “The Athenaeum has different resources and I was so attracted to its great collection.”

McLain said one of his priorities once the community reaches a new normal after the COVID-19 pandemic will be to enhance the presence of the art gallery and museum, as well as programming.

“The public library is a very important part of what we do and hopefully after the pandemic we will be able to utilize the other areas more,” he said.

In the past week, McLain has met with individual departments to discuss the impact of COVID-19 and brainstorm ways to offer more high-quality services.

“A big surprise I have seen is that public libraries are taken for granted that people can come in and use it,” he said, adding, “once you lose something you counted on you realize how important it was.”

McLain credited staff members for developing library services that hadn’t been explored in the past – including Library To Go and virtual programs using the Zoom and website platforms.

McLain noted that the Zoom and Facebook programs are also always well attended.

“I think this service has been very valuable,” he said, adding, “So many people are isolated right now and at least there are interactive ways people can participate. I think this type of programming will also continue after we reopen the library since it is a service for people who are also homebound and it may be difficult for them to get out.”

McLain will also be meeting with the board of directors regularly as well as special committees in the coming months.

“The board is very energetic, a great group of people with a lot of knowledge,” he said. “We are an important community resource and will be looking for ways to reopen the building. There are a lot of issues that will require working with the health department and other city agencies to get the building back open. We want to be able to get back open as quickly as possible in a safe way.”

McLain said he is ready “to hit the ground running” on numerous projects that also range from ongoing building modifications to integrating the history museum with library services and programming.

“We have some ambitious projects coming up to improve the building and enhance the services we offer,” he said. “We are also looking forward to art exhibitions again and doing a lot more with the art gallery space.”

McLain said his experience working with artists and on art exhibitions will be an area he is especially excited to explore and expand for the Athenaeum.

“We have a very active arts community locally and regionally and I would like to see an active arts program here once we can safely reopen,” he said.

In McLain’s free time he enjoys writing and public speaking and published a novel this past fall titled “Drawing Without an Eraser.” 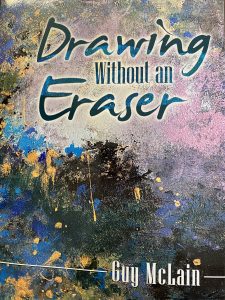 McLain said the novel explores the obstacles artists – and especially women – must overcome in a male dominated art world to be recognized by museums and art experts around the world.

“This novel explores the obstacles through the story of a woman who grew up in rural Texas during the Great Depression,” he said. “Although suffering the trauma of poverty, childhood abuse, and marriage to an unfaithful and domineering husband, she dedicates her life to becoming an artist. But that road proves far from easy.”

As McLain now looks to the Athenaeum’s future – he said the library is perfectly positioned in the years ahead for growth as new collaborations are integrated into the more than 150-year-old institution.

“I think of public libraries as the people’s university,” he said. “Every community has a library and anyone can walk in the door and learn about new things that will enhance their lives.”

As McLain notes he has dedicated his life to that philosophy and looks forward to maximizing the strengths of the Athenaeum to the betterment of the community in the future.