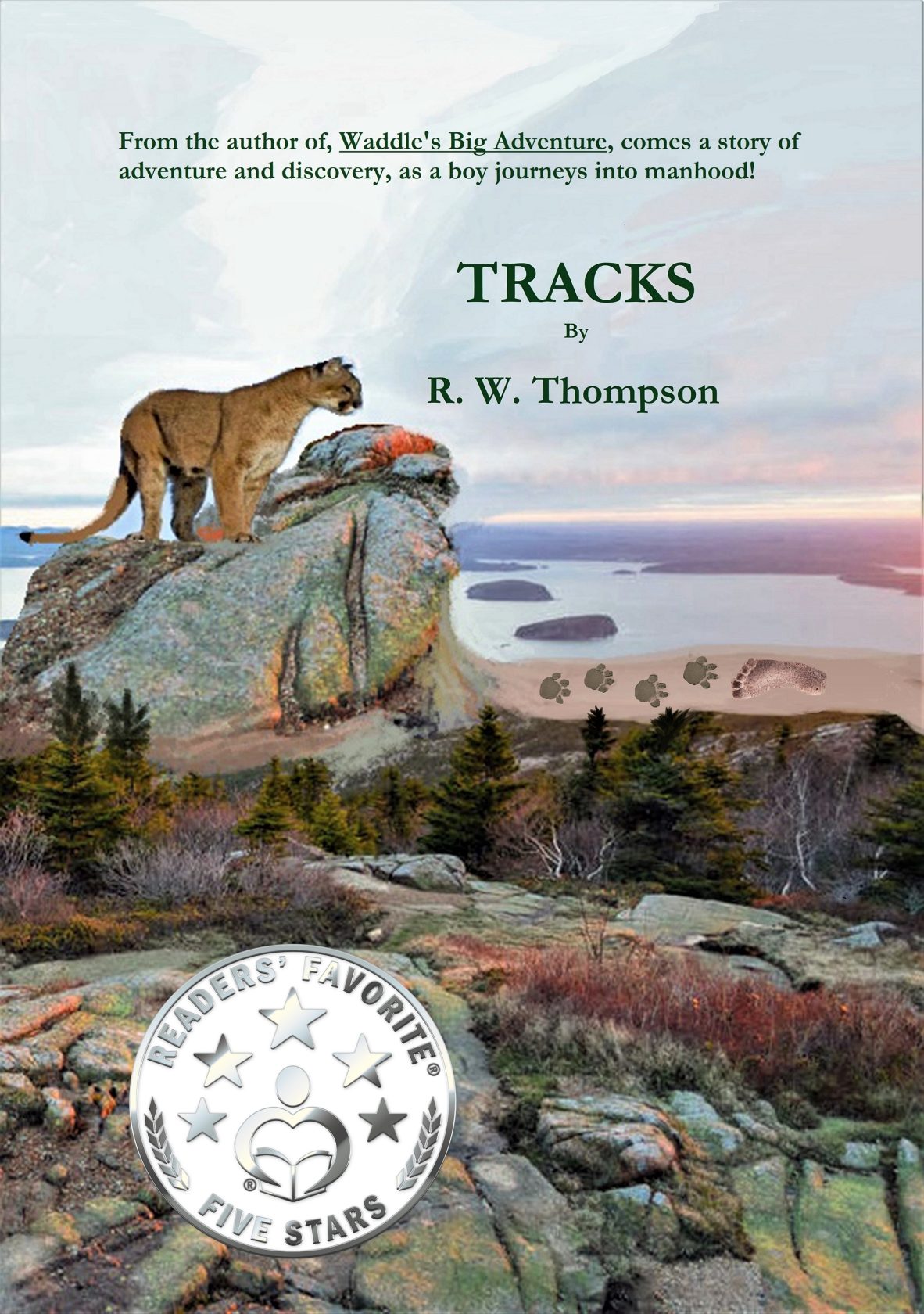 WESTFIELD — A host of WhipCity Wordsmiths will challenge themselves this month as they participate in National Novel Writing Month, or NaNoWriMo.

NaNoWriMo is a 501(c)3 nonprofit organization that provides tools, structure, community and encouragement to help people find their voices, achieve creative goals, and build new worlds, on and off the page. Begun in 1999, NaNoWriMo has a straightforward challenge: Write 50,000 words of a novel during the 30 days of November.

Kelly Buffum and her mother Susan Buffum are founders of the WhipCity Wordsmiths and also plan to participate in this year’s NaNoWriMo challenge. 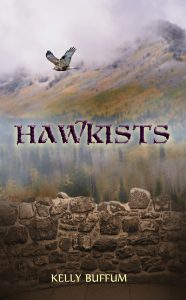 “I am participating again because I need to get something done,” said Kelly Buffum, noting this will be her 10th NaNoWriMo and fifth year as one of the municipal liaisons for the Western Massachusetts region.

Buffum added that outside of the writing challenge, her writing style is “terribly inconsistent.”

“I barely write,” she said, adding, “During NaNo I’ll sit down for a couple hours after dinner and knock out about 2,000 words a day.”

Buffum’s most recent novel, “Hawkists,” can be found on Amazon and at Blue Umbrella Books in the city’s downtown.

“My ideas for my novels occasionally come from dreams,” said Buffum, and said one way she combats writer’s block is to “work on something else for a bit.”

Susan Buffum credits her daughter with introducing her to NaNoWriMo.

“I never wrote a novel until 2012, after Kelly came home from college at Thanksgiving in 2011 talking about NaNoWriMo,” said Susan Buffum. “She said, ‘Mom, next year you have to do this. You have to write a novel.’” 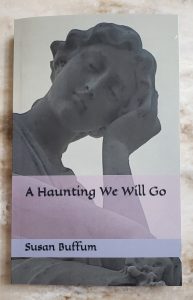 Susan Buffum’s latest offering is “A Haunting We Will Go.” (SUBMITTED PHOTO)

Buffum said she practiced writing a novel around Easter of 2012.

“Until then, I’d only written short stories, novellas and novelettes,” said Buffum. “I sat down Nov. 1, 2012, and began writing my first novel, ‘Talon: An Intimate Familiarity,’ and completed it before the 30th of the month.”

Susan Buffum, who has written 26 novels to date, noted she has written a novel every November since then and will write another this year.

“Ideas just constantly flow through my head,” she said. “I jot them down. Some go nowhere, some get reworked and written as stories, some turn into novels. It’s all internal workings in my own mind.”

Buffum can also experience writer’s block on occasion, and she said she doesn’t panic when that happens.

“I cure it by catching up on reading other authors’ work,” she said, adding, “reading stimulates my creativity and soon I’m writing again.”

“On weekends I spend most of my time writing, only to be aware of the looming 30th day of the month,” she said. “Generally, though, I write the required 50,000 words by day 15 to 18, and write the rest of the novel during the remaining days.”

Buffum said the accelerated pace is not her “normal writing pace,” however, she enjoys the challenge of creating a novel in 30 days.

Buffum just self-published a ghost-supernatural-horror anthology, “A Haunting We Will Go,” that is available on Amazon in print and in the Kindle store as an e-book, as well as at Blue Umbrella Books.

While Jeffrey VanOudenhove will not be participating in NaNoWriMo this year, he still writes 1,000 to 2,000 words on weekdays, and more on the weekends. 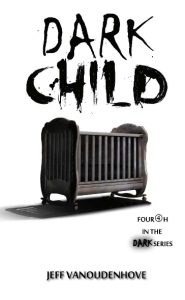 “I try to write every night for about two hours when I get home from work,” said VanOudenhove, who just published “Dark Child,” the fourth book in his Dark Series, based on the ultimate struggle between good and evil, light and dark. The book is available on Amazon in both paperback and Kindle formats.

“It is a psychological piece that deals with mankind being taken over by not only their inner demons, but actual demons, as well,” he said. “Trying to save the humans are the angels who are sworn to protect us, but humanity’s darkness is growing, and because of it, the demons are becoming more powerful.”

The books in the series are “Dark Place,” “Dark Lane,” “Dark Queen” and now “Dark Child.” Book five, “The Final Dark,” is still being written.

“I had always wanted to write a book, since I was in middle school,” said VanOudenhove. “When I got older, I decided to give it a shot and really focus on it.”

VanOudenhove said all of his ideas come from his imagination.

“Sometimes I can be inspired by a sign that I see on my way to work, or a phrase someone says to me,” he said.

Russell Atwood, owner of Blue Umbrella Books, said he started writing detective novels when he was 13, “wanting to be mystery writer Ellery Queen.”

Atwood lived in New York City for 25 years and wrote two private eye novels, “East of A,” and “Losers Live Longer,” based on his experiences.

Atwood said being the owner of the book shop doesn’t allow as much time to write now — besides grant proposals and sidewalk chalkboard signs.

“The shop doesn’t allow me to keep a daily discipline, which is required,” he said.

“I started writing it in November 2019 as part of National Novel Writing Month,” he said.

For Tom Deady, the NaNoWriMo challenge is “extremely motivational.” 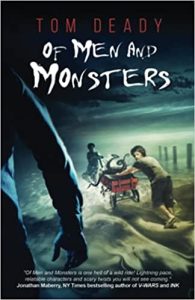 Tom Deady released “Of Men and Monsters” this year. (SUBMITTED)

“I’ve participated for the past seven years, and I think I’ve made the 50,000-word mark three or four times,” said Deady. “I make it a point to post my word count every day, and look forward to seeing my friends do the same.”

Deady explained he has always wanted to write novels. 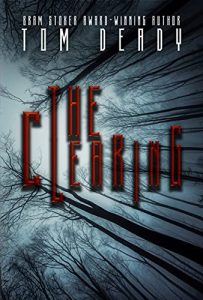 “My first book, ‘Haven,’ took almost 15 years to write,” he said, adding, “that was in fits and starts as I raised two daughters and finished my degree. I wrote the first 50,000 words of my second book, ‘Eternal Darkness,’ during NaNoWriMo.”

Deady said his writing style doesn’t include an outline.

“The ideas I have are usually not even plot-related,” he said. “Sometimes I start with just a single character or a single scene, and just start writing.”

Deady has two releases this year, a novella called “Of Men and Monsters,” and his first young adult novel, called “The Clearing,” the first book in a trilogy. All of his books are available on Amazon.

Robert Thompson, who publishes under the name R.W. Thompson, just finished his first young adult novel this past spring.

“I began my writing career 10 years ago after retiring from a career as a teacher, coach and principal,” said Thompson, adding he began creating children’s picture books and then moved into chapter books for grades 3-6.

“Most of my writing has come from individual experiences in my life, either my own, or experiences in dealing with children and adults during my career as a teacher and K-8 principal,” he said. 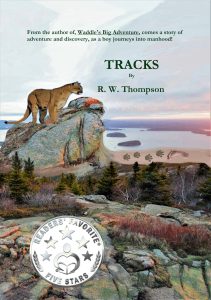 Thompson noted the urge to complete a novel “was always there.”

“I started an outline for what was supposed to be another chapter book, but found that my main characters were more complex, and other secondary characters started showing up, as well,” he said. “Consequently, I decided to try and change it to a bit more complicated story, and it worked out.”

The young adult novel, “Tracks,” is the story of a boy’s journey into manhood, and received a Five Star Silver Seal award from Readers’ Favorites, and is available at Blue Umbrella Books as well as Amazon and at barnesandnoble.com.

Thompson said due to a difficult schedule that does not provide for a set writing period, he will be unable to participate in NaNoWriMo this year.

“I am working on a second novel, but am not sure of a publishing date,” he said. “I try to write several times a week, but do not have a set number of words I try to complete. I usually just write until I’m tired, or must be somewhere.”

While Thompson admits that writer’s block has happened to him on occasion, he has ways to combat it.

“I have found discussion with other writers in the WhipCity writers group has helped,” he said, adding, “I sometimes turn to my hobby of oil painting and have found that the creative process there often helps to reset that writing frame of mind.”

For more information about the WhipCity Wordsmiths, send an email to [email protected]

For individuals interested in challenging themselves by writing a novel in November, details can be found on NaNoWriMo at nanowrimo.org.