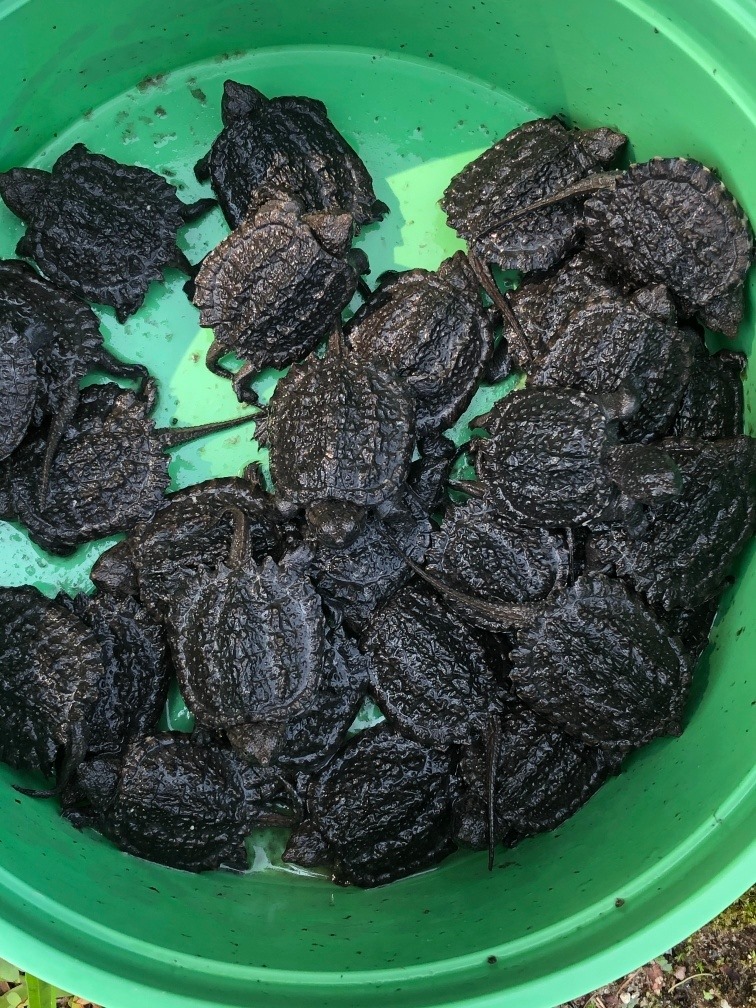 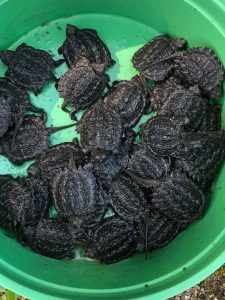 Twenty-nine baby snapping turtles were released at an undisclosed location in Southwick near where their mother had been run over by a car. (PHOTO SUBMITTED BY LIZ BENNETT)

SOUTHWICK — What started as a road-kill rescue turned into a wildlife conservation effort for Southwick and one of the oldest animal species on the planet.

Animal Control Officer Liz Bennett received what she had thought was a standard road-kill call early this summer. A large snapping turtle had been run over by a car but was still alive. Bennett said part of the turtle’s shell had been crushed, so she brought it to Tufts Wildlife Clinic in North Grafton.

Several days later, Bennett called the clinic to follow up and see if the turtle may have survived. Unfortunately, she said, it had died from the damage done to its shell. There was some positive news, however: The turtle was a female, and had been carrying more than two dozen eggs. The Tufts clinic was able to save 29 of them.

The mother snapping turtle had likely been crossing the road to find a suitable location to lay the eggs early in the summer. Bennett said they can travel up to half a mile to find a nesting location.

Though the eggs did not reach their intended destination, there was still hope for them. The Tufts clinic put them in an incubator, where they sat for about three months, waiting to hatch. Bennett finally got word this month that all 29 baby turtles had hatched.

With a little hesitation, she went back to North Grafton to pick up the babies, and brought them back to a body of water near where their mother had been struck.

Bennett said that she cannot reveal exactly where she released the turtles, out of fear that people may seek them out and endanger them. Even without humans trying to catch them, they already face long odds in the wild.

“Most of them will probably not survive because of predators,” said Bennett.

At least some of the 29 babies likely will survive, though, and Bennett said she hopes to see them reach at least the same age as their mother, who she estimates was between 35 and 40 years old, and was approximately the size of a basketball hoop.

The effects of time and evolution often leave animal species looking far different than their ancient ancestors. For the snapping turtles Bennett released back into the wild, however, scientists believe they are largely unchanged from their forms millions of years ago.

“You have to respect that they survived this long,” said Bennett.

Bennett thinks that she encountered the same mother turtle last year, when it stubbornly stayed under somebody’s parked car, making the driver afraid to get near it.

“I knew it was her, because few make it to that age,” said Bennett.

Turtles are a seemingly rare form of road-kill, as they only seem to cross over roadways at certain times of year when they are transporting their eggs. Bennett urges people to keep an eye out when driving near swamps, sandy areas, or waterways.