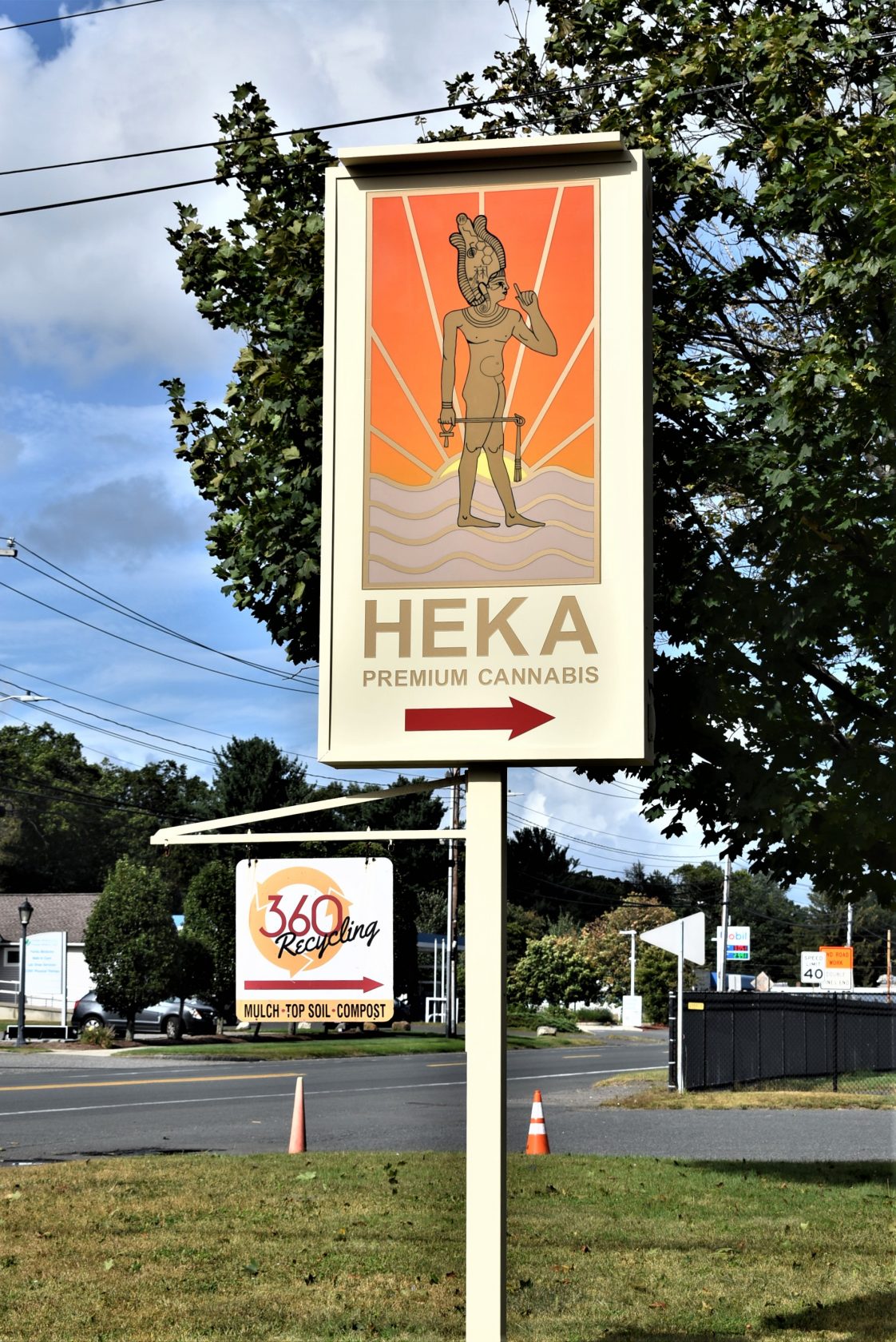 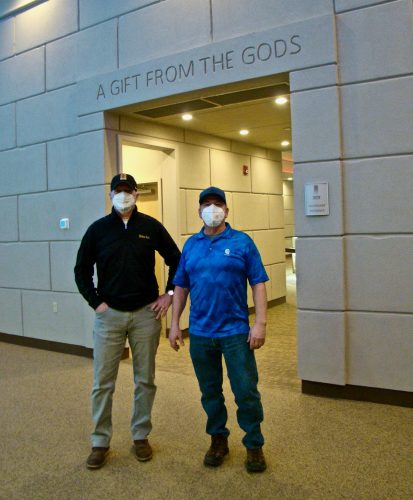 Jack Murphy, director of retail operations, and Mark A. Dupuis, director and president of Heka Inc., stand in front of interior doorway to the dispensary, under the slogan “A Gift from the Gods.” (AMY PORTER/THE WESTFIELD NEWS)

WESTFIELD — Marijuana prescription patients and recreational users will get their “Gift from the Gods” this Friday.

Jack Murphy, Heka’s director of retail sales, said the dispensary will be fully stocked in every category at its opening, offering the best products from throughout Massachusetts. Murphy said Heka has tried to keep its products as local as possible.

“People want their products in our dispensary,” Murphy said. “They think it’s definitely different, it has more case space to show off packaging, and 32 points-of-purchase cash registers.”

Meanwhile, 1,500 plants are currently growing in the cultivation portion of the facility. Mark A. Dupuis, president and CEO of Heka, said the company is five weeks into cultivation and will begin adding their own products for sale at the beginning of January, ramping up to 18,000 plants and 45 different strains at full production, when they expect to sell 200 pounds a week and 10,000 pounds a year. He said the dispensary occupies 6,300 square feet, and the whole facility is 42,000 square feet. 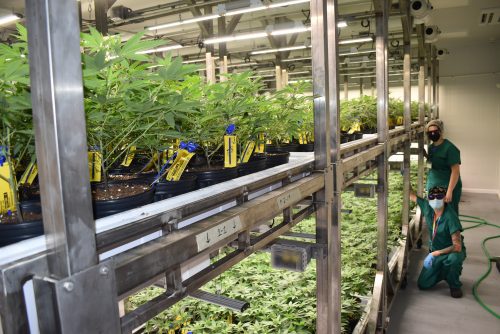 A clone room in Heka’s cultivation area. These plants will be moved shortly to a larger grow room. (AMY PORTER/THE WESTFIELD NEWS)

Dupuis said over the next two months, Heka will hire 25 or 30 more employees for the dispensary, and another 10 for cultivation, and will have a total of 75 to 100 employees at full capacity. To date, everyone they’ve hired has had two to five years of experience in the cannabis industry, he said, and have a solid background on products in Massachusetts.

Heka initially received a license to sell medical marijuana in 2015, before a 2016 referendum changed the state’s laws to allow recreational marijuana sales. Dupuis then converted Heka from a nonprofit to a for-profit company, and changed his business plan to incorporate recreational marijuana products. Medical use remains an important focus for their business, however. Dupuis said he expects sales of medical marijuana to be 20 percent of the business, and the medical items will be offered at a lower cost than recreational products. A pre-order and curbside business is also planned for the site. 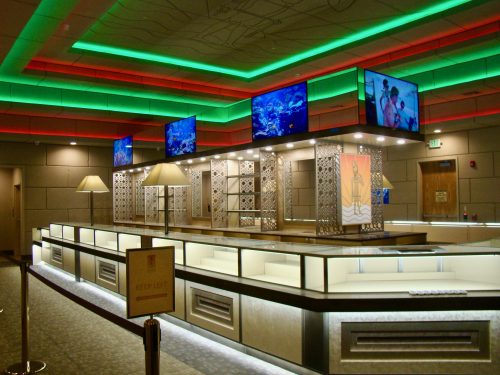 The dispensary has lights that change color according to the occasion will go live on Oct. 1. (AMY PORTER/THE WESTFIELD NEWS)

“Here at Heka, we look to offer an experience like no other to patients and customers alike. We aim to be not just your typical pot shop, but a dispensary that provides a full experience to every person who walks through our door,” Murphy said, adding Heka will accommodate customers who already know what they want, those looking for more guidance about products and proper dosing, and the full service experience for somebody who wants to trade information with a like-minded person. “Let our knowledgeable, friendly and caring team of dispensary agents guide you on a journey with cannabis towards better health and quality of life,” Murphy said. 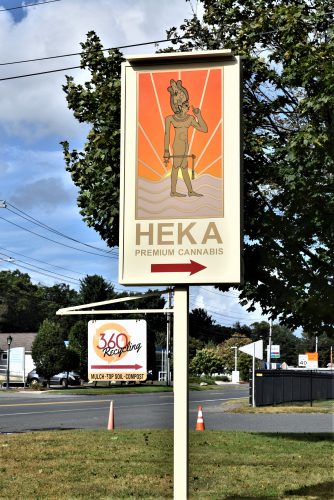 The sign at the corner of Sgt. T.M. Dion Way and Southampton Road will sport a Grand Opening ribbon this week. (AMY PORTER/THE WESTFIELD NEWS)

Dupuis said throughout their journey to opening Heka, they have already invested $17 million in cash into the business. He said beginning with its grand opening on Friday, Heka expects to have 500 to 1,000 customers a day, and will arrange for a police detail every day on Southampton Road, beginning half an hour before opening to half an hour after closing.

Dupuis said Friday that he plans to put a Grand Opening ribbon on the sign at the corner of Southampton Road and Sgt. T.M. Dion Way in the next few days.