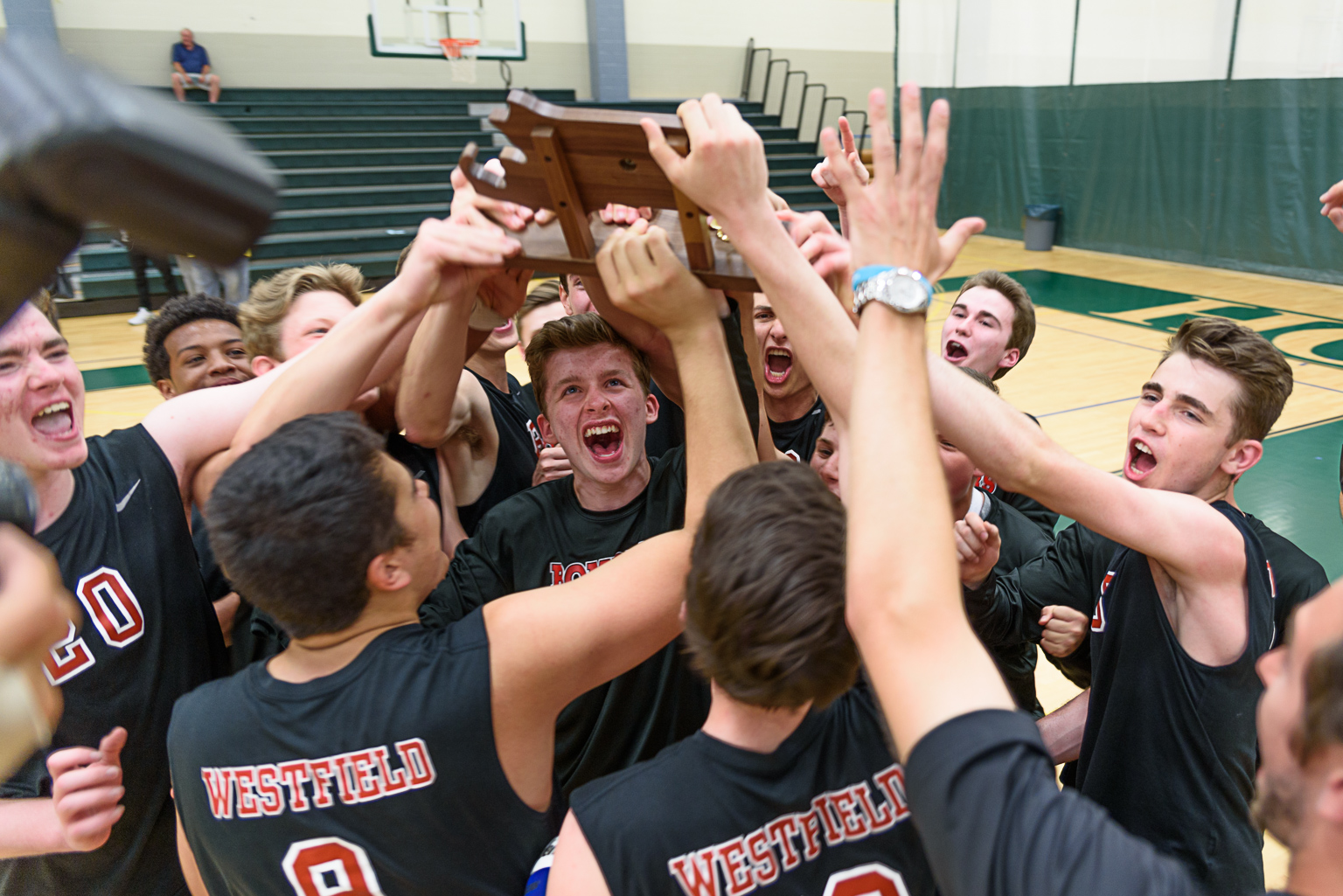 HOLYOKE – The names may have changed, but the results are the same.
The defending Western Massachusetts Division 1 high school boys’ volleyball champion Westfield Bombers, led by an entirely new cast of players donning the black, red, and white uniforms, have gone back-to-back.
No. 1 Westfield outlasted third-seeded Central in a D1 West Sectional finals thriller, 28-26, 25-23, 19-25, 35-21 Monday night at Holyoke Community College. It was the second straight championship win for the Bombers (18-3), who soundly swept the Chicopee Comp Colts 3-0 a year ago in the big game. 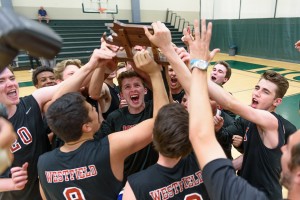 “Two is nice,” Westfield coach Tyler Wingate said. ““You never know how the season is going to play out. We had an entirely new team from last year so a lot of guys had to step up, and they certainly did. I think there were definitely some growing pains during this match. This is not an easy spot, but they really made the plays when it counted. Central was a heck of an opponent. They really showed up and were ready to play.”
The opening minutes of the championship match hinted at an evenly matched contest.
The first set could not have been closer with 17 ties, and four lead changes. Westfield enjoyed the largest lead (three points) midway through the game before pulling out a two-point victory.
In the second set, Westfield led throughout and managed another narrow win.
The 2-0 lead though, appeared to wake up a sleeping giant. Central, which rolled into the tournament with just one loss, surged to a six-point win in the third set.
In the fourth set, the teams jockeyed for the lead. After 11 ties and four lead changes, Westfield settled down, settled in, and took care of business.
“It was a big challenge … but we stuck together and pulled through,” said Westfield’s Noah Kappel, who finished with 20 kills and four blocks.
Westfield’s Tyler Stanton agreed.
“It’s just amazing that we can come back again two years in a row, and just to be playing this well with a different variety of a team because we lost all of our starting seven from last year ,” Stanton said. “To have a variety of players and have the work ethic to get in to Western Mass is amazing.”
Stanton finished with 21 digs.
Igor Belokopytov (15 kills, 11 digs, one ace), Ryan Murray (six kills, two blocks), Eddie Loboda (10 kills, eight digs), Shane Kiendzior (7 kills, 5 digs), Scott Walsh (50 assists, eight digs), and Andrew Burrage (one ace, 15 digs) also helped fuel a repeat championship.