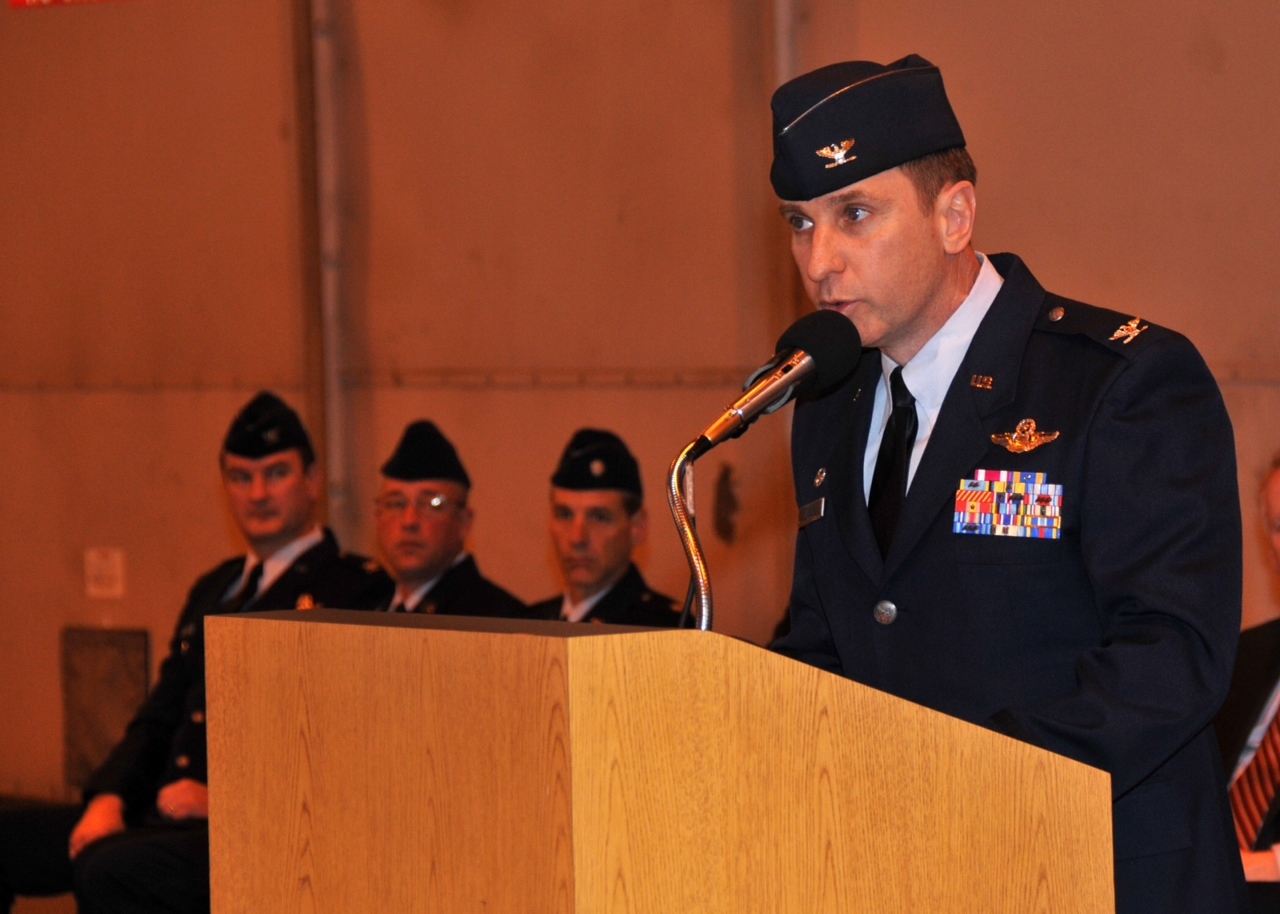 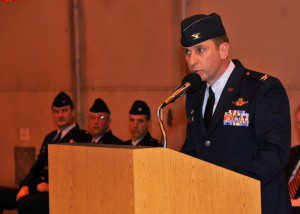 Col. James Keefe addresses the troops after assuming command from Brig. Gen. Robert Brooks during a change of command ceremony. Col. Keefe spoke of the future goals and challenges of the unit. (Photo submitted)

WESTFIELD – The 104th Fighter Wing (104th FW) hosted a change of command and awards ceremony on Saturday at Barnes Air National Guard Base. Col. James J. Keefe accepted command of the fighter wing from Brig. Gen. Robert T. Brooks, Jr.
Brooks was recently promoted to Brigadier General and assigned to the Joint Force Headquarters as the Assistant Adjutant for Air.  On Saturday, Col. Keefe became the 15th Wing Commander of the 104th, after previously serving as the 104th FW Vice Wing Commander.  At the event, Brig. Gen. Brooks was presented the prestigious Legion of Merit award for his exceptionally meritorious military service.
Keefe, a decorated fighter pilot, is a recent graduate of the Naval War College in Newport, R.I. and during his military career has served in many leadership positions including as the 131st Fighter Squadron commander where he flew the A-10 aircraft.
“I am honored to serve as the new wing commander,” said Keefe.  “Brig. Gen. Brooks has entrusted in me a very talented and capable wing, with a long-history of providing outstanding contributions to the nation and the community here in Western Massachusetts.”
Maj. Gen L. Scott Rice, the Adjutant General of the Massachusetts National Guard, lauded the efforts of the 104th Airmen.
“We have 89 Air Guard wings across the U.S., and the reputation of this wing across the Air National Guard, National Guard and Air Force is not great, it is not excellent, it is exceptional,” said Rice.  “I see a great future in each of you as you embrace this mission – it’s your innovation that will bring everything together. We have the right people, in the right place, at the right time to meet the challenges ahead,” he said.
Maj. Gen. Rice also commented on the trying times facing the U.S. military.
“We have enemies in our future, like sequestration.  It will come fast and furious at us, but there is no better unit to absorb these challenges then the men and women of the 104th FW,” said Rice. 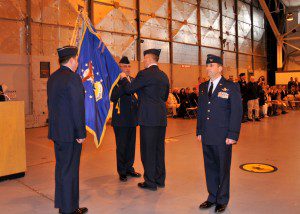 During a change of command ceremony, Brig. Gen. Robert Brooks accepts the flag from Command Chief Todd Fappiano of the 104th Fighter Wing. Change of command ceremonies signify the change of leadership roles within the unit. Brig. Gen. Robert Brooks, the prior commander, will assume position as the Assistant Adjutant General for Air. (Photo submitted)

Brig. Gen. Brooks was proud to address the unit he commanded for five years.
“You are all steadfast and great Americans and I am thankful for your efforts.  My hat is off to you and I know that my recent promotion was due to your blood, sweat and tears.  You embody the formula for success; good enough is not what the team needs.  If you can handle the pain of discipline, you’ll never have to feel the pain of disappointment,” he said.
Brig. Gen. Gary Keefe, the Adjutant General for Air, reflected on the fact that the Keefe family has proudly been a part of the Massachusetts National Guard since 1956.  In his remarks to the Airmen of the 104th FW, he commended his younger brother.
“Jim is the right person for the job, we need creative, strategic thinkers right now more than ever,” Brig. Gen. Keefe said.
The event also featured three additional changes of command and an awards presentation.  Maj. Michael Dibrindisi received a Meritorious Service Medal and assumed command of the 104th Maintenance Squadron from Lt. Col. Christian Bigelow who has been appointed the Deputy Maintenance Group Commander.  Lt. Col. Jeffry Blake received a Meritorious Service Medal and accepted command of the 131st Fighter Squadron from Lt. Col. Alex Haldopoulos, who also received a Meritorious Service Medal.  Lt. Col. Haldopoulos assumed command of the 104th Operations Group from Col. Kenneth Lambrich, who was selected as the new 104th FW Vice Wing Commander.