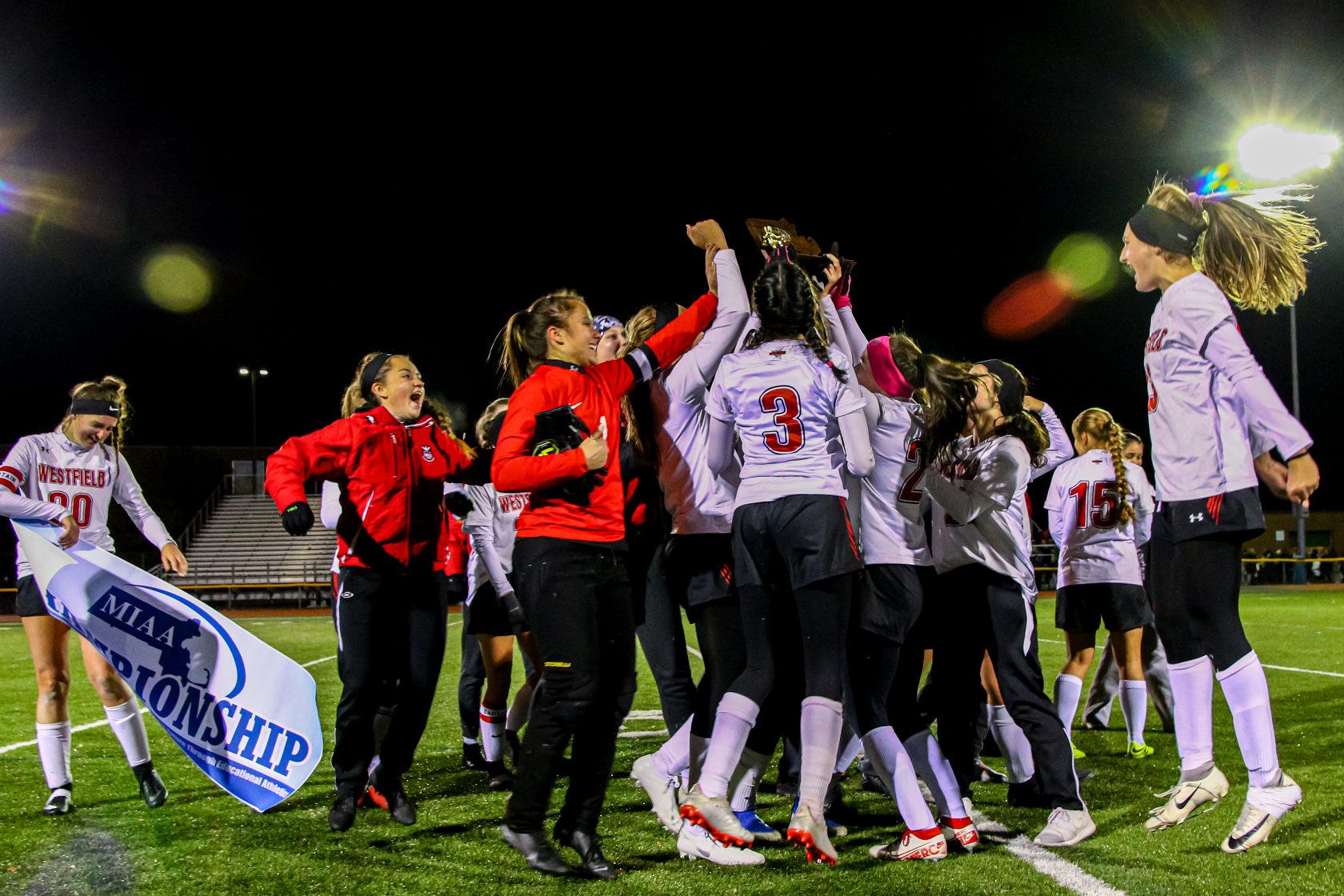 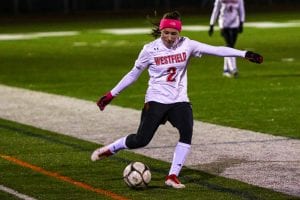 SPRINGFIELD – Bean there, done that.
Westfield junior forward Catie Bean stepped in front of a pass around her team’s own 30-yard line, motored down the right sideline with a defender working hard to stay stride-for-stride, kicked the ball ahead to herself, dribbled deep toward the end line and angled a low kick into the opposite side corner of the net for the game’s only goal with 6:55 remaining in regulation to lead No. 2 Westfield past top-seeded Minnechaug 1-0 in the West Division 1 girls soccer championship Saturday night at Central High School’s Berte Field.
“My coach is like ‘you’re faster than everyone’ so (I) passed it by her, ran and hit it,” Bean said. “I knew if I passed it around her because no one was coming, I just shot it, hopefully it would go in and it did.”
Bean’s game-winning shot drew praise from Westfield girls soccer head coach Keith Saltmarsh.
“With her pace, she’s very dangerous,” coach Saltmarsh said. “Everybody kind of focuses on Chandler (Pedolzky) quite a bit, and Kaela (Mochak) and Catie are a little bit left alone. Catie took her speed to them, and buried it into the back of the net. …For her to bury that was just huge for us.”
It was a big play in the game at the time. Although Westfield (16-2-2) dictated the pace of play somewhat throughout the first half, momentum appeared to favor Minnechaug (17-2) in the final 40 minutes. 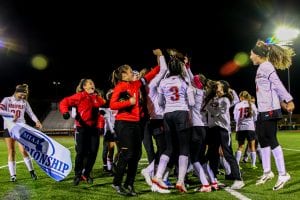 In the first half, Pedolzky nearly squeezed off a shot in between two to three defenders similar to the one that resulted in a goal in the semis, but came away empty this time. A direct kick from Pedolzky just seconds later sailed high above the crossbar.
Minnechaug took control of the ball a bit more in the second half.
In the 52nd minute, Minnechaug’s Isabelle Fergus smacked the crossbar with a hard hit ball. The Falcons had a couple more cracks at it as a scrum ensued deep in the box. The Westfield defense defended well, and Bombers goalie Adrianna Arona put an end to the series of shots with a save.
In the 59th minute, Emily Howard had a shot blocked. The ball bounced back out to Gabrielle Williams, whose rebound attempt sailed high.
In the 65th minute, Minnechaug launched a corner kick and a header, but Arona came up with another save.
Minnechaug nearly scored just moments later as the ball got behind Arona on a shot, and slowly trickled toward the net. Westfield’s Ellen Jury zipped in to kick away the ball though.
Minnechaug put together another strong offensive push before Bean made her run to glory. In the closing minutes, the Falcons made an all-out effort with a barrage of shots, including two corner kicks and strong follow-up efforts.
“She made one huge save after another and really kept us in the game,”
“Those huge saves,” coach Saltmarsh said of Arona. “To really work off her backs and understand where she had to come out and be big. She did a great job cutting down the angles and didn’t give them anything.”
Westfield advances to take on Central champ Algonquin (17-1-3) in the D1 state semifinals Tuesday at Berte Field (Central HS) at 5 p.m. 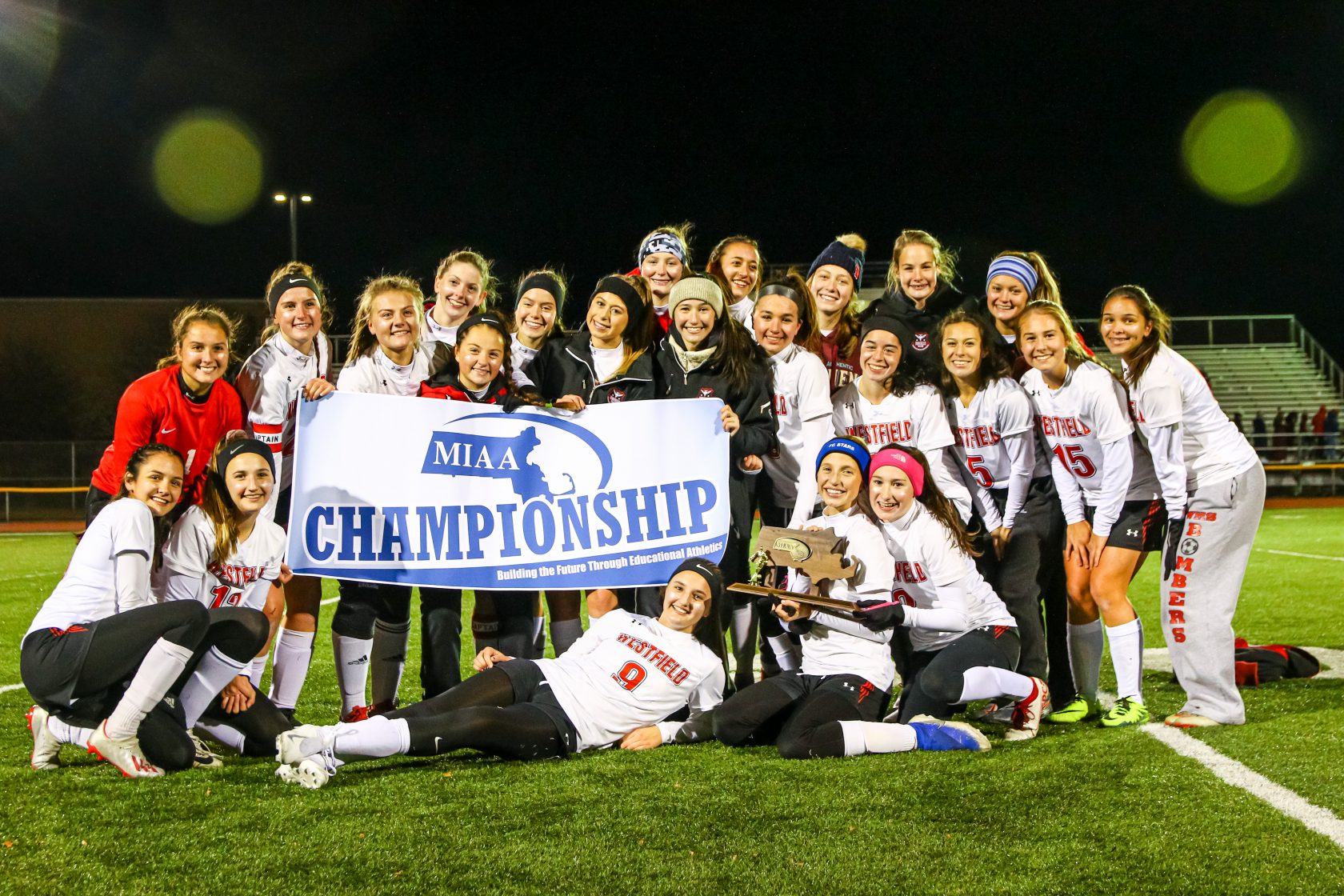