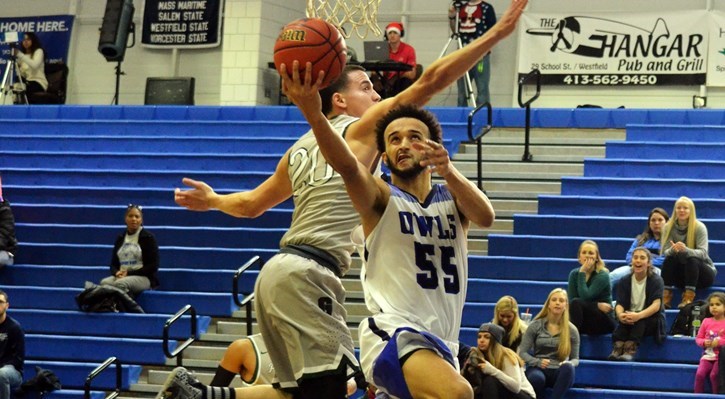 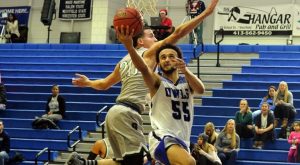 Junior forward Marcus Collins (Cambridge, Mass.) paced Westfield State with a game-high 16 points on 7 of 10 shooting to go along with six rebounds and three steals. Sophomore guard Moody Bey (Springfield, Mass.) added 15 points for the Owls, while sophomore forward Anthony Reynolds (Springfield, Mass.) posted a double-double with 13 points and a game-high 11 boards (eight offensive) and junior guard Peter Mafo (Lynn, Mass.) filled the stat sheet with 11 points, five rebounds and a game-high seven assists
Despite shooting just 39% (10-26) from the floor in the first half, the Bears led 29-26 at the break. DeAndrade led all players with nine first-half points as he went 3-for-5 from behind the arc, while St. Louis added seven points. Collins paced the Owls with eight points in the opening stanza. Westfield shot 42% (11-26) over the first 20 minutes.
A quick 7-2 run to open the second half capped off by a DeAndrade traditional three-point play extended the Bears’ lead to 36-28. Later in the period, Carney helped increase the BSU advantage to 11 (49-38) as he scored nine points in a span of 69 seconds on a pair of three-pointers and a traditional three-point play. Junior guard Bo Garcia (Highland, N.Y.) banked home a shot clock beating three-pointer with 8:44 remaining to give Bridgewater its biggest lead of the game, 53-40. After a Westfield basket, Carney drove to the hoop for a layup to make it 55-42 with 8:44 showing on the scoreboard.
The Owls soared over the next five minutes outscoring the Bears 15-5 to cut the deficit to three, 60-57, with 3:26 left to play. Bey scored seven points during that stretch.
A pair of Carty free throws were answered by two from Mafo. Following a stop, Westfield had a chance to either tie the game or cut it to one, but turned the ball over. St. Louis came up with a big putback off his own missed shot and Carty drained two more free throws to make it a seven-point game (64-59) with 1:29 remaining. Collins made things interesting as he converted a three-point play to pull the Owls to within four, 66-62. Westfield then came up with another big defensive stop but couldn’t take advantage as the Owls turned the ball over again. The Bears would make 4 of 6 free throws in the final 28 seconds to secure the 70-64 victory.
Bridgewater bounced back from a rocky first half to shoot 59% (13-22) in the final stanza. The Bears went 9-for-21 (43%) from three-point range for the game and converted 15 of 20 (75%) free throws.
Westfield shot 43% (26-61) on the afternoon, but finished just 2-for-13 (15%) from behind the arc.
Prior to the game, the Bears honored seniors DeAndrade, Carty and Mike Wiederkehr (Bremgarten, Switzerland).
The MASCAC schedule continues for both teams on Wednesday evening. The Bears entertain the Vikings of Salem State University at 7:30, while the Owls travel to Framingham State University for an eight o’clock game with the Rams. – Courtesy of Westfield State University Sports