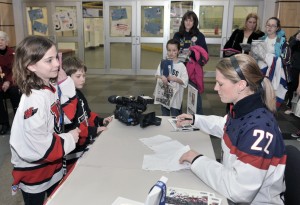 WESTFIELD – The last image many viewers have of two-time Olympic women’s hockey silver medalist Kacey Bellamy and several of her teammates were flowing tears and disappointment.
Team USA, on the verge of a breakthrough against their archrival, had just blown a late lead against Canada in the gold medal game, eventually losing in overtime in front of a packed house in Sochi, Russia.
Joy quickly turned to sadness, that is, until, Bellamy returned to her hometown Wednesday, reuniting with family, friends, and the public. The local Olympian spent the day visiting city schools before wrapping up her city-wide tour with a “Welcome Home” ceremony and autograph session at Amelia Park Ice Arena.
“It’s been an amazing experience,” Bellamy told The Westfield News. “Talking to kids puts things in perspective. I realized it’s not about the medal, but the journey.”
Bellamy actually began her journey in the city’s youth organization several years ago before advancing to Berkshire School in Sheffield, continuing on to the University of New Hampshire, and eventually Team USA and the Canadian Women’s Hockey League’s Boston Blades.
“The support from my family, friends, and fans has been bigger than anything,” Bellamy said.
One young supporter voiced her enthusiasm after posing with the star player.
“This is awesome,” said nine-year-old Elyse Eidinger, draped in her Westfield Youth Hockey Squirt jersey. “I’ve never met an Olympian before. I wanted to meet her.” 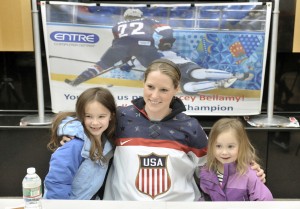 Westfield’s Kacey Bellamy, center, poses for a photo with Giada and Elise Musa of Southampton, during a homecoming celebration for the two time silver Olympian at the Amelia Park Ice Arena last night. (Photo by Frederick Gore)

It is obvious the profound impact Bellamy has had on the Whip City.
From young hockey players rising up through the ranks of the city’s youth organization to a group of Westfield High School female ice hockey players (playing for Cathedral), who have drawn inspiration from the Olympian, to all of Bellamy’s supporters, the sport, locally, appears to have gotten a boost from Kacey, herself.
One family member stepped in to correct that assumption.
“Hockey in the city is not just better for Kacey – but because of the whole family,” said Kacey’s father, Bobby.
That statement rings true in more ways than one as brother, Corey, helped the Westfield Bombers capture a championship title in 2008. Corey recently joined Kacey’s older brother, Rob, on the Elmira (N.Y.) Jackals of the East Coast Hockey League, an affiliate of the Ottawa Senators.
As far as the future is concerned, Kacey predicted one more run at an Olympic gold medal in 2018. She also said she will attempt to try to land a Division 1 coaching job in the very near future, and continue to play for the Blades.
The Bellamys have also run hockey camps at Amelia Park. Another camp is in the works this year.