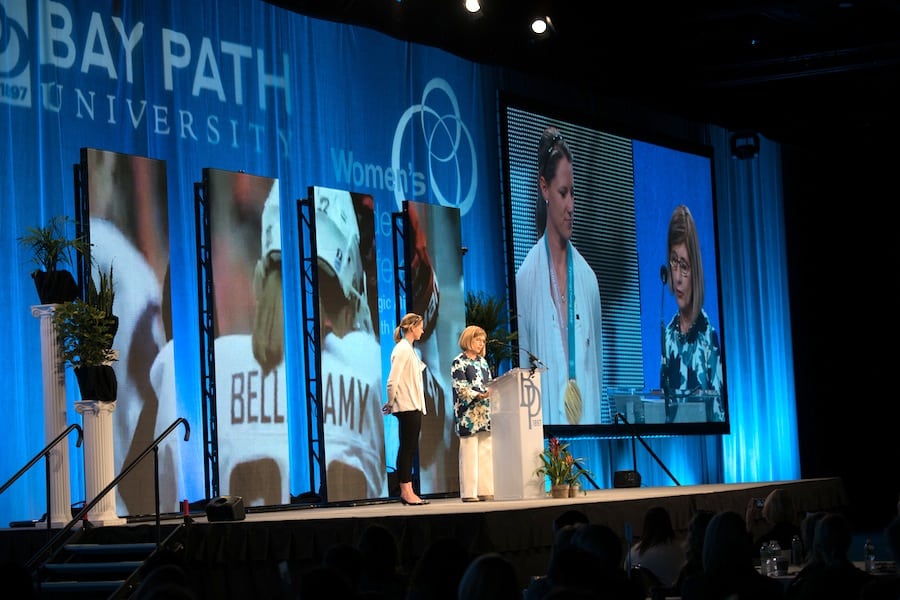 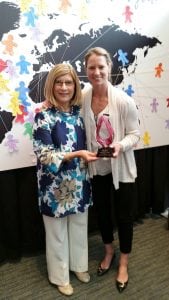 SPRINGFIELD – In acknowledgement of Kacey Bellamy’s extraordinary achievements on the ice, and her most recent gold medal as a member of the 2018 U.S. Women’s Olympic Hockey Team, Bay Path University recognized Kacey Bellamy with the Bold Woman Award. The Award was given at the annual Women’s Leadership Conference, “Be Curious,” as part of the morning welcome on Friday at the MassMutual Center in Springfield.
Bay Path University’s Bold Woman Award is bestowed on women who have dedicated their lives to being bold, taking risks, striving to achieve their goals with dignity and passion, and who exemplify the very best attributes of being a bold woman. 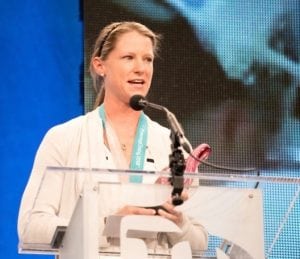 “It is an absolute honor to receive the Bold Woman Award. To be here with these strong, powerful women is indescribable. It makes me realize that what we are in life is something bigger than ourselves,” said Bellamy. “I am also thrilled to be a role model for young women and men, and to encourage them to believe that can do anything they set their mind to. Thank you again to Bay Path; I am so proud my roots are in Western Massachusetts.”
Bellamy, who plays defense, has been a member of eight U.S. National Hockey Teams, earning seven gold medals and one silver. In 2016, she was on the roster with the Boston Pride of the National Women’s Hockey League, and helped them win the first-ever Isobel Cup for women’s professional hockey. She is also a three-time Olympic medalist, winning silver in Vancouver and Sochi, and, most recently, gold at the PyeongChang 2018 Winter Games.
“Kacey Bellamy is a shining example of a student-Olympic athlete who has balanced her passion for hockey with a dedication to learning,” said Bay Path President Carol Leary. “Her accomplishments on the ice represents for women, young and old, and around the world, what is possible with persistence, hard work, and dedication.”
Bellamy is a 2009 graduate of the University of New Hampshire, majoring in women’s studies. – Courtesy of Bay Path University