WESTFIELD-“It’s time” noted Stanley Park Managing Director Robert McKean of restoration work needed on the Carillon Tower that has stood tall in the Rose Garden for more than 70 years.

“The years have taken its toll on the structure and a much-needed restoration is being planned,” said McKean.

McKean noted the Carillon Tower is the “centerpiece” of Stanley Park and is a well-known landmark for the city. 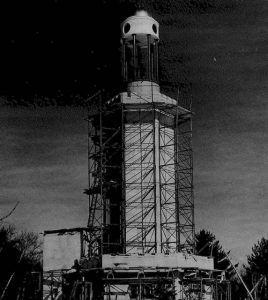 A year following the opening of Stanley Park, a predominant landmark, the Carillon Tower, was constructed. A Stanley Park photo shows the construction of the tower. (STANLEY PARK PHOTO)

“It was envisioned by our founder, Frank Stanley Beveridge, and was built and dedicated in June, 1950,” said McKean.

The official dedication program took place June 4, 1950 and Beveridge, founder and president of Stanley Home Products, Inc., noted the establishment of the park was the fulfillment of a dream long anticipated. 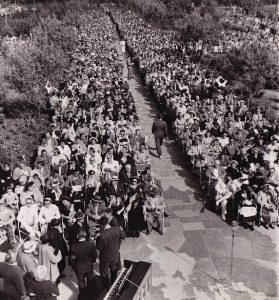 Hundreds attended the dedication of the Carillon Tower at Stanley Park on June 4, 1950. (STANLEY PARK PHOTO)

“The bells in this tower will send forth a message of tranquility in the universal language of music, a language that is understood by all races and creeds,” Beveridge noted in remarks. “This thought was the inspiration behind the dedication of the tower in the interest of peace and understanding of the peoples of the world.”

Beveridge went on to thank the generous contributions of friends and associates of Stanley – from sales organization and field executives, to home office executives, associates in the manufacturing plants and distribution stations, as well as the public – that allowed the Carillon Tower to be built.

As another anniversary of the tower’s dedication is fast approaching, a special online auction to raise funds is being planned for the week of Sept. 12-18.

“This year’s annual fundraising event, ‘Carry On the Carillon: There’s Music in the Air,’ is being planned to generate funds for the restoration of the Carillon Tower,” said McKean.

McKean said as much as the board of directors would like to host an in-person gathering this fall, due to the ongoing pandemic and ensuring the safety of visitors and staff, the online auction will be observed. 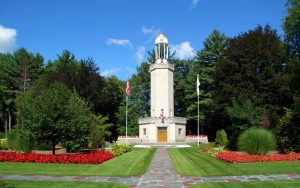 “The auction will include some high quality artwork by local artists and donated items from the community and local businesses,” said McKean. “The auction will assist in the necessary restoration of the Carillon Tower so future generations can enjoy this landmark at Stanley Park.”

McKean noted that bids for restoration work are out and address a variety of issues – from cracks on the facade and ensuring the solid doors open more easily, to the dome that has to be scraped and painted. Additionally, the big steps must be cleaned and touched up and the stained glass windows need retouching.

“We are still in the bidding process,” said McKean. “We want the inside and outside of the building done and updated and we want it to be structurally sound.”

“We are a private nonprofit and when we bid out on big projects we have to be prudent with our funds,” he said.

While there is much work to be done, McKean is hopeful that facets of the restoration project can start in the coming months. In the interim, visitors can hear the Westminster Chimes from the Carillon Tower.

“We have a sophisticated remote system on my desk,” said McKean, adding he can also play a variety of songs for certain ceremonies direct from his office computer.

“It is very slick,” he said, adding that organist Joe Geehern is also available to play the electronic keyboard for special occasions.

While McKean is at the helm of the park, he acknowledges the “great team” he works with that ensures that Stanley Park remains a treasure in the city.

“I’ve been successful for 13 years because of the great team we have here,” he said, adding, “We also have incredible volunteers and a dedicated board of directors who all work together.”

“As with most everything, age takes its toll,” said McKean. “This combined with deterioration resulting from the severe weather conditions of New England, there is much work needed to restore and preserve the overall condition of the Carillon Tower.”

McKean noted that the project will address the necessary work to increase safety to visitors and to ensure the well-being of the tower.

“Stanley Park’s Carillon Tower project will help to ensure that it will be around for generations to come,” he added.