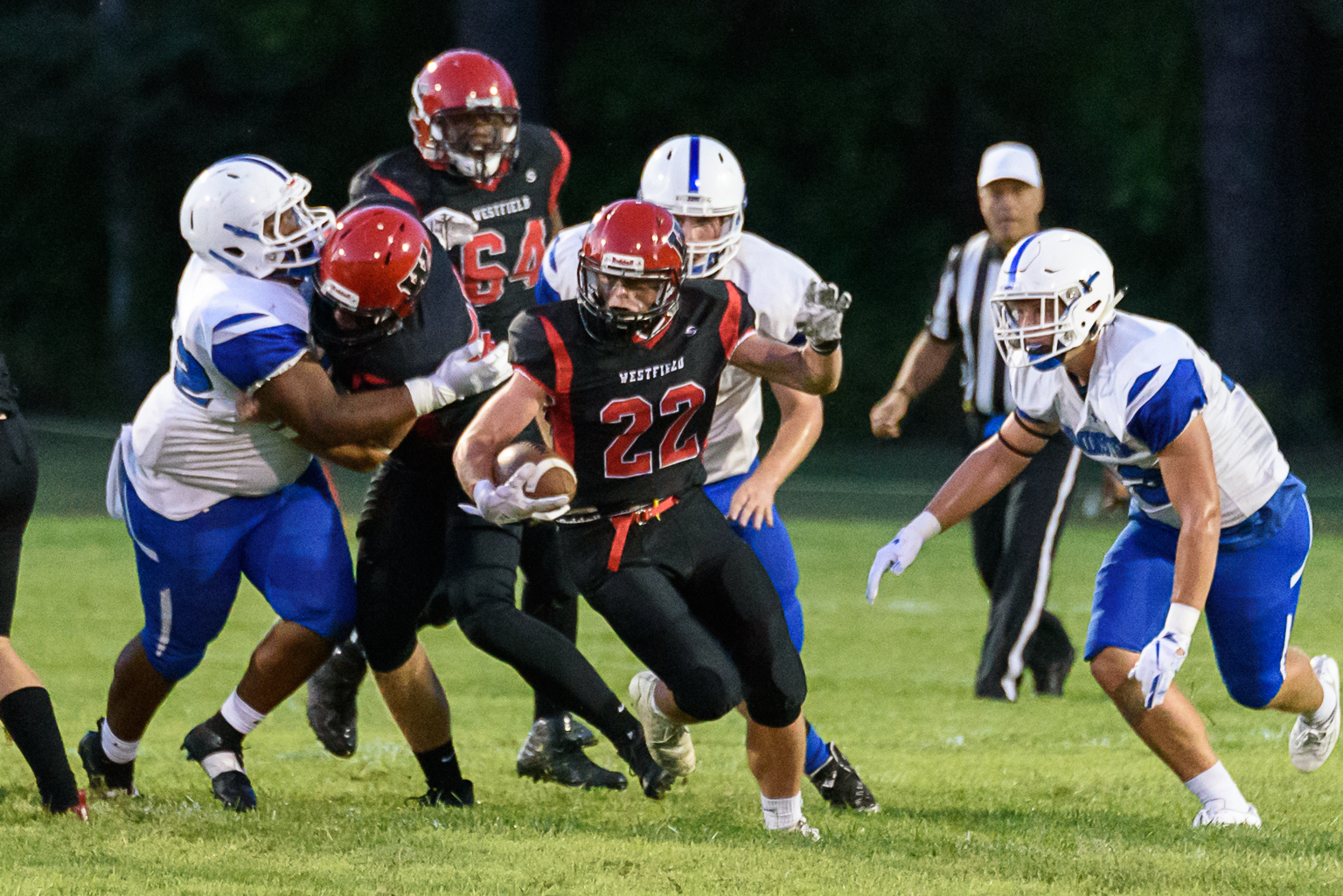 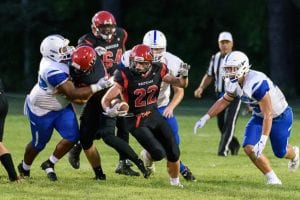 WESTFIELD – Chalk it up to it being Friday the 13th, a full moon or what have you, but the Westfield High School football team was left staring at a 1-1 record two weeks into the 2019 regular season.
The latest version of Friday Night Football was far from a boxing match but the Leominster Blue Devils delivered a one-two punch, ringing up a 34-6 win over the Westfield Bombers Friday evening at Bullens Field.
Leominster junior quarterback J.C. Cora rushed for two touchdowns and tossed another, and Voshon Dixon had a pair of touchdown runs as the two Blue Devils combined for nearly 300 rushing yards.
Leominster began its methodical offensive push from the outset, marching 47 yards in 12 plays on the game’s first series. The Blue Devils capped it all off with a 2-yard touchdown run from J.C. Cora at the 6:40 mark.
Westfield responded with an early score of its own.
Taking over from their own 34 to begin their first drive, Westfield went 64 yards in four plays. The series culminated in a 52-yard touchdown run from Bombers senior running back Nick Clauson that made it 7-6 with 4:20 left in the first quarter. The extra point failed.
While the first two series were run to near-perfection – – Leominster drew just one penalty while Westfield had none – – the game quickly devolved into a penalty-strewn affair. The next two drives (one from each team) resulted in 11 yellow flags being thrown.
The two teams settled down late in the first half in time for Cora to connect with Jayvie Rodriquez for a 6-yard touchdown strike. Rodriquez got separation from his defender along the right sideline and caught the ball in stride around the 25 yard line, streaking to the end zone to complete the scoring play. The Blue Devils led 14-6.
Leominster carried its momentum into the second half.
Cora intercepted the ball near midfield to end Westfield’s first drive of the third quarter. Five plays later, Cora ran the ball 36 yards for a touchdown with 8:27 remaining in the quarter. The extra point made it 21-6.
The fourth quarter featured much of the same.
Dixon crossed the goal line from 10 yards out on a rushing attempt to make it 27-6 with 9:10 remaining. The scoring play was made possible, thanks in large part to a 45-yard run from Cora.
Dixon scored again from 37 yards out with 4:24 left to close out the scoring.
Westfield will have two weeks to regroup. The Bombers come off their bye week for a two-game road trip, beginning Sept. 27 at East Longmeadow, followed by a game at Agawam Oct. 4. Both games kick off at 7 p.m.