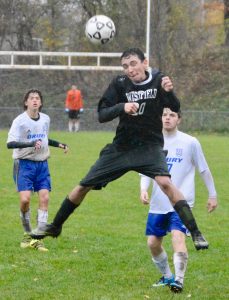 NORTH ADAMS – No. 4 Drury slipped past fifth-seeded Westfield Technical Academy 3-2 in a rain-soaked West Division 3 boys soccer quarterfinal Monday in North Adams.
“It was a heartbreaking loss,” said Westfield Tech coach Kyle Dulude, who saw his team give up two bad-luck goals late. “We just couldn’t find a way to prevent their shots from the outside.”
Drury gained control of the game early with a goal midway through the first half. Westfield Tech later tied it 1-all on a great shot from Philip Lisyanyy.
Westfield Tech took the lead 2-1 on a corner kick half way through the second half, but Drury scored consecutive goals in a brief spurt to jump ahead. The Blue Devils converted a direct kick from about 40 yards out, and then with four minutes scored the game-winner on an upper 90 shot from just outside the box.
“A lot of the game was cold, wet, and sloppy, everyone slide tackling everywhere,” Dulude said. “With eight minutes left in the game, every bounce, call and flick went in favor for Drury.”
Still, the Westfield Tech coach admitted his team had its chances early.
“We missed a few good opportunities to go up 3-1 and it came back to bite us in the end,” he said.
Despite the loss, Dulude was pleased with his team’s overall effort.
“I appreciated the effort they put in all season long,” he said. “For the seniors, they showed tremendous growth over the last four years. And for the underclassmen, we have a Bi-County title to defend, as well as postseason experience to push us further next year. Overall, nothing to hang their heads about, all learning experiences for their futures.”