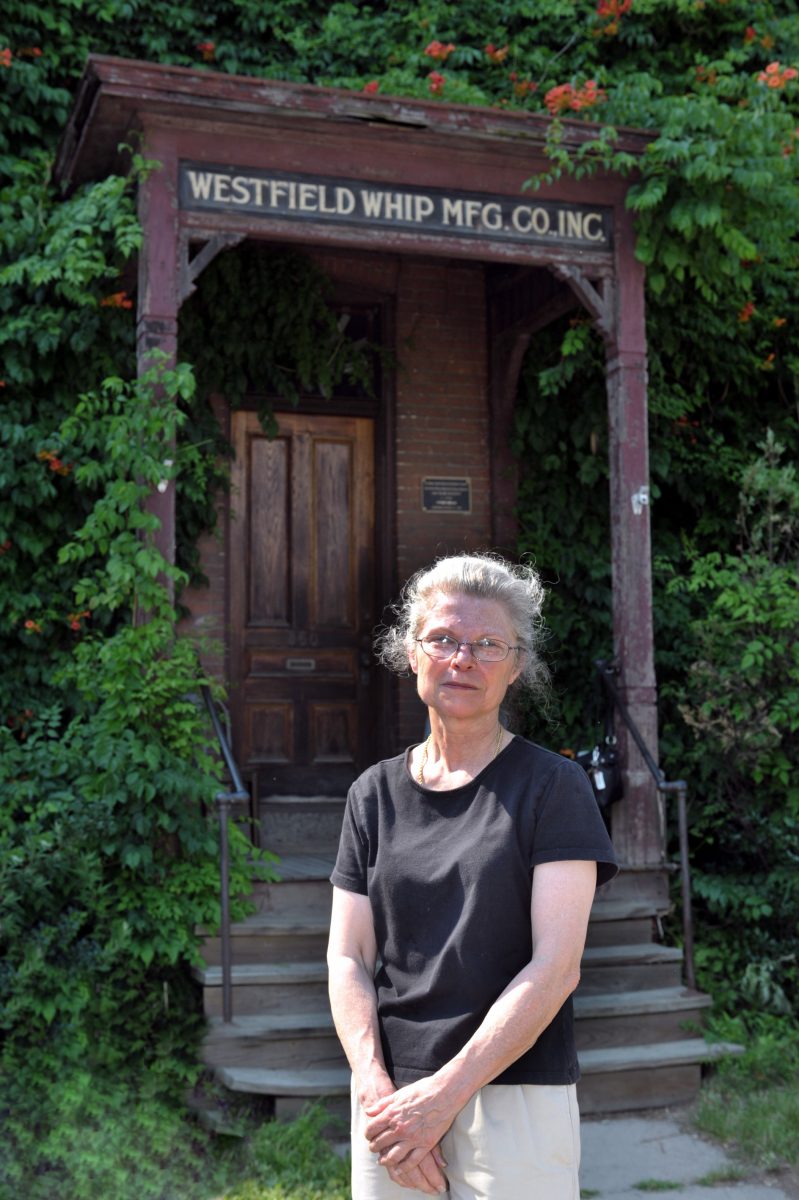 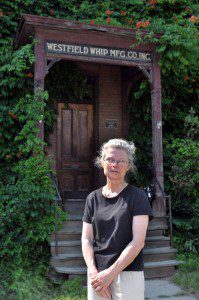 Carol Martin, owner of Westfield Whip Mfg. Co. Inc., stands in front of her company located at 360 Elm Street in Westfield. The factory was established in the late 1800’s. (File photo by chief photographer Frederick Gore)

WESTFIELD – The Community Preservation Commission declined Thursday night to embrace a proposal to fund $777,470 to refurbish the exterior of an Elm Street building being proposed for a museum displaying the city’s industrial history.
The committee voted on July 12, 2012 to accept a feasibility study to create a living museum to preserve the city’s historical industrial past, clearing the way for the next step in developing the museum proposal, the request for funding presented last night to refurbish the exterior of the structure constructed in 1880.
The museum concept was initiated to create a living museum at 360 Elm Street, the city’s last whip manufacturing building, but has since expanded to include the diverse industrial past of Westfield.
The CPC had awarded $72,500 in 2010 to Westfield Historical Industries Preservation Project (WHIPP), Inc. for the feasibility study to develop a business plan and assess the viability of establishing the museum.
Carol Martin, whose family owns the Westfield Whip Manufacturing Company located at 360 Elm Street, said at the July meeting that WHIPP, Inc. recently merged with Westfield Museum Inc., a group formed to showcase the city’s industrial history, thus expanding the scope of the original living museum concept to include a display area that will be used to other aspects of the city’s industrial past.
Martin appeared before the CPC Thursday night to present the funding request of Westfield Museum, Inc. and introduce architect Kevin Shea of Architecture EL of East Longmeadow who presented the specific details of the project. The city’s Historical Commission has voted to place a historical preservation restriction on the exterior of the structure which is intended to preserve the appearance of the building in perpetuity.
Shea said that the building would be repaired using similar materials to those on the original structure. The slate roof and masonry would be refurbished, existing windows restored as possible.
“The building is part of working history, an important piece of the museum,” Shea said.
The contractor selected for the project, Salome & Son Construction, was selected because of the work done on the sister building at 330 Elm Street for DOMUS, Inc. which converted the former factory to a residential use, but maintained the original exterior appearance of the structure.
The amount requested for the building’s exterior restoration concerned CPC members.
“We’re being asked to fund over three-quarters of a million dollars,” Bill Porter said. “”The issue is the long-term viability of this project. What protection does the city have if it fails?”
Martin said the preservation restriction approved by the Historical Commission will “preserve the one remaining building of the city’s namesake industry.”
Commissioner Dan Kelly said the CPC does not have sufficient funds to award $777,470 to this one project.
Commission Chairman Joe Muto agreed with Kelly.
“I feel those same reservations about throwing that much into this project,” Muto said.
Martin responded that the funding request is significant, but that the uniqueness of the project and relevance to the city’s industrial past make it “money well spent.”
Porter asked if the museum group is pursuing other funding, government and corporate grants.
“I also have reservations for this dollar amount,” Porter said. “Is there the possibility of other funding sources, other participants?”
Martin said that the group is working to raise money, but than many potential contributors want to see a financial commitment from the community. Martin said that the funds being raised will be used for interior work to create the actual museum.
“We’re not refuting the merits of this project,” Porter said, asking Martin to go back to her Board of Directors to see funding request could be reworked and lowered. Martin agreed to that request.